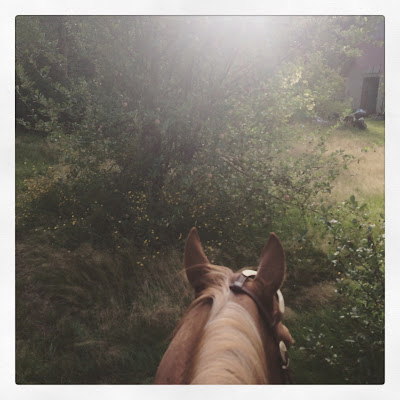 The last two rides I've had on Suzie I wanted to try some different things and how she responds to them. First and foremost, I ditched the new bit I had just bought and returned back to our old one. No sense in trying to get her going well in that when she went perfectly fine in the one I currently have - especially not before a show. Perhaps next year we'll use the new bit more, but for now we will stick to what we know and what is comfortable.

We worked a bit more on the piecing together the spins and even worked on some roll backs (from the jog). She is getting it and is becoming more and more consistent which is great. I did notice that after we did some loping she was fired up a bit in the contact for jogging, but I made it work and really pushed her for some quality.

On Sunday, I opted for more of a "Western Dressage" day than anything else and I really hammered down into our transitions, getting a nice jog and "frame". I wanted her to bend through the circles and really settle into a quality jog. The problem was that the pasture is bumpy and is not flat, so there are small includes where she would reach her head up to climb up the incline. So, it wasn't ideal for being consistent. 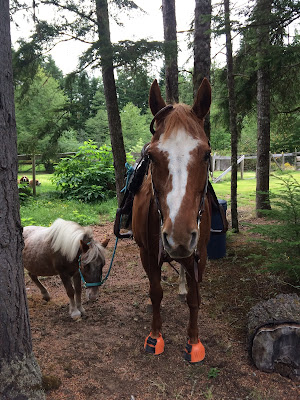 But despite having to work in a cramped "arena" with less than desirable terrain, Suzie and I prevailed after we had a few arguments over our walk-jog transitions. Mare wanted to throw her head up before going into the transition and fought with me as I applied rein and leg and continued to push her forwards.

After we had decent walk-jog transitions, I moved to jog-lope and finished off with some rollbacks at the lope down the long side of the pasture. She did well and although she doesn't necessarily pivot in them, she does as well as she can.

And lastnight I popped up on the mare and we did some Dressage exercises and ran through the pattern again for Reining. Unfortunately, we had a pretty shitty pattern because Suzie decided to porpoise her head into my lap and act like a gymkhana horse. So I went back to schooling her instead of fighting and fighting and she settled a bit... but not much. We ran through it twice and our fast lope circles were just a huge fight - she was not connected through the bridle, was hollow, and just braced against me.

She knew the pattern.

So, I had to go to the other end of the arena and threw the whole pattern out the window. I had to mix it up and "surprise" her so she wouldn't know what was coming next. This really seemed to work well and she responded MUCH better. It still wasn't 100%, but I found that our slow lopes are really coming together so I was pretty happy with that. I just have to remember that fast lopes don't have to be gallops like the pros - I can just simply do an English canter and call it a day.

- Remain calm and relaxed; it really helped me when I was struggling for a good walk-jog transition. Our jog-lope transitions came out much better because I was able to relax and focus.

- Lift the reins and apply leg during the walk-trot transition, as well as the jog-lope transition. Apply the rein and direct her INTO it with my legs.

- When cueing for the lope, remember to SIT and engage the outside rein when asking.

- Remember to pause after the maneuvers in reining.

- Don't pretend to be a pro Reiner when we ain't one. The fast lopes do not have to be gallops.


And with that, the horse trailer is packed and we head out this afternoon for the BVX.  It's an accurate guess that you guys probably won't hear from me until Monday unless you follow my Instagram account. Please send us good vibes for a positive and fun show experience!