It’s almost like my last blog post was tempting the fate of the worlds and was meant to serve as some sort of reminder that irony works in mysterious ways... Thankfully, it has nothing to do with Suzie – she’s fine, I’m fine. But, it sounds like my work schedule is going to be changing in September and what would have been days off are simply no longer.

So the show in September I was planning on attending and competing English in? Yah, looks like I’ll be working. Not necessarily as saddening as it sounds, because I was a bit frustrated that Suzie and I were doing so well Western and then I’d have compete English in September since the show isn’t going to offer any Western classes. I understand, but gah! 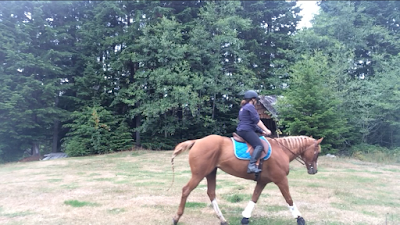 Of course, I haven’t received an iron-clad answer but the gist is that hours and days are changing pretty fast. I work in Construction, so this isn’t necessarily a surprise or alarming to any of the Craft or Non-Manuals like me. This flip-flopping I’ve been doing between showing English VS Western is seriously getting old and I really only have two options at this point.

If I want to show Suzie Western, it’ll have to be at the BVX where there is a multitude Western classes available (including “Beginner Reining”). The Breed Show I am attending this coming weekend does not have “Beginner” Reining classes (and I honestly have no desire to show in Western Pleasure) so that’s one of the reasons I’ll be competing English. One of the other  reasons is the simple fact it’s a Breed Show and English/Western classes are pretty similar in sense of movement and head carriage. And lastly, it’ll give me a good idea of what Suzie will be like in a “real” show setting since the BVX is the biggest of them in my area.

So I have some thinking to do. Do I take Spud to compete in Driving at the BVX or do I take Suzie?

The deadline for the BVX is August 15, so I have until then to decide. No pressure or anything.
Posted by Cathryn at 8:20 AM