Mini-Pony is Back in Action

After an exceptionally and unintentional hiatus from the cart, I hitched Spud back up on Sunday evening. Initially, I was just going to ground drive him but the BF convinced me that even after nearly 1.5 months off, Spud would be good as gold. 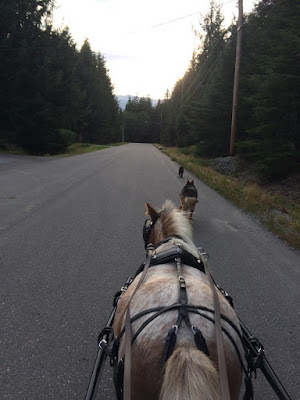 You could tell he was a wee bit rusty, but that was more or less by default. He's green and hasn't been rigged up in a while so he braced a bit and leaned into the halts more than he should've. And in truth, the drive was relatively simple and I didn't ask much of him other than to be steady. He was more than happy to oblige and trekked home like the golden child he is.

Thank goodness, because two days earlier he made me want to send him to the auction (I kid). Basically, I tried to bring him and Suzie back into the barn after grazing in the front for a bit. Spud decided he didn't want to be caught and instead of just staying within the area, the little shit-head decided to gallop down the driveway and onto the road.


It went from me following him quietly and calmly to chasing him so he'd get off the fucking road. Then after I managed to get him back into the backyard I spent the next 25 minutes walking him down because he figured I was going to kill him. I ended up cornering him with the help of Ty and haltered him. He got loose and took off galloping again...


I caught him and did some "roundpen" work to defuse him (I don't have a round pen so I just "lunged" and made him switch directions and that). It worked after about 10-15 minutes and I turned him loose afterwards.

Thank god he wasn't a shit-face for our "first drive" back into it.

We also re-furbished Spud's carts single tree. BF and I sanded and restained it after filing down some of the edges so the traces could attach in easier. It looks pretty darn dapper, considering. Now we just need some badass wheels to go with the whole set up.
Posted by Cathryn at 7:38 AM