I've been absent from the blogging community for the better part of a week (and truthfully, haven't even had time to rationalize and prepare my August "goals" list... yikes!). Never fear, because I come bearing good news, a slight cliff-hanger (holding out for some media and a re-affirmation on my placings) and minimal photos.

Mostly this blog post is about the plans I have for Suzie this month and what we hope to achieve. I will be blogging about our last show, which was on Saturday, and re-capping what had happened and how we did. I am still waiting for a list of our placings and hopefully a photo or two, so I'll hold off for another few days. 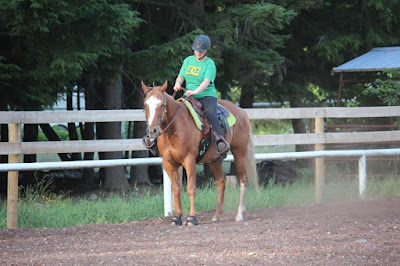 But the exciting news is that I have officially decided to take Suzie to the BVX fair this year! Remember the show I took Tally to? Yep, that one. Initially I was going to take Spud in it for the Driving classes, but I haven't even driven him since the clinic in June. The cart needed some repairs and it was slow going trying to get it all sorted out. Partly because I'm lazy and partly because I've been enjoying riding my mare. I figure Spud needs a few more miles before I make his show debut, not that I am concerned he will be bad, but I want it to be a good experience and I certainly want to get more miles under his belt (especially with other driving horses around us, which is something he struggled with in the clinic). Little Mini-Man is 5 - he has many years of driving left in him and it certainly won't harm him to not be shown this year.

I've just completed the entry forms for the show and I've decided to take it easy this year with the class-load. Last year with Tally I just felt so rushed and drained - I chose way too many classes and paid the price in the end (Tally didn't care though). With Suzie, I'll have to be very careful that I: A) make it a pleasant experience and B) don't overdo it. These factors will play a huge role in our success. 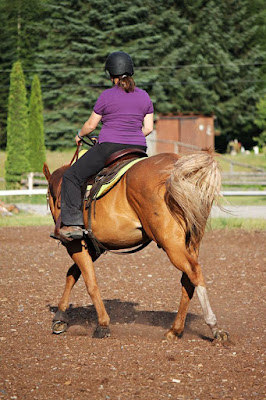 She get's hot and tense in the show pen (literally the show PEN. She is just fine in the warm up... as I will divulge into with my Show Recap blog-post) and after talking with a few friends, the only way to fix this is to SHOW! She does not exhibit the same level of tenseness and hotness in the warm-up arena as she does in the ring. So, taking her weaknesses into consideration I've come up with a plan that will give her plenty of time to absorb the area, as well as time for us to shine (hopefully?).

The plan is to load up and haul out the Wednesday evening after work and let her get settled at the grounds. She's been to the grounds before (remember, I brought her with me when I took Spud for the Driving clinic) so she is familiar with the stalls and HAS been stalled there previously. It won't be a shock for her other than this time there will be much more activity going on. Hoards of people, children, dogs, horses, cows, etc. Mayhem and panic and all that.

Thursday morning will be our strictly in-hand showing day. I've signed us up for two classes of Halter and two classes of Showmanship - it's something easy, fun (somewhat), and low stress for any horse. It'll put us into the "competition" mode without jumping in with both feet. I plan on schooling her at the grounds during the evening on Thursday to see where she is at. I don't think she'll be bad at all - she'll probably be quiet and calm just like usual.

So for Friday I amped it up a bit more with two Western Dressage Training Level tests. Barely anyone around here rides Western Dressage so there won't be a huge amount of spectators (I remember last year when it ran there was literally no one over there watching), I won't feel nervous about other competitors, the warm-up arena won't be crowded or highly stressful, and we will be in the arena alone (ie. no other horse's to ruffle her feathers or cause shenanigans). It'll be a good indicator of how to proceed and what I need to work on. 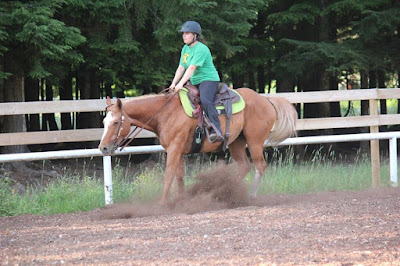 Day three is a bit undecided still, as I have absolutely no desire to go into Western Pleasure classes or Horsemanship classes. Just not interested in the crowded warm up arena and being in the ring with other horses (you'll understand why in my show recap). I want this to be a good, positive experience. I don't want to push too hard... so I tentatively signed us up for one Trail class. If she is feeling good and quiet, I'll go in it and if not we'll scratch. This will be our only class for the Saturday, which leaves me a lot of free time to enjoy the fair, as well as school before our other classes on Sunday.

Which brings me to Day four - Reining day. I've entered four Reining classes and all are "Beginner" classes because I'm an idiot and can't ride with one hand. It'll be a good experience because we'll have more spectators, more horses around us, a crowded warm up pen, etc. I feel like on Day four she should be ready for this. And as if tempting fate, I've signed up for a Reining Freestyle as well.

It may not all go as planned and I don't want to get my hopes set entirely too high. But I feel like I'm giving her the best possible shot at success and sometimes we just have to run with it. Life is too short to be afraid or play it safe. My horse isn't dangerous, I'm a little crazy.... so let's do it?

Email ThisBlogThis!Share to TwitterShare to FacebookShare to Pinterest
Labels: showing