The weather has shifted to the other extreme - rain, wind, and more rain.The sun will gingerly peak it's head out between the clouds every so often but it sneaks away as quickly as it has surfaced.

The horses have been enjoying a bit of a break - which in part was due to the weather and partly because Suzie started to look a little less voluptuous. I am not certain why she started to look less "full", but I intended to start fixing it immediately. Mare was put on a concoction of grains which included: 2-3 cups beet pulp (measured before adding water), 2 cups alfalfa pellets, 1 cup sunflower oil, 1-2 cups ProFibre Crunch, and 1 cup Dr Reeds Minerals. It was quite the feast!

Having been on this new feeding program for about a week now, she is starting to look much better and I've also upped her forage intake. Although, both horses have decided that once the hay touches the ground it must be contaminated and they cannot eat it. Cue the hair pulling!

I hopped up on Suzie Wednesday night for our first ride since the whole "sink hole" scenario. She was pretty forward - eager to get out and even more eager to get back home. I hacked out in the English saddle and we went over some exercises at the arena. She was VERY forward (pretty sure it's all that alfalfa she's been getting) and seemed a bit stiff in some spots. We worked through most of it and she gave me a really soft and uphill canter that I could really FEEL was uphill. I wasn't able to get much quality work out of her since she wanted to be pretty bracey and FORWARD on me. 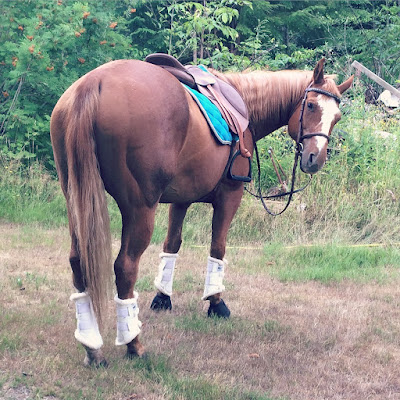 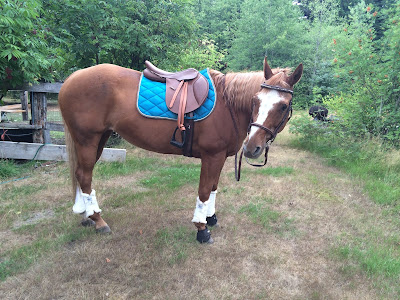 We have quite a bit of work ahead of us before the show on August 8th, so I really need to buckle down and commit to a working schedule of some kind. Too bad I've barely been able to walk since I've started this new work-out program (Tylenol extra strength has been my friend for the last two days).

Spud hasn't been driven in a billion years because the cart is still in the garage at home. We have to fix the single tree before it goes back out and I just haven't gotten around to doing it. So, little pony has been in lunging boot-camp which he is surprisingly very good at. 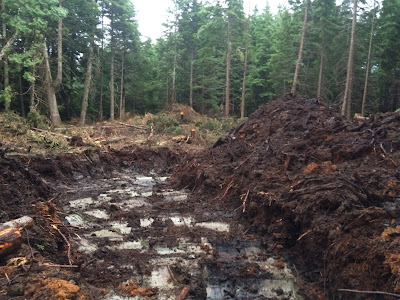