I woke up later than usual on Day 2 of the clinic, although I am certain that could be attributed to the fact that our neighbor's pony gelding would not stop whinnying and neighing. All. Night. Long. I felt so groggy and run-down while I fed both Suz-mare and Spud. Since I was running behind and had assumed my lesson was at 11am as per the Facebook Message I had got from the clinic organizer, I was a bit flustered. But when I saw our overnight neighbor getting her mini ready around the same time I was ready to pull Spud out, I asked, "What time are you riding at?" (I should've said 'driving', but I do not has driving-clinic-esque). She replied, "Eleven."

I wandered over to the Driving Arena where the clinic organizer was driving her Welsh pony and I asked as she was exiting the arena what time I was sheduled in. "Just like yesterday, three." I nodded and went back to the camper and re-checked my phone... Odd. I was told eleven.  It didn't matter much to me though, so we rolled with it.

The clinic atmosphere was very different than what I am normally used to. There were only 4-5 of us in the clinic (one woman was driving two of her horses separately) and the clinic ran from 11am - 4pm on all three days. I'm used to 7am - 7pm type clinics, but understand that Driving isn't a huge sport in my area either. In addition, everyone was super laid back and just chill... I remember waiting outside the gate to be called in for my lesson and the clinician said, "Wow! You are all ready to go!" Erm... yes? I'm used to English clinics where, if you aren't ready, you are wasting the clinicians time and you should just go home. It was nice that they were so laid-back and accepting of me and Spud, though. I got all kinds of nice compliments on us, which was so inviting.

Since I had time to kill I went to see the horses and when I got to Suzie I realized... whatthefuck. Her hind leg (white one) was puffy and swollen around the pastern area. I immediately went to inspect and saw that she had an injury which looked to be consistent with rope burn - y'know, the rope she BROKE the other day while tied to the trailer? Mostly it was skin that was peeled back and it wasn't too malicious looking, thankfully. I brought her out for a hand-walk, cold-hose and a dose of Previcoxx. I wasn't too concerned it would make her lame, as I knew with movement, it would help the swelling to go down.


After hand-walking a bit I put her back in her stall and the BF and I headed into town and stopped by a Biking store where I bought some shin guards that actually fit me and a breathable shirt. Next stop was at the local Feed Store where I loaded up on minerals and grain, bought a 100gallon water tub, western spurs, a new lunge line (since Suzie broke mine) and fly spray.We got back to the Grounds in enough time for me to tack Spud up, get him hitched and warm up for our lesson.

I got Spud ready closer to the arena, as per the clinicians instructions (aka: not tying to the trailer and hitching!) with Jamie standing close to him just to make sure he wouldn't walk off. Ialso stressed that Spud needs to learn to STAND for being put to the cart so that I can literally hitch him in the middle of the street if I wanted to. She also said the same goes for when I get into the cart - he needs to learn to just stand and stand for however long I want.

He was good for the hitching and I popped into the arena where the clinician had set out a bunch of cones. We worked a lot on bend, balance, and rhythm. Her exercise was simple; make a half circle around the cones and make one of the circles wide and large and the other smaller and more tight. Basically, the clinician wanted us to work on our steering, as well as Spud getting a feel for his own balance. A few times he popped into a trot because he was unbalanced and more than once he completely halted. The exercise really made him think and confused him at the same time - he is just a baby still and has a lot of learning to do, after all. He would stop when he got frustrated and would have this, "I don't really know what you want" attitude. It didn't seem malicious, nor threatening. Just... uncertainty.

Clinician had me work through his stop-go-stop-go issues by encouraging him to be forwards and PUSHING him when I felt him slowing down. I was concentrating too much on the turning and making one bigger and one smaller than focusing on his forwardness. We made a pass through the slalom course twice without a single stop which was great. I really supported him with my vocal cues ("Tuuuurrrnnnn" and "Walk-on") as well as praise for a job well done.

After all the hard work of turning, listening to half halts, and balancing himself Clinician had me trot him around the arena twice in each direction to just let his brain ease a bit. We finished the day on that note since Spud soaked it up like a sponge and was really behaving well. I rode him out of the arena and unhitched near the camper and horse trailer, where he stood like a champ (BF wasn't even near us!). 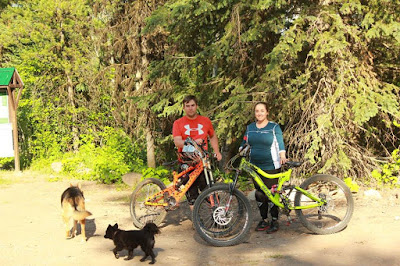 Once he was put away in his luxurious stall BF and I went biking for the next two hours. I ended up doing pretty good, but fell on some shale and got a good slice on my hand where the shale cut right through my gloves!! And I also got some good scrapes up my outer thigh (it is now bruising quite nicely). I was pretty surprised that a rock would cause so much agony! Ow!

When we returned to camp I left my riding shirt on and pulled Suzie out and got her ready to ride, just as it started to rain and the skies began to darken ominously. I wasn't planning on doing any intense schooling given the fact she was injured, but I did want her to move around and get that leg moving instead of standing in a stall (this is why I hate stalled horses, they don't get to move much). BF joined us later on and took some photos, which was nice of him. Overall it wasn't our best school, but it wasn't our worst. I could tell she was sensitive and we cut the ride short and spent a lot of time walking while the thunder and lightning clapped in the distance.

While being put to bed for the night, I gave her another dose of Previcoxx and tucked her in with some hay. BF had already started packing up around the trailer since the wind was threatening to rip off the awning and carry our fold up chairs with it.

I collapsed into bed, thankful for a trailer with a furnace.
Posted by Cathryn at 2:45 PM