Friday morning came quickly and both myself and Jamie looked forwards to camping out for three days with the dogs and horses. The venue, the local fairgrounds, was just over three hours away and my first lesson was at three in the afternoon. I wanted to make sure both horses were settled in, stalls were set up, and I had a chance to fit and evaluate my new harness.

Wait. What did she just say?

Yep. I ordered and received my new Comfy Fit harness for Spud! The dealer I went through was super awesome, friendly, and accommodating. When I placed the order I knew it would be cutting it close to when we had to leave, and it arrived just in time (Friday morning, in fact!).

The horses loaded into the trailer quietly and hauled like a dream - I seriously cannot imagine owning a difficult to load/haul horse! In the same manner they had loaded, they off-loaded like Champs and surveyed their surroundings with moot interest. A pony and another mini were already grazing nearby, set up on a tether system. 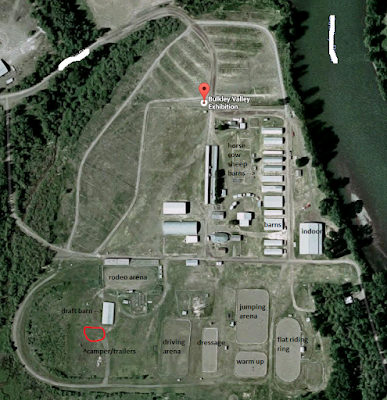 It was actually kind of weird being at these particular fairgrounds and being pretty much the only people there. Last time I was at the grounds, I was with Tally for the BVX show and the fairgrounds then were hopping with several horse show activities, merchants, farmers, and singers. This time, it was only myself, the boyfriend and another lady participating in the clinic who were camping out at the grounds. We set up in the Draft Horse barn which was closer to the Driving Arena, plus had super ginormous and comfy stalls for the horses (and like a paddock for Spud).

After setting up and just getting the horse's settled in (not that they really needed it), I decided to try tethering Suzie up to the horse trailer from a lunge line like the other lady had done since there was an excess of grass to be ate.

Spud was quiet while I rigged him up and made changes to the harness. Unfortunately, I made a rather large boo-boo in tying him to the trailer while hitching (although he was bridled as well at the time). In Driving, this is a huge no-no, apparently. I made my second boo-boo in hand walking him (whilst pulling the cart) to the arena. It was explained to me afterwards, which I was thankful for, and it was done in such a caring and professional manner that I didn't feel like such a nimrod. The clinician also helped me with the breeching and re-fitting the harness to him, which was super helpful.

A majority of the lesson was spent at the walk while the clinician watched how I handled Spud and how Spud interacted within the harness/ cart. First thing I was dinged for was to sit BACK in the cart and have my back against the back-rest. Secondly, the clinician taught me about foot positioning and how it effects the cart when we go around turns - which was interesting to learn. The clinician was surprised Spud was only trained for 60 days and was behaving so well in the clinic, as most greenie driving horses take anywhere from 90-180 days to be decently broke.

She had a lot of nice things to say about him and gave me some wonderful pointers on working on his bend, thoroughness and having him reach down into the contact. It took him about 10 minutes to get used to the new harness but after slamming the brakes a few times because of it "feeling weird", he leveled out quietly.

At one point during the lesson I looked over to see Suzie, wandering away with a piece of the lunge line attached to her halter.... sigh. Thankfully Jamie went, caught her, and tied her back up to the trailer. No more tethering for her. 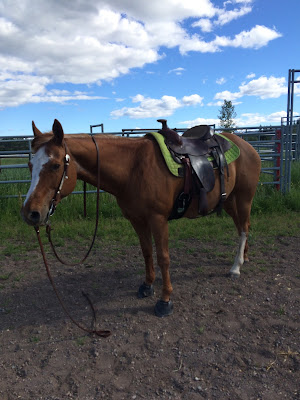 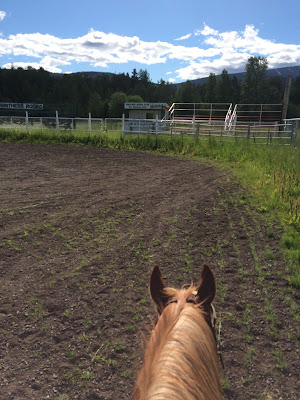 Once Spud was unhitched and put away in his stall I tacked up Suzie and ventured to the rodeo arena. I wanted to see what she'd offer up, considering she can get quite animated and hot when we are at new places and the environment is a bit... electric (ie. shows). I honestly needn't worry because she was ace and if anything, was a bit too slow off my aids and almost ignored (if that is the right word??) some of them. Not in a bad way, but my nit-picking to have her round her corners a bit more was not heeded as well as my cue for canter was, if that makes sense? The easier stuff she didn't have a hard time with, but the more athletically demanding things she did.

I cooled her out and hopped off, checking her legs as I went. I raised a brow when I got to her hind left (white sock) leg and it seemed a little warm, but passed it off as some minor swelling from the trailer ride, standing around, and being in a stall for a better part of the day.

The horses were put up for the night and fed and the boyfriend and I ventured out into the wilderness for some downhill biking - my first foray into the wild world of downhill biking. I came out unscathed, thankfully, but fell a few times and looked like a total dork dressed to the nines in protective gear.

We got back to camp and tried to watch War Horse together but I ended up falling asleep right away and was woken throughout the night by the other camper's very loud, very obnoxious pony screaming and neighing.
Posted by Cathryn at 4:24 PM