The Cure for a Bad Work Day

Yesterday, the work day much left to be desired and as I badged out the turn-style, I knew immediately that some therapeutic horsey time was in order. I wasn't sure if I'd be riding or driving, as I've been tip-toeing around riding Suzie mostly for the fact that she does not have shoes on and can be ouchy over rocks/ gravel. However, I've also made it my new routine to apply venice turpentine to her soles every evening in an attempt to strengthen her hooves and create a barrier. I kind of wanted to test my theory, so I chose to saddle her up. 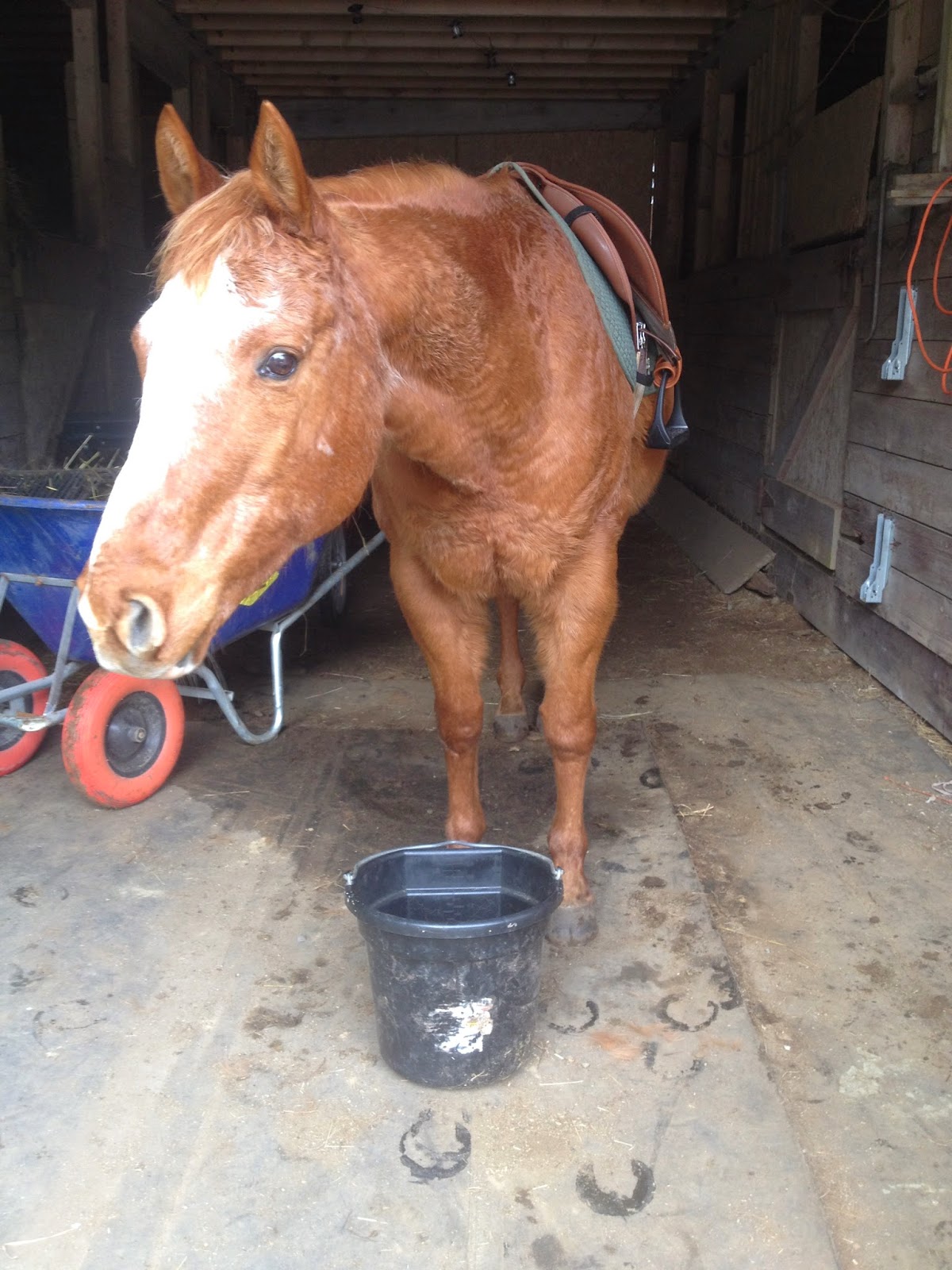 Again, I kept a close eye on her temperment once I brought her away from Spud - not because I am scared of her acting out, but because I want to keep tabs on her herd-boundness and continue to make progress. She was fine and snarfed her beet pulp while I applied the turpentine and saddled up. It made me a bit sad to have to wrap my new leathers, but until I can get my hands on a leather punch it is the only option. The leather hasn't suffered, which is excellent to see, but you can also see just how different the color of the leathers are vs the saddle. Sad face.

We took a short hack out on the roadways and I noticed Suzie was less ouchy on the gravel, which was an immediate plus. But I still cannot wait to get shoes on her, to give her front hooves that added support. I found out the Farrier is actually away right now and returning Monday, so I'll call then. In addition to the hooves, I did feel that she was stiff, especially as we turned to head for home afterthe brief 10min walk hack. Her shoulder seems to be acting up, but it just feels sticky, not lame. If that makes sense. So I wanted to see if she'd work out of it, or if it was something to be concerned with.


At first, I was excited at the prospect of riding Suzie in the back pasture. This time, I intended to keep Spud OUT of the pasture and after he wiggled through the small opening in the gate, I parked the wheelbarrow there and he immediately threw a hissy fit which included bucking, galloping in circles, and head tossing. It was hilarious to watch and at first, Suzie was super perky and intent to follow his lead, but settled down to business relatively quickly.

She was sticky at the trot, as to be expected, and I could feel she was having a hard time with her left shoulder. This is an ongoing issue and because she does not have the muscle or strength behind it, it is hard for her. She attempted to go flat and run on the forehand so I had to really sit, engage my core and bring her back. Once she went softly in the bridle, her shoulder stiffness melted away. But the 20 meter circle I had going for her was hard - which is understandable since it is not level ground (there is a small incline/decline) and circles need bend to complete them properly. I had to work quite hard to actually push her around my leg, but I tried to not nit-pick as much considering this was her second real ride of the season. I cannot expect too much and I cannot push for too much since she is an older mare, coming out of time off, and because she HAS a previously shoulder injury. I am attempting to be proactive and consulted with her chiropractor who is coming out at the end of April to readjust her and reassess.

I feel like I may have the question posed why I am riding Suzie in English gear right now when I intend for her to be Western and intend to show her Western this year. To lay it all out on the table:


Other things to include about our ride was that it was very positive and we had some great moments of engagement where she rounded, went soft, and really reached and tried. However, she is still much like a fish out of water in some sense of the word. When she becomes unbalanced, she rushes and gets choppy. When she rushes and gets choppy, she pokes her nose up and hollows her back. And when she hollows her back, she dumps herself onto the forehand and is like a motoring steam-engine that has no brakes.

We'll get there. It'll take time to build up balance and rhythm (which you will hear me talk A LOT about since I believe it is THE building block for all horses. Without these two things, you cannot achieve engagement or adjustability. We'll start slow and build up. After 15 minutes of alternating trotting and walking, I closed the session with a brief canter straight through the field. Suzie perked up immediately and instead of riding in a half-seat like I intended to, I sat it and had to bring her brain to Earth a bit. She cooled out quietly and on a loose rein, although she certainly felt like she had more to give. But, I hopped off after walking around a bit and stiffled a giggle because she looked SO tired.


Also, today I ordered and paid for the Farrier's Formula and ulcer regime for Suzie - it should be here sometime next week. I'm excited to chronicle our thoughts, findings and to see what kind of changes occur for Ms. Mare. I did forget to include it above, but prior to me getting up on Suzie in the back pasture, she had pooped and it was very loose and unshapen. I did continue to ride and she didn't seem off her game at all, so I wasn't certain if the beet pulp she had eaten 30min prior had anything to do with it, or if our hack off property caused some mild stress. She did munch on her hay quietly with a leg cocked after our ride while I cleaned up the property a bit.
Posted by Cathryn at 3:15 PM