*This post is long overdue but with the influx of posts I've had recently, I felt like I should space it out at least 24 hours.*

Monday after all the chores at home had been dealt with and the lunches had been made, I took haven at the barn for the better part of an hour. Initially, I had wanted to ride Suzie again but I know that her left front hoof really, realllly does not like going barefoot. She's fine on the soft grass, but otherwise, because it seems like she has a flatter sole on that foot, she is more sensitive to it. I made the decision to take Spud out instead, which proved to be useful in the sense of testing Suzie's ability to be left on her own.

I mentioned in my previous blog post that I was interested to see how Suzie would act if I hacked her out alone and if her buddy-sourness would peak again. The last two years of owning her has gone in a pattern - every Spring she turns into a fire-breathing monster for a week or two and absolutely cannot horse. It's not a surprise when I encounter it, but it is interesting to read back and see similar posts or remember similar buddy-sour incidents with her in the Spring-time. And it wasn't just undersaddle.... If the other boarded horses were to go out on a trail ride, she'd pace the fence and call out like a crazed behemoth.

Us being gone for an entire week could easily have spiraled her back into her "I'm-not-leaving-my-frands" mantra, but the hack out on Sunday wasn't as malicious as our disastrous trail ride a few weeks prior. I had hope.

I pulled Spud out of the back and Suzie gave me the hairy eyeball as I closed the barn doors behind us, leaving her "all alone" with a nibble net full of dinner. Sometimes she'll paw at the door or walk briskly to the front of the barn in an attempt to catch a glimpse of Spud. She did neither of these things and I went about fiddling with Spud - brushing him (they are both shedding and I am so excited) and tacking him up in his harness gear. At one point Spud spooked hard at me throwing the harness over his back and after his legs stopped moving I rinsed and repeated the action. He's had the harness on millions of times and spooking at it is just silliness. 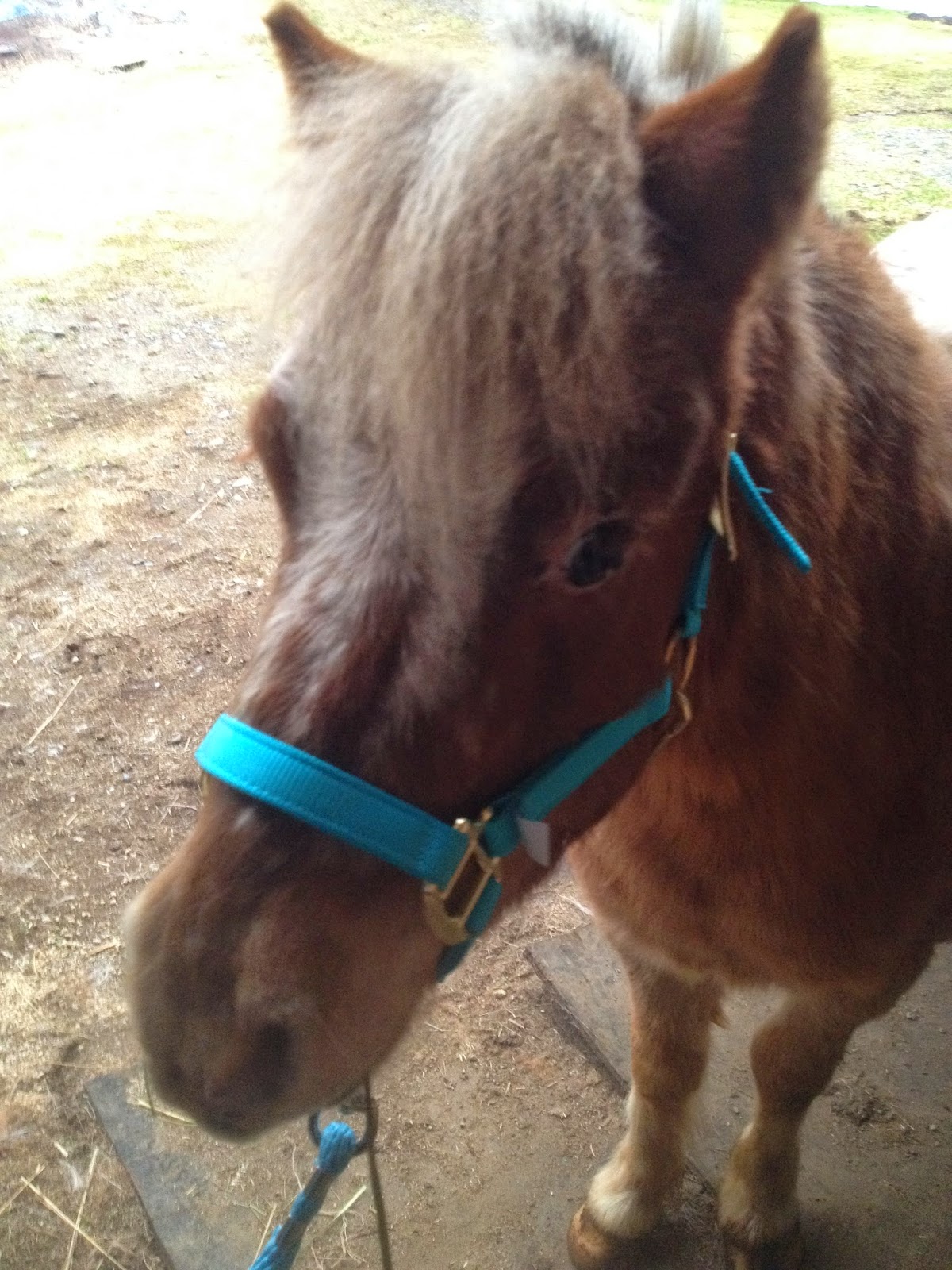 Because it was already starting to get dark, I decided to forgo the cart and hand-drove him instead. We started out pretty level - Spud is still quite green and although I do give him more chances and perhaps am a bit more forgiving to him, I still expect a level of work ethic and a level of obedience. We've been working on bridle connection a bit more and when he gets unbalanced or wants to rush forwards (mostly into a trot), he'll shake his head and resist the contact instead of going FOR it. We worked somewhat on that - really asking him to feel the bit and accept it instead of resisting and getting upset. I don't see-saw or force him to accept it, I only hold the contact there, as if to say, "It's here if you want it." If he doesn't want it, he flings his head and protests. If he does want it, it is a soft, inviting contact that follows him.

I do find that with the contact he starts to lose forward momentum, so I also had to cluck at him several times to get him going forward. I don't want him to think that contact = slow. However, when I did cluck at him, he'd shoot forwards into a trot and immediately get frustrated when I half-halted and "blocked" him. Frustration lead to him backing off the contact so that the reins would have slack and then bursting forwards to try and trot again. He certainly can be very intelligent because it took me a minute to correct him and be two steps ahead.


I tried to ensure that his quality work was rewarded - if he carried on with a nice, quiet trot and was traveling in a straight line, I'd allow him to continue and encourage his way of going. However, he did pop out his shoulder a few times and inadvertently began to drift, which then frustrated him because I refused to "float" with him. A few times I had to truly reprimand him for purposefully sidepassing and hoping I would accommodate him. Instead, I remained traveling straight and brought him back over to me. The few times where he refused and got pissy, I'd line myself up behind him and drive him in a zig-zag, engaging his turning and to remind him he does know how to work off the lines.


We also did some 10 meter circles, figure eights, and serpentines which he was pretty good at going to the right, but to the left he was quite sticky. I found that his shoulder really pokes out to the right and he needed a large amount of outside supporting rein to prevent his ass from sticking to the inside. Instead of curving around the corner he was virtually stepping on the circle boundary with his front right and otherwise, was traveling as though he was going straight. I did end up getting a pretty productive circle from him, but mentally it was pretty draining. Ending on that note, we ground-drove home where he got a bit of a flick on the ass for purposely drifting and attempting to evade contact and then he marched his cute little Appy butt home without any fuss. And to add to the success of our ground drive - Suzie happily munched on her hay while we were gone and didn't even come to say hello when we came up the driveway.

He is certainly going to be a very fun guy and I cannot wait to get him more broke - every drive he is learning something and every time he gets taken out is a learning experience. I need to ensure that it is both a positive experience as well as productive. I truly think to really get the cart performance I need from him, we truly need breeching. And with that, I've already begun ringing some tack stores to order a Comfy Fit harness.
Posted by Cathryn at 2:09 PM