Waste Not, Want Not

I am a very conscious owner in sense of weight-management in my horses, especially now that I own a miniature that is turned out with my full-sized horse. As most horse-owners know, minis get fat off of air, and feed management/regulation is a necessity to avoid obesity, founder, and a whole myriad of problems. In addition, I hate seeing horses waste hay and I hate the clean-up of soiled/dirty hay.

Initially, I was feeding Suzie from a large feed-box that the SO made himself. It worked well, but Suzie loves to throw her hay around like a crazy person to get to the little alfalfa bits that shake loose and fall to the bottom of the feed-box. In turn, she ends up stomping all over the fresh hay and once it’s dirty/ on the ground she refuses to eat it. It becomes a giant pain in my rear when I have to gather up all the wasted hay and dispose of it when it should’ve been going into my mare’s mouth. I actually allowed the wasted hay to accumulate over a period of a week just to see how much they were wasting on a weekly basis. The results were astounding. Two wheelbarrows full of wasted, peed, and pooped on hay. Hay they could have ate. Those two wheelbarrows full of hay also cost money. And I am all about stretching my dollar and coming up with a solution to ensure my hard-earned money is being used appropriately.

Essentially, in my very, very rough graph, if I continue to allow the wastage, I will be throwing away 22% of my yearly cost for hay. In addition to that, I will also run out of hay faster because I will need to feed more hay to ensure they are actually eating enough.

I ran the numbers, and if I continue this path:

I will be throwing away just over $400 worth of hay on a yearly basis.
That’s equal to about 66 bales of hay.
Which would feed my two horses for nearly 33 days.
I’d be losing a MONTHS supply of hay YEARLY.

So, in order to: ensure Spud isn’t over-fed, put a halt to all this hay clean-up, and save myself from spending more on hay than I realistically need to, I devised a simple plan. 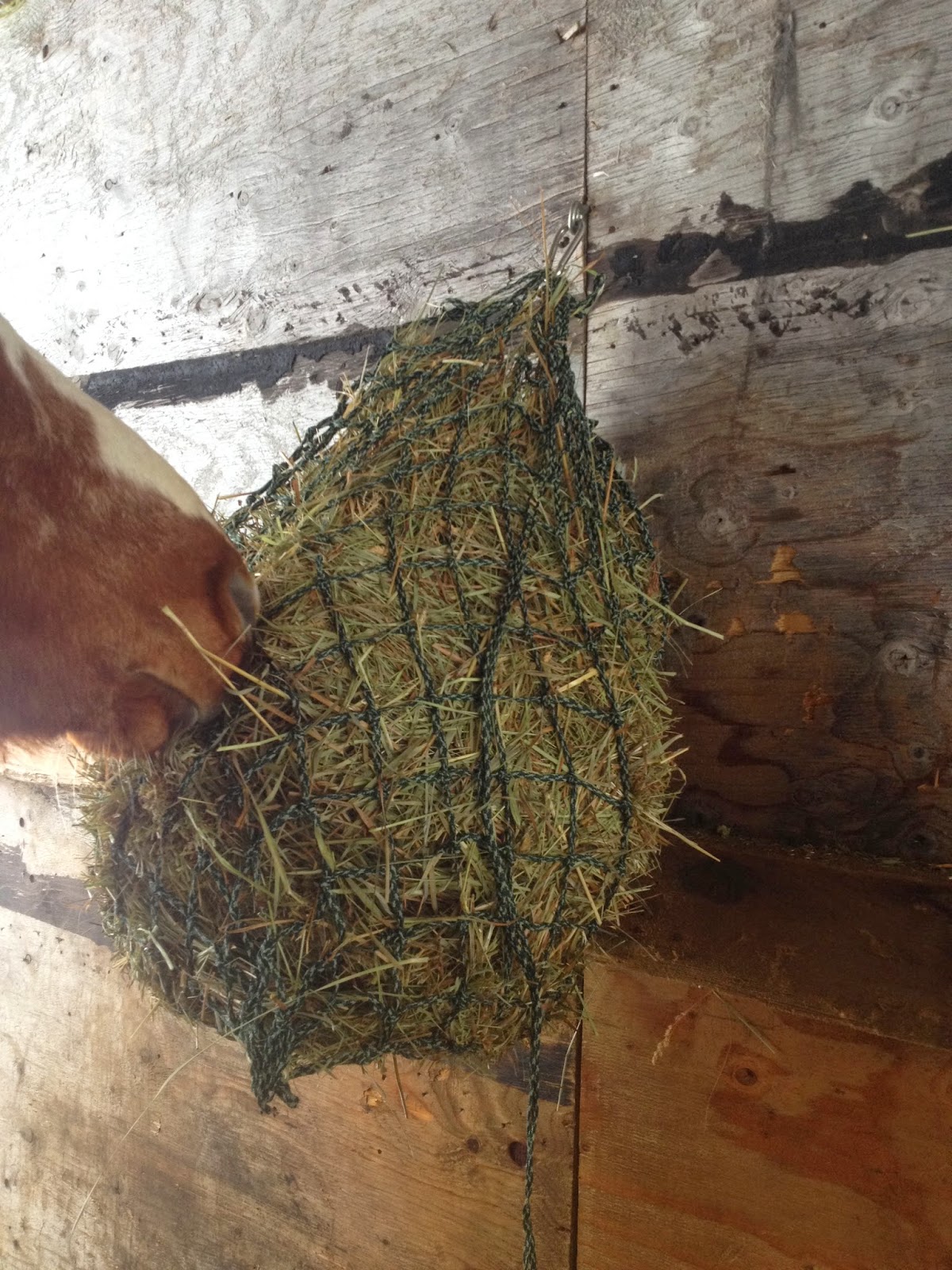 I ordered four nibble nets from Riding Warehouse so that I could start filling them up and have two days’ worth of feedings ready (AM/PM, AM/PM). The problem is that it takes time to rig up the hay-nets and in the mornings, I literally have no time to try and undo the previous night’s hay-net and rig up the next one (unless there is some sort of trick to this?!). So, I bought a carabiner so I can easily just clip the bag up to the metal hook. I also hauled the feedbox over and placed it beneath the hay-bag to catch any hay that drops down. It’s the perfect solution and it has been working out so well for us. After a few weeks of this set up, I no longer have to clean up hay on the ground on a daily basis!

There is barely any hay on the ground and the horses are not wasting any of the hay – all of the hay bags are picked clean by the time their next feeding comes along. It is also great for Spud who is too short to reach most of the hay net, so he picks and samples from the bottom. I think it also helps prevent boredom for them, as they have to actually work for their food. The only thing I am concerned about is Suzie and Spud eating with their necks upwards. I know horses are meant to graze and have their heads/necks down, so I’m not sure if this will cause any ill-effects. It's funny how you have to monitor all of these things when you self-care/self-board. It's all about getting the most bang for your buck, but also not skipping out on what is important.