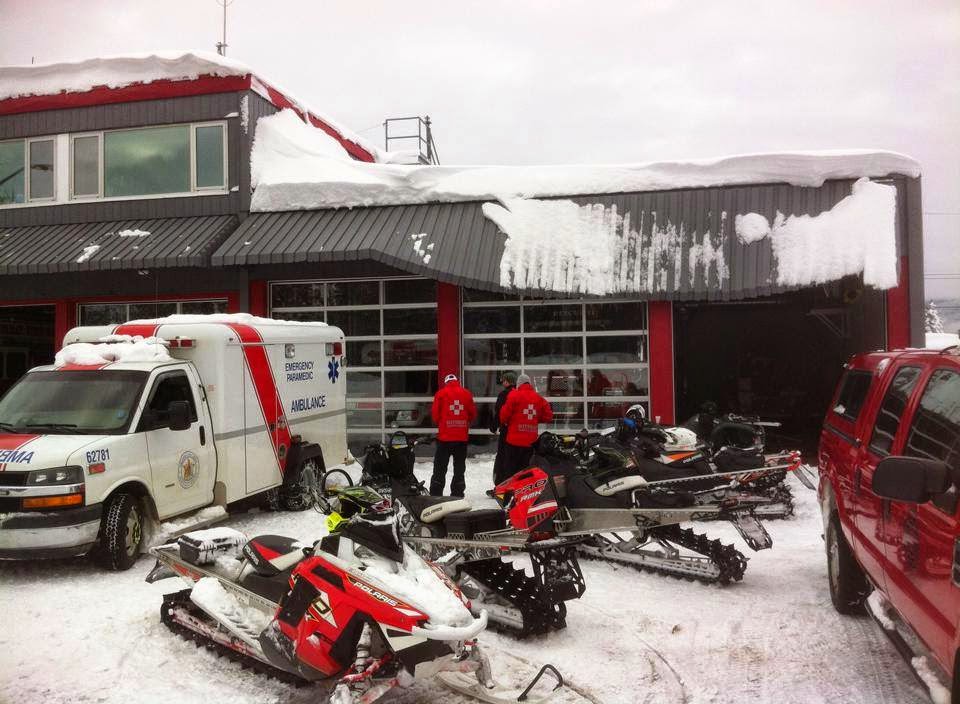 It seems that the worst is now over, although the destruction has been signifigant. Railings have been ripped off of apartment complex balconys, undercover storage buildings have collapsed under the weight, boats at the local marina have sunk (five of them, to be exact), and some resident's rooves are leaking. None of the sidewalks have been cleared and are currently sitting pretty under nearly seven feet of snow and it appears as though there is no concern to be doing them. Our local Native Reserve has been without power for the last four days and residents have been evacuated to a local Hall as the roadway to the Village had been closed for the last two days due to exceptionally bad road conditions. I know a Rescue helicopter was down there yesterday, as we had seen them fly over the barn as we were digging the horses out.

The amount of snow we have gotten isn't what the concern is - the issue is that we have never gotten this much snow in such little time. The loaders, graders, and snow blowers cannot keep up and with the power outages, some of them were without the ability to gas-up again, as the gas stations were without power. People on snowmobiles ripped around the un-groomed streets the last few days, delivering hot meals and food to those without power. Our Fire Station had snowmobiles parked outside it's entrance in case of an emergency - they would bring a toboggan behind them to transport sick/ill patients to the hospital. Understandably, there has been a lot of panic and feelings are running high as panic seems to bring out the best in people. Contractors have been using their own equipment to try and relieve some pressure from our District and assist in the clean up around town. Thankfully, the snowfall stopped yesterday and it hasn't resumed - let's continue to hope it stays that way so we can catch up.


Yesterday when we headed out to go dig out the horses, we had to park in a random driveway and walk the rest of the way in, as it was mostly single lane traffic and the street the horses are living on still hadn't been cleared. My brother, BF and myself went out, armed with shovels and the two dogs. Right before the driveway up to see the horses, a guy and his wife had gotten their 4-wheeler stuck so we helped them out before trudging through the snow to get to the barn. Thankfully, it was more of a goat trail now and it was easier to walk through.

We arrived to the barn and I pulled back the barn doors to reveal two very unenthused and annoyed horses. I started assessing the situation and seeing where to start when Suzie tried to escape - again - and bulldozed her way past both my brother and Jamie. She started to hurriedly walk down the goat trail we had made and Spud followed suit. After yelling "whoa" a few times, Suzie stopped and waited for me to catch up to her with her halter and lead. Spud, however, panicked a bit and went rogue through the snow to try and get back to the barn and ended up sinking in the snow. It was slightly hilarious and a bit sad at the same time, watching him struggle his way out. He did make it out, no worse for wear. And I managed to turn Suzie around and head back to the barn with her.

After that was all settled, my brother and I began digging towards the treeline at the one corner of the pasture. Jamie hopped up onto the roof and after he managed to clear a good section, my brother joined him up there. It took about two and a half hours of shovelling, cursing, and some tears, but we managed to get it done. I threw some hay for them by the trees and they seemed happier to be walking around. The roof got shovelled off, so there is no worry that it will collapse now, which is what our main concern was.

So, for now, things will be ok. The horses are alive and well, they have food in their bellies and water to drink. They don't have much room to move around, but it's more than they had before. The shelter is fully functional and won't be collapsing down any time soon.