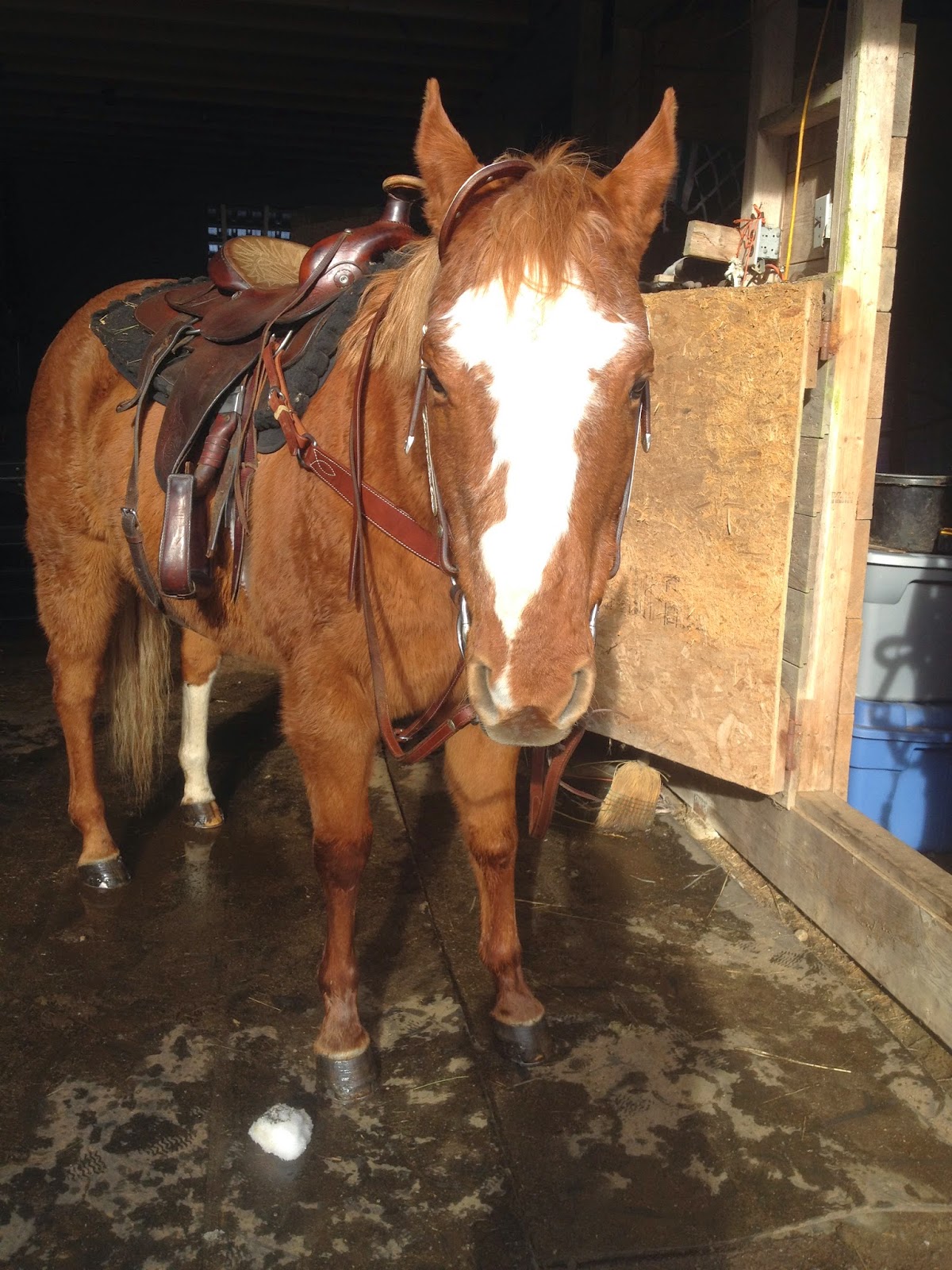 The stars have finally aligned and I was able to ride my mare. I was almost certain that somehow it wouldn't be possible, but hey, sometimes things go right!

**I have to post a disclaimer, there is a photo of gelding sheath smegma below!! You've been warned, lol.**

She was, as expected, a bit nervy leaving her buddy [Spud] behind but settled just fine. At no time during the ride did I feel like she was unmanageable or dangerous - like she was when I first started trail riding her. We only did walk with a couple steps of jog, as the outdoor arena is still full of snow so we rode on the roads.

Since walking around the neighborhood was pretty boring to begin with, I practiced quite a bit of random things: we leg yielded across the road back and forth and I found that she was stiffer/more difficult to maneuver right. Of course, I haven't "ridden" her for a few months, so muscle memory has disappeared. I also did some collecting and extending of the walk by only using my seat and legs, which she did pretty well. I wanted to break up the exercises so I wasn't repeating a single one for the 45min ride because I know how boring it can be! The regular exercises like walk-halt-walk were thrown in and I also worked on flexion and bend - taking the exercise of flexing at 12 o'clock, 3 o'clock, and 9 o'clock while walking forwards. She was much stiffer towards 3 o'clock, which looked more like 2 o'clock... it'll get there, though! 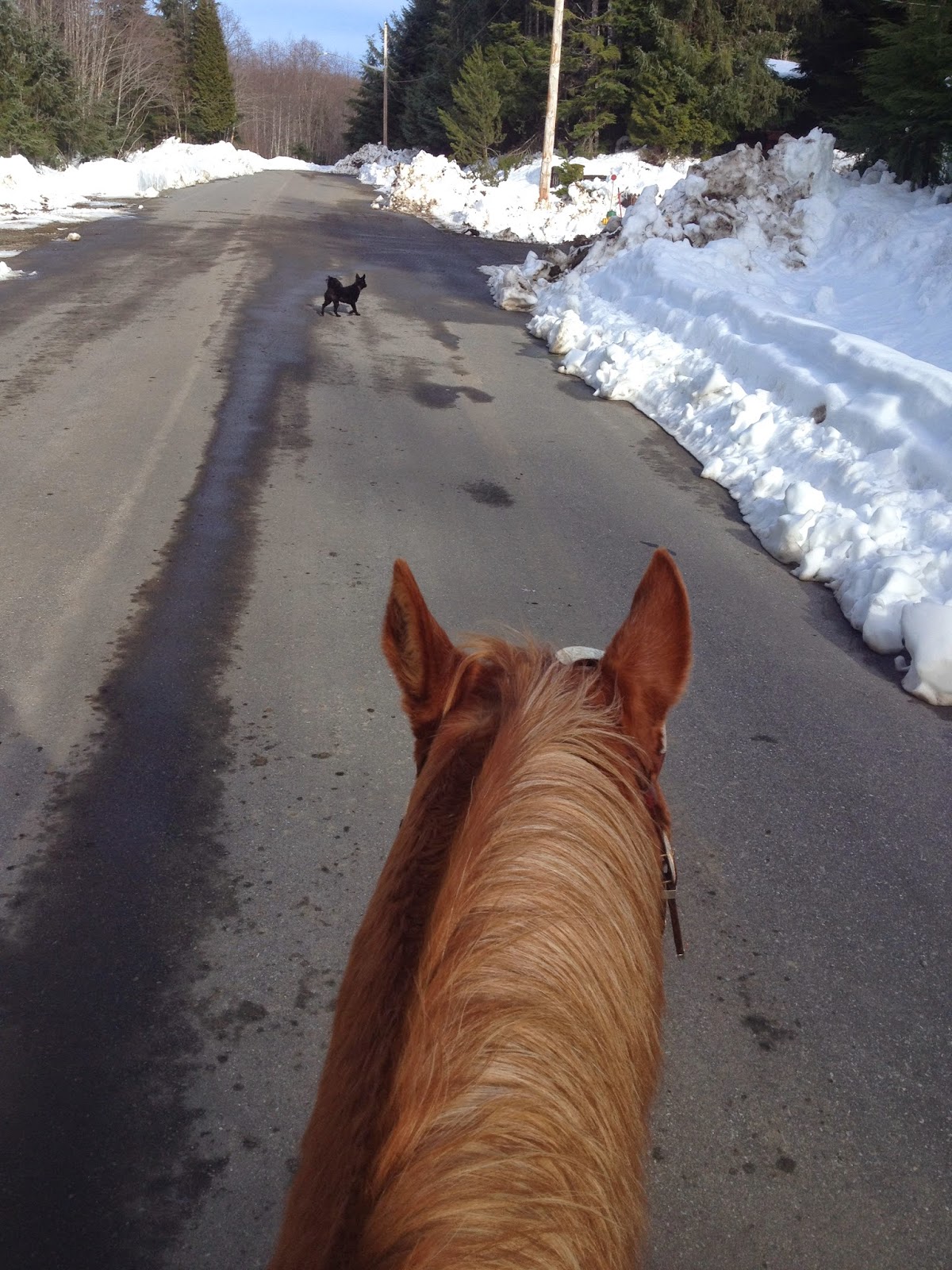 Her responsiveness to the bridle is much nicer this year already! Applying my leg brings her round, dropping her neck and engaging herself in the bridle. There were some cases when I had to apply rein pressure, but it wasn't often. During this engagement, I could feel her back rounding slightly. Of course, all of her muscles and strength are pretty much nonexistant, so I didn't ask for much. Trying to get her to "lower her head" (for lack of a better term) wasn't to have her walking like a Western Pleasure horse - she looked more like a quiet Trail horse (like, the non-professional kind, lol).

I also got to try out my new Western breast collar and BOT pad - the breast collar needs some adjustments and I am going to see if there is a way I can install D-rings to my saddle where the little "flowers" are so I can attach my leather to there. I haven't noticed anything with the BOT pad yet, but she did seem more relaxed and willing to work for me instead of really resisting through the back. Time will tell if it's truly working for her - I am very excited to see what happens! 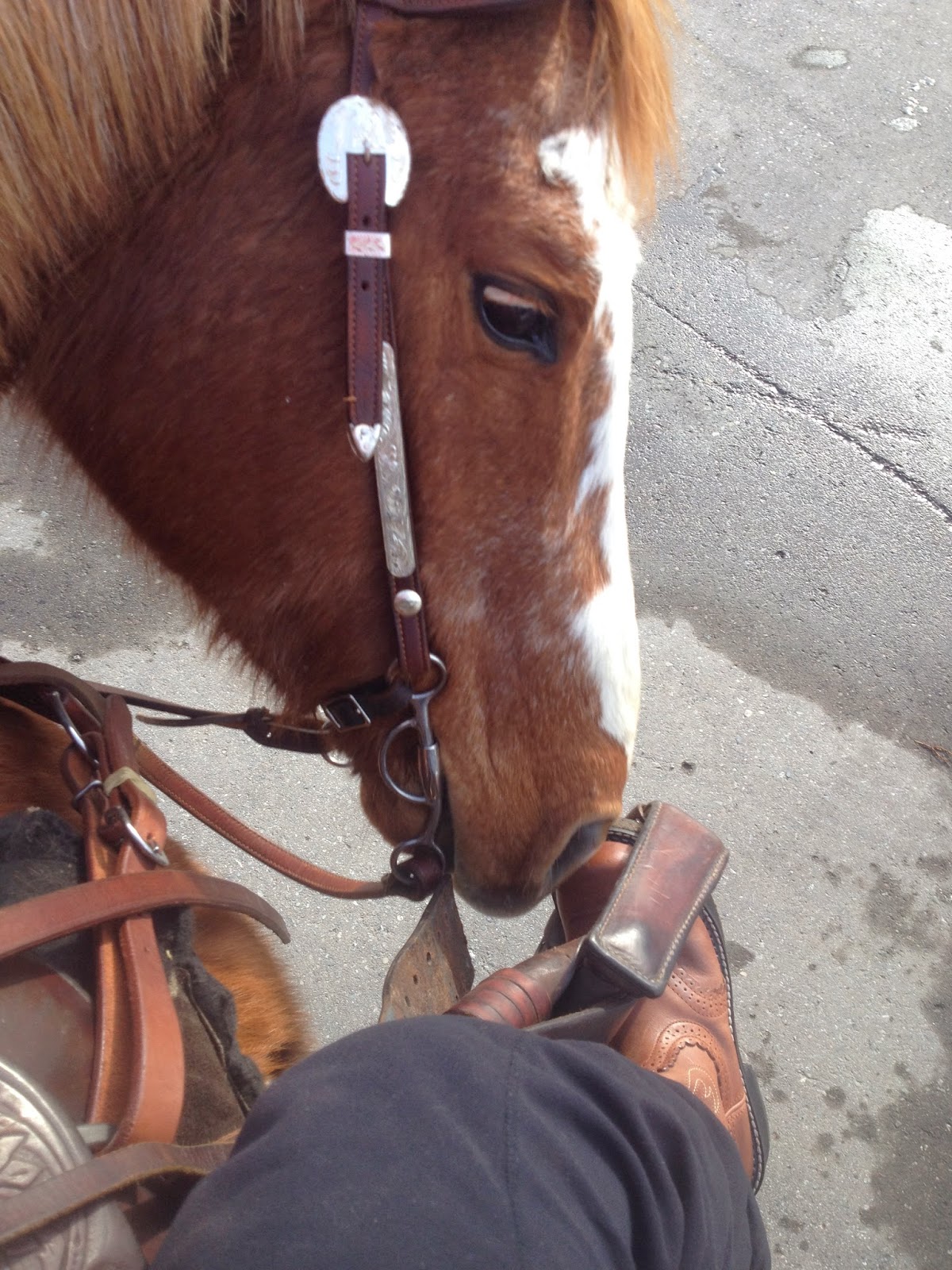 When we returned, I was going to take Spud out for a drive but he literally had mud caked to his underside and I honestly would have felt bad if I made him wear a girth because it would rub on his disgusting belly. So, I decided to sponge bathe him. It is an understatement to say he was bad - I don't think he has ever had a bath before because oh my god, he was very naughty. Total avoidance to me and trying to do everything he could to get away from the freezing water OHMYGOODNESSITSGOINGTOEATME. I must admit, I gave him a "Come to Jesus" meeting and after that, he was a bit better.

I felt bad for him, because I should have spent more time working with him, but it was starting to get late and I didn't want him wandering around in the evening wet/cold. It has been too warm to blanket at the moment, and the only blanket I have for Spud is a super heavy Winter blanket so I wouldn't have been able to make him wear it overnight without him sweating. Despite this, I wanted to try and get him as dry as possible.

Sponging most of the gunk/crap/dirt off of him, he came out pretty clean and I wrapped him in Suzie's cooler to dry off while I uhm... cleaned his little mini sheath.  He was actually pretty good about it until I got to a spot where he had A LOT of build up. I mean... it was disgusting. It certainly was no bean, but it must've built up around his penis and collected there. I managed to get it out and got quite a bit more out after that until he started getting upset with me, so I stopped. Poor guy. Just looking at the picture makes me want to barf. Ew. Doesn't help that Roxy looked at me like, "CAN I EAT IT?!!!!" I finished off with washing and braiding Spud's tail.

Both ponies were turned out with fresh hay and plenty of water, so I guess they don't have too much to complain about. Although, I cannot wait until I can bathe both of them because oh my god, they are disgusting pigs. 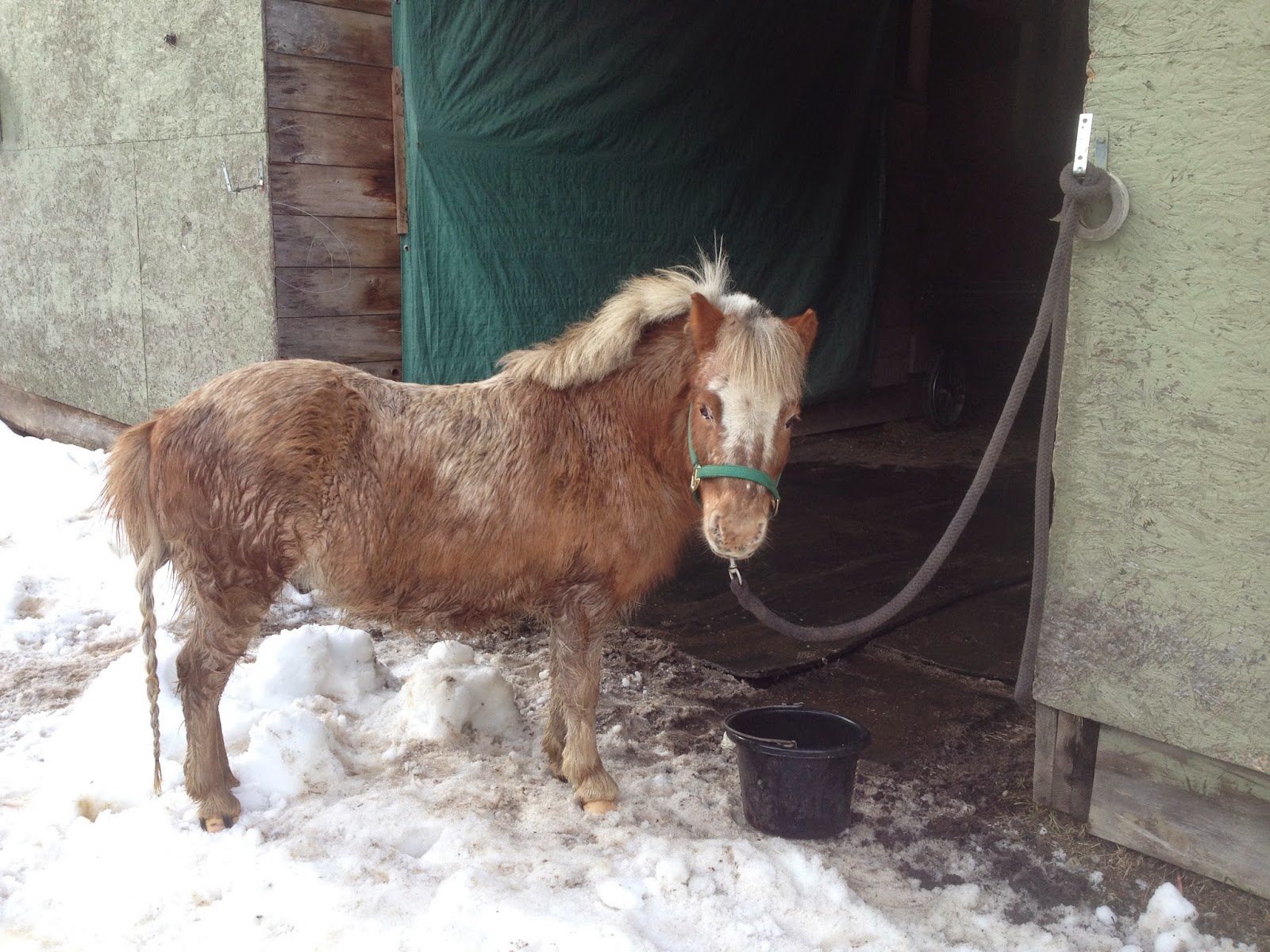 Email ThisBlogThis!Share to TwitterShare to FacebookShare to Pinterest
Labels: riding