Spud's First: Drive Away from Home

On to happier and better things.

Spud must've known I would need a pick me up on Saturday afternoon because he completely blew me away. When I pulled up to the Indoor - which is communal - I saw there were probably four other horse trailers already there. I felt a bit dismayed - because if you know anything about driving and miniatures, it's that minis and carts can turn big horses into huge wimps. Those things seperately can turn even the most well-schooled horse into a snivelling baby... combine the two and you have a recipe for disaster. So, I wasn't sure how the horses already in the arena would respond to a clanky cart or a "horse dog".

Once inside, out of the rain, there were probably four or five horses being schooled in the arena. All of them took turns gawking at Spud and a few were brave enough to sniff noses with him. One grey Arabian mare was off-put by him and offended with his existence - so I guess you can't have everything. When I drug his cart in behind me a bunch of the ladies oohed and awed and a few people who were about to leave hung around because they wanted to see "the cute mini pull the cart". It is safe to say that pretty much everyone who was at the arena fell in love with him - I heard a mixture of "look at his small his ears/feet/tail/nose" and a young girl pretty much attached herself to him while I tacked him up. 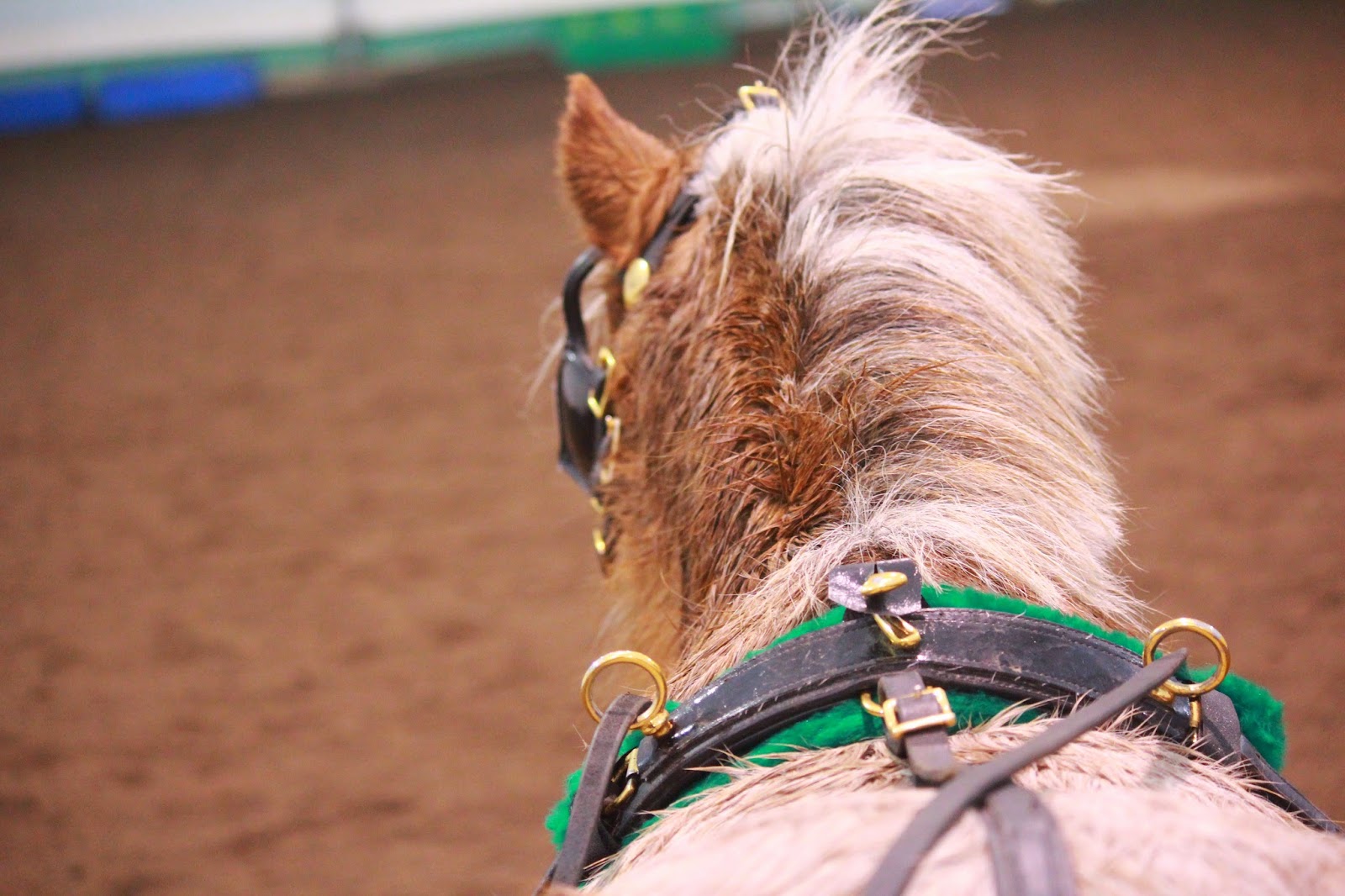 I was unsure how Spud would react to being in the indoor with all of the horses - some of which were being schooled over some "brush" and a few were loping circles and slinging dirt against the wall. He had never been in a busy arena like this before and I wanted to make his experience a good one. Additionally, a loose horse dragging a cart behind it in a arena full of other horses is just not cool, so we wanted to avoid that at all costs.

Once rigged up, I hand-drove him around the arena both directions at the walk and trot and he didn't put a hoof wrong. He went to work right away and wasn't bothered by the other horses cantering past him or the Arabian mare who literally lost her shit when we were trotting towards her. I hitched him up, donned a helmet and off we went. He was an absolute saint and I was so very, very proud of him. It took him a minute to figure out pulling the cart through the arena dirt, as it was a bit more resistance than he was used to (we normally drive on the paved roads). 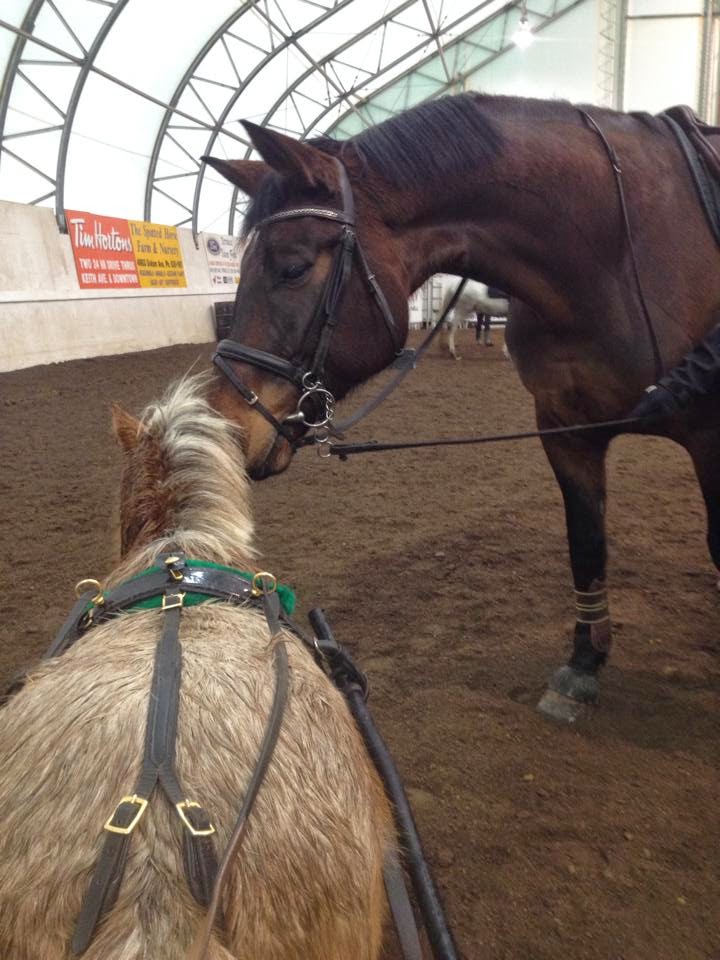 We did stop a few times to let him sniff noses with the other horses, meet a few of the riders, and just chill in the center of the arena. He did everything I asked of him and was super responsive in the bridle. He did put up a fight once or twice, but a quick correction was all it took and he was back on track again. A few of the girls took videos of him and whatnot to show their BFs and other rider friends, so I'm not sure I can get my hands on them. It was a lot of fun - we did serpentines, 20 meter circles, walk/trot transitions and he didn't get deep in the bridle at all. He took up a steady, quiet contact and went to work.


My friend waited to ride until most of the other riders had left, as the gelding she was riding had not been ridden in a while, and Spud and I hung out in the middle of the arena while she cantered around us. And as I was packing up to leave, Spud was whinnying at me while I put his cart in the trailer - completely adorable and hilarious all at the same time. 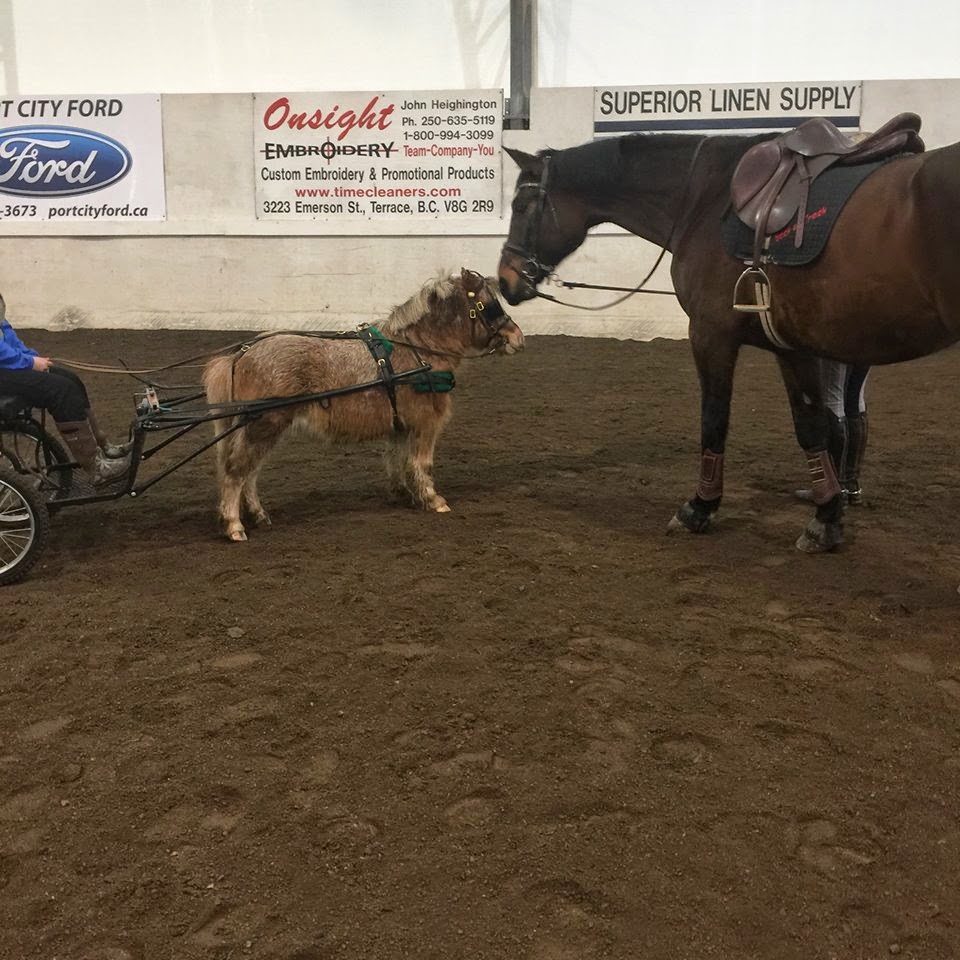 All in all, it was a super successful trip for Spud and I'm glad I still went to give him that level of exposure that he needs and will benefit him for years to come. He's only five and he's already this good - can you imagine what he'll be like at age 20? 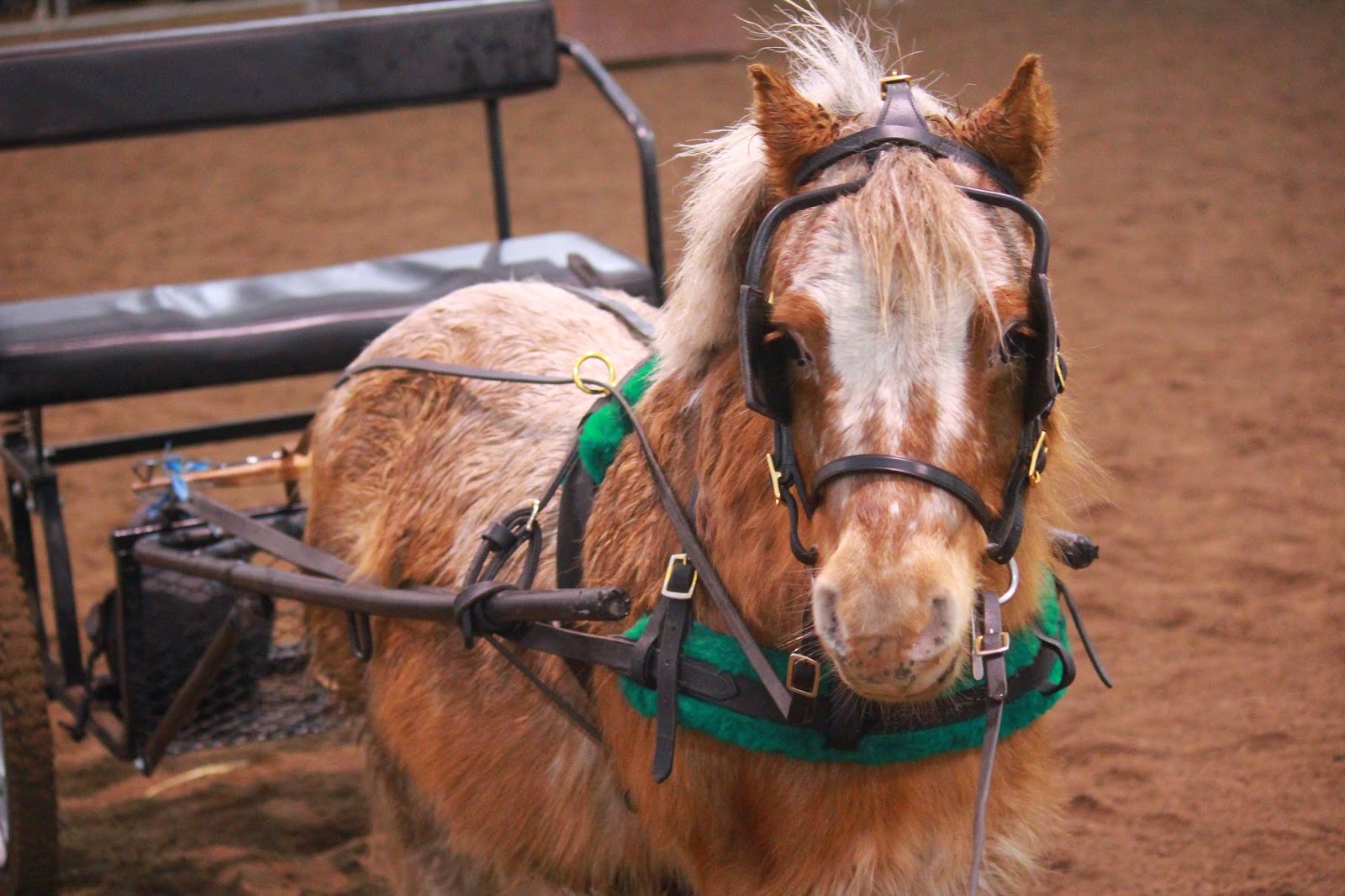 The drive home was pretty gross - still pouring rain and huge swells of water were all over the road. I opted to drive all the way home instead of stopping and unloading Spud because I had to pick up BF for him to back the trailer up to put it away. I had this hilarious idea that I'd pull Spud out of the trailer and walk him up to the front door, knock on the door, and tell BF that "Spud is here for his ride home!" but when I knocked, no one answered. I opened the door and called, "Hello?" No answer. I stepped inside and.... Spud came in with me!! He seemed pretty mellow about it and was looking at me like, "OK, where now?" So I did what any logical person would do - I closed the door behind him and my Brother, who was over helping BF with rennovations, ran to go get BF from the garage because "there was a horse in the house!" 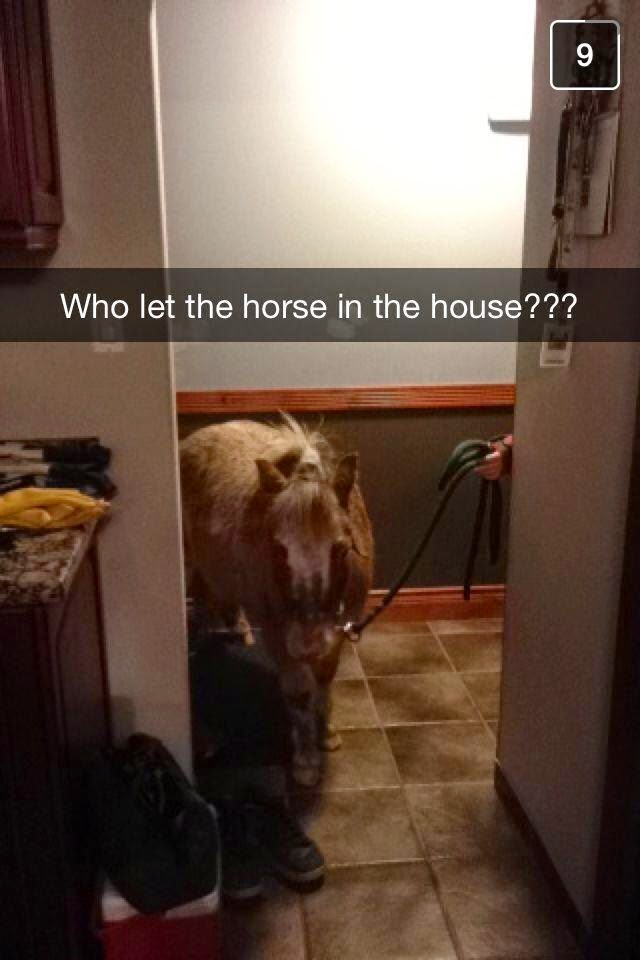 BF is a pretty good guy - he didn't get mad about having a stinky pony inside. He laughed and took pictures instead. After the hilarity of the situation evaporated, Spud was loaded back into the trailer and taken back to the barn, Suzie's fucked up shoe was pulled, and the trailer was returned. It was a bit of a shitty yet awesome day. Thank you Spud for being such a character and keeping me on my toes.
Posted by Cathryn at 4:22 PM