Yesterday I hooked up Spud for the first time, and as a beginner driver, I am certain I did a lot of things wrong. I took a few photos for the trainer to look at and assess and after doing more research and really sitting and studying the photos, I'm pretty embarrassed by them. But, this is a learning experience and like the 4-H motto states: "Learn to do by doing."

Firstly, I will share the photos, but please reserve any harsh judgement. I welcome any and all critiques, as this is what learning is all about. Mistakes are bound to be made, after all!

Please, enjoy our ghetto set up. 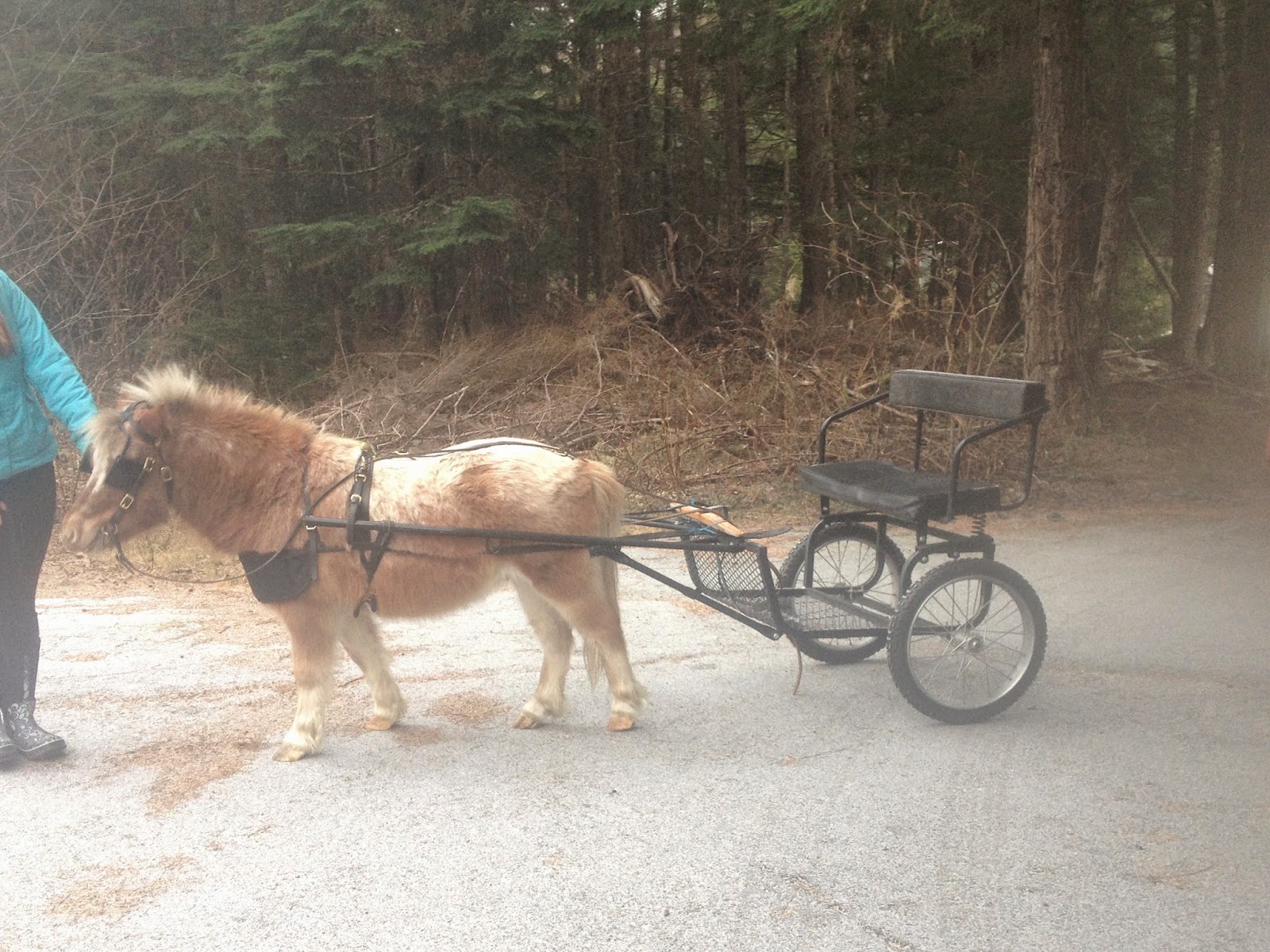 I blew up the photo as large as I possibly could, but you will have to excuse it's shitty quality, as my iPhone was in it's case and apparently the case was dirty/dusty.

Starting at his head:

Other than the lengthy list above, we are pretty golden, I'd say!

Now, I realize that Spud had two days full of lengthy traveling, as well as being thrown into some new digs with a new pony [Suzie], but I wasn't about to wait for my next days off (December 21) to drive him.

I started out by getting all his gear out and brushing him off. He seems a bit jumpy when you touch him on his hind-quarters, but after a brief moment of tension, he relaxes. He was good for having his harness put on and let me make all the necessary adjustments and he was ever so patient as I fitted, re-fitted and re-adjusted some more. He was calm and quiet as I hitched him up. A few fidgety moments, but nothing super malicious.

I took Spud out to the back portion where I sometimes ride, figuring that it would be less of a shock for him than driving out on the open road, but he had other ideas. I found it difficult to ground-drive him while walking beside the cart and ran into the cart not once, but twice, and it startled him a little bit. Admittedly, I gave up with ground driving and just climbed into the cart and this seemed to settle him a bit. He did try to take off trotting a few times and we felt pretty discombobulated as I tried to figure out what kind of pressure to put on the reins and how much was "too much" or "too little" for him. I had him halted at one point and he kept trying to walk forwards [much like Ms. Suzie whilst trail riding] but towards the end of our drive this naughtiness seemed to disappear. 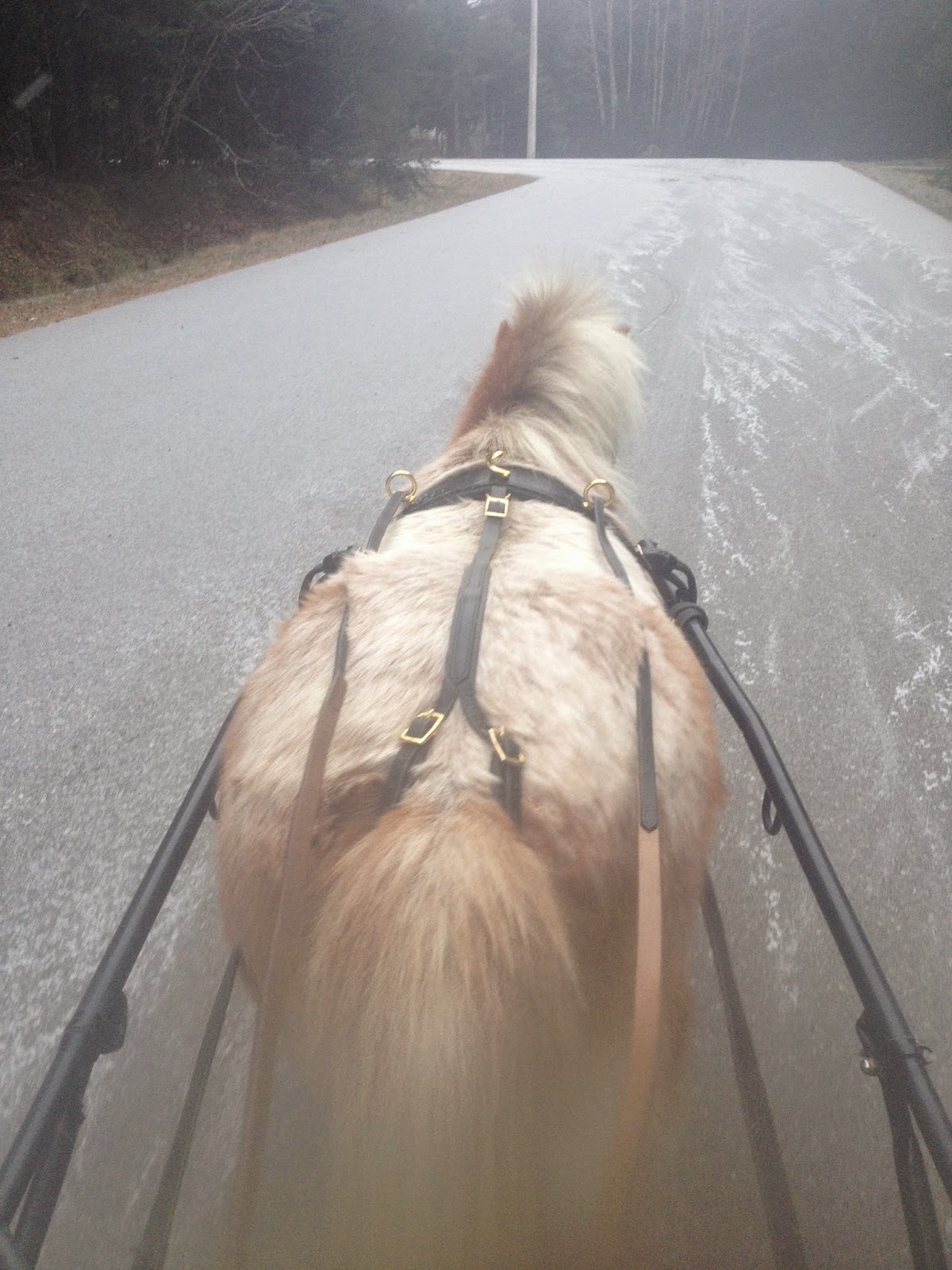 Since our drive in the backyard area wasn't going as smooth as I had initially hoped, I drove him out past the barn (where a neighing Suzie proclaimed her ever-lasting love), down the driveway, and out onto the road. My dog, Ty, quietly trotted along beside us and Spud never broke pace once. He was eager, ears twitching back and forth listening, and he chomped at the bit a few times. We made one pass around the street and had a few cars pass us, a dog fight break out behind us (a pack of four dogs came sprinting down a drive-way when they saw Spud and the cart and ended up getting a mouthful from Ty about "rushing" us), a few kids running across the roads, and it also started snowing. He was completely unphased by all of it. I even had him trotting down the road at one brief point and it took him a bit to find a good pace, and I found that when I sat deep in the cart he "came back" to me.

After our first pass around the street, a friend had stopped by to meet him. The two of us got into the cart and set off again. Spud didn't mind coming and going from the barn, or the fact that Suzie was calling for him. He was just as eager and as steady as last time. We trotted a bit more and he listened very well to voice commands; he really rounds himself out when he gets a good pace going. He does drift a bit, but it is very much a greenie thing. I've also found his "happy medium" and found that so long as I have some light contact, he is more than willing to take up the reins and plod along. More connection and roundness will come with more consistent schooling, but I could not be happier with him thus far! The stopping and standing got better as time went on and I was careful not to ask him to "walk-walk-stop-walk-stop-walk-walk-stop" like I did with Suzie before, and to be honest, the less I concentrated on having the perfect stop every time, the more I got out of him. I think him drilling things into his head is only going to piss him off - much like it did with Suzie.

Also, I hopped up onto Suzie and oh my, she is just a peach. At first, she was concerned with leaving her friend but happily went to work with one eye trained on the back pasture. We did some jogging and a bit of lope, but mostly just plodded along in the halter and Winter-blanket set-up since I didn't have my bridle out there. Afterwards, we just stood there as the snowflakes fell all around us and I laid on her back with my head on her bum. She let out a little sigh and stood rock-solid until I slid off and led her back to the barn and fed them.

Now, only 20 more days of work until two weeks off for Christmas.