In the last three days, Suzie has gone from being a normal, crotchety old mare, to being a destructive chewer of wood. I don’t know what has caused this drastic change, but she has started this nasty habit literally overnight.

At first, I didn’t think much of it, and assumed that she was nibbling the feedbox because she was bored or lonely since Tally had left. So when I found little pieces of chewed up wood on the bottom of the feed-box, I'd clean them out/ brush them away to keep her from inhaling them/ eating them. It has been a week today since Tally was taken back home, and at first, Suzie seemed to be fine. She hadn’t displayed any huge signs of being depressed or too frantic – she was still meandering around her paddock, still pooping normally, drinking/eating, and seemed in fine spirits. I felt bad that Tally had gone back home, but unfortunately, the lease had ended and Spud needed a second month of training.

However, now she has become downright destructive. She has been maliciously attacking the plywood that runs along the one side of the lean-to and pulled off a large piece of it this morning. I haven’t had the chance to observe this behavior, as I am certain it only occurs when she is on her own. It has been puzzling me, and has made me rightfully frantic because A) what the HECK is going on with my horse?! and B) what if she inhales/eats the wood and chokes? 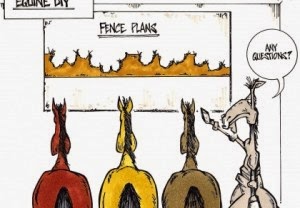 A friend had immediately said, "Maybe she's turned into a cribber now". But I hesitate to call it cribbing, because it isn't on fence-posts and it doesn't seem to scream "cribbing" to me. It just seems... frantic and a bit more malicious than cribbing... I don't know. Maybe I'm just unwilling to admit she is a cribber.

Factors to consider in all of this are the following:

1. Tally has been gone for one week today.

2. Suzie’s salt lick ran out about 4-5 days ago and I hadn’t had a chance to replace it yet, as the only place that sells salt licks is 45min away and closes before I finish work (conveniently!).

3. It has been absolutely POURING rain relentlessly. The last two days have had severe rainfall warnings (yesterday 75-100mm of rain anticipated, and today a 50-75mm rainfall anticipated), so Suzie is certainly NOT out grazing on the little grass sprouts or wandering around.

I hope to have this re-mediated quite quickly. She has also started to move her feed-box around and this morning, when I found it turned right around and the piece of plywood ripped off, I grabbed some lead-ropes and tied the feed-box to a hanging hook for the haynet. I can only hope there isn’t mass destruction out there today. I had my brother run out and get Suz a salt lick, as apparently wood eating can be due to mineral deficiencies.

I seriously hope this gets fixed… and fast, otherwise I may have to borrow a friend’s horse for the next 44 days until Spud arrives. This is very much unlike her, though. When Tally and I left for the BVX Competition in August and Tally was gone for almost a week, it didn’t phase Suzie. She wasn’t destructive. She didn’t even really care.

Sigh, my brain is going a mile a minute on this... Any thoughts/ suggestions/ hugs?  I'm kind of at a loss.... but my game plan is to start with the salt-lick and remove her feed box to see what happens. My poor mare.
Posted by Cathryn at 3:20 PM