Saturday was English classes at the show and I got there about half an hour early. Show management had the walk/trot classes running first and A LOT of people were in them so I didn't even have a class until nearly 10:30am. With the amount of people showing (which was LOTS), it was a whole heck of a lot of "hurry up and wait".


Tally warmed up okay... She felt ouchy on her feet, probably from walking over the rocks the last two days trail riding (I don't think our extra long trail ride the day before helped any!). She felt much better in the arena, thankfully, so I didn't need to be too alarmed about it. Despite all the trail riding and riding I did before the show, Tally still felt ridiculously fresh and forward. I think that is just the kind of mare she is... she is really starting to remind me of Andrea's mare O-Ren at The Reeling. She just is a powerhouse that can go, go, go!


In all of the flat classes we didn't place at all. Mostly because Tally preferred to be strung out and I just did not have enough leg behind me to push her into the bridle (I was really wishing that I had worn spurs!) and it possibly could have been due to the fact that the judge was a Western judge. Some of the other classes placings were a bit wonky for English, but you win some, you lose some. One of our Hack classes, however, felt AWESOME. We just powered along at the extended trot and she really felt good. However, our halt and back ups were awful, as per usual because Tally hates slowing down and stopping. She'll pig root her neck out and yank you out of your seat no matter how hard you push her into the bridle and attempt to balance her.

The end result is, "Fuck you, little human." And when I retaliated and gave her a good boot in the middle of one of our classes for yanking down on me yet again, she fired back by giving a snort and a half-hearted rear... just as the judge looked directly at us. Shit.

Because there was such a large break between Flat and Jumping, I opted to do the speed events and had a lot of fun, even if I am not a gymkhana pro. Tally loved ripping around and really threw herself into fifth gear on the home stretches. We didn't place against any of the regular gymkhana people, but we still had fun, which is what counts. 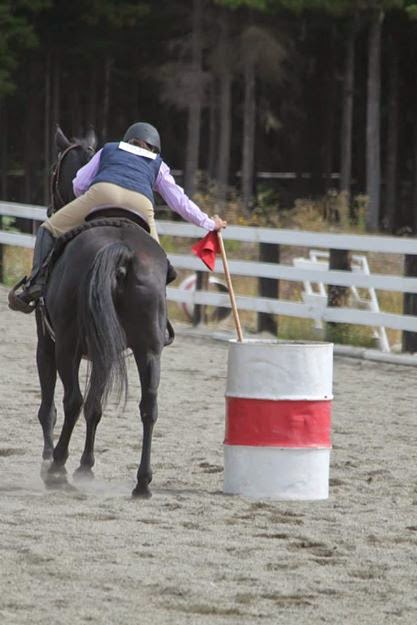 And if I thought that the Flat classes and Speed Events would slow her down, I was wrong. Jumping came around and Tally saw the jump and went ballistic with enthusiasm. She tore down the line to the practice jump and took off gleefully cantering. She was quite pleased with herself. Our first x-rail class went well, I was really happy with her pace, but it just wasn't Hunter-y and we did not place. Our last two classes (2' and 2'3" respectively) were complete shit to say the least. It seemed as though the higher the heights went, the faster and flatter she dove into it. In our 2'3" class I guess we were the giggling stock of the holding ring because Tally deer leapt over every fence and popped me out of the tack more than once.


To say the least, it was a disaster. I was a bit embarrassed, but at the same time, I stayed on.... which is what counts, right?

We didn't win any ribbons, and Tally sure served me a slice of Humble Pie. She is teaching me a lot, though, and I am definitely learning my strengths (and weaknesses) with her. A lot of it is MY fault because I don't get after her for it - I just think "Oh, okay she doesn't want to stop, so I'll just sit here and look pretty." Time to put on the big girl panties and deal with it!
Posted by Cathryn at 1:26 PM