I have been holding off on posting this, for fear of retaliation and a mass of "naysayers" overwhelming my blog, but I've come to the realization that this blog is mine. Whatever opinions I express may not be the vast majority or be equally appreciated, but it is my own. This blog is a representation of my trials and tribulations as a novice horse owner - someone who becoming shaped and molded with the sport. Difference of opinions are okay, and going inadvertently against the grain of "mainstream" equestrianism could be a gulping breath of fresh air.

So let's keep the pitchforks down and the flaming torches to a minimum, okay?

When I sent Spud to the trainer (who is 14 hours away from me, but was only a short 45min from Spud), I wasn't completely certain how she trained. I knew she was successful at what she did, and that she has an extensive training record along British Columbia and into the States. However, to be brutally and completely honest: I have never met Spud's Driving Trainer.

I can almost feel every professional horse person shuddering at the thought of sending their horse to someone they have never met. Trust me, it caused a lot of mental turmoil within me.

Two of the worst possible things anyone can do in the horse industry. Two things that are so frowned upon, I've had people literally raise an eyebrow when I mention I own a miniature and no, I haven't met him yet.

BUT, before I even thought about sending him to the Trainer, I verified my legitimate concerns and expectations. I was never once berated or treated any less because the situation, in all truth, made me a bit edgy. An open line of communication has been established and I honestly couldn't be happier.

So why haven't I shared my joy? Why haven't I uploaded any of the several videos I've been sent?


Simply because, this trainer is not "by the books". She does things her own way (without harm or abuse, of course!) and I feel as though a lot of strict equestrians would look down on her and her program. However, I've begun to feel somewhat exasperated at constantly censoring myself, so I've decided to say "To hell with judgement" and share my experience with Spud, regardless of it being "the norm" or not.

Trainer drives Spud out in the open. He is exposed to loose dogs, kids running around and playing, horses in the background neighing and trotting around in their pens,  barn doors swinging open and closed, etc. He's been driven down narrow(er) aisleways, in a sandy arena, through mud puddles, around trucks/trailers/etc.


I prefer it that way. It is going to prepare him for the real world. I realize he is green in the cart, but I honestly wouldn't have it any other way. Chaos is a normal thing for a riding/driving horse, and to baby him would not do him any favors. Of course, if he was at all nervous in the cart or otherwise, Trainer would not be driving him in the open like she is in the photos (also, please no mention on the lack of helmet... I have no control over that, thanks!).

So perhaps the "normal" way of training a horse includes a rectangular-fenced piece of dirt, but it doesn't fit into my world and it certainly will not give me a well-rounded driving horse. I want him to be able to face any kind of situation with a head-on personality and be able to be calm, collective and quiet in the event of something truly horrific happening. Safety is of paramount importance, which may sound ironic considering the chaotic environment he's being trained in, but everything that can be controlled in these situations is controlled. I want him exposed to walking over bridges, over tarps, through water, in the rain/snow, etc. 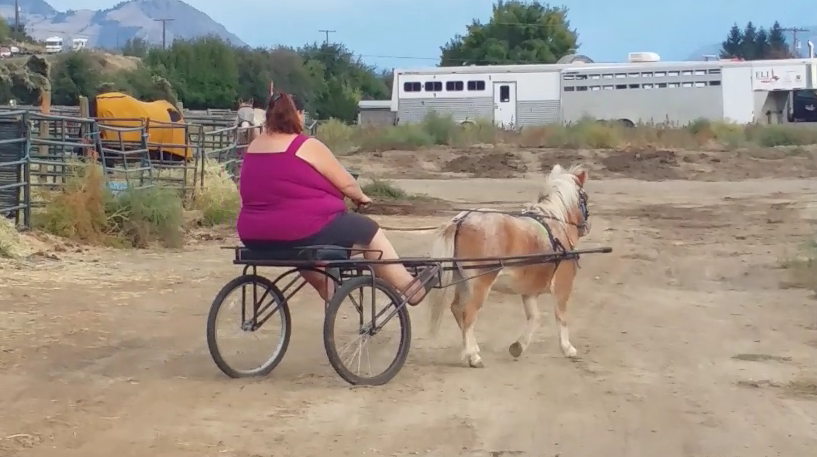 I want to shock his world.

And so far? Spud could literally give two shits. The worst thing he does is he tries to speed up and gets cranky when he is corrected. His only hindrance is his greenness, which is easily fixed through miles and wet saddle pads (or, harnesses, rather!).

On Tuesday I will be meeting Spud, and his Trainer for the first time. He will still continue his training until the end of October and by that time, we should have a pretty clear cut idea of where he stands. It'll be a long road, but in the end, it'll be worth it. My horses and I; social outcasts of "normal" equestrianism.