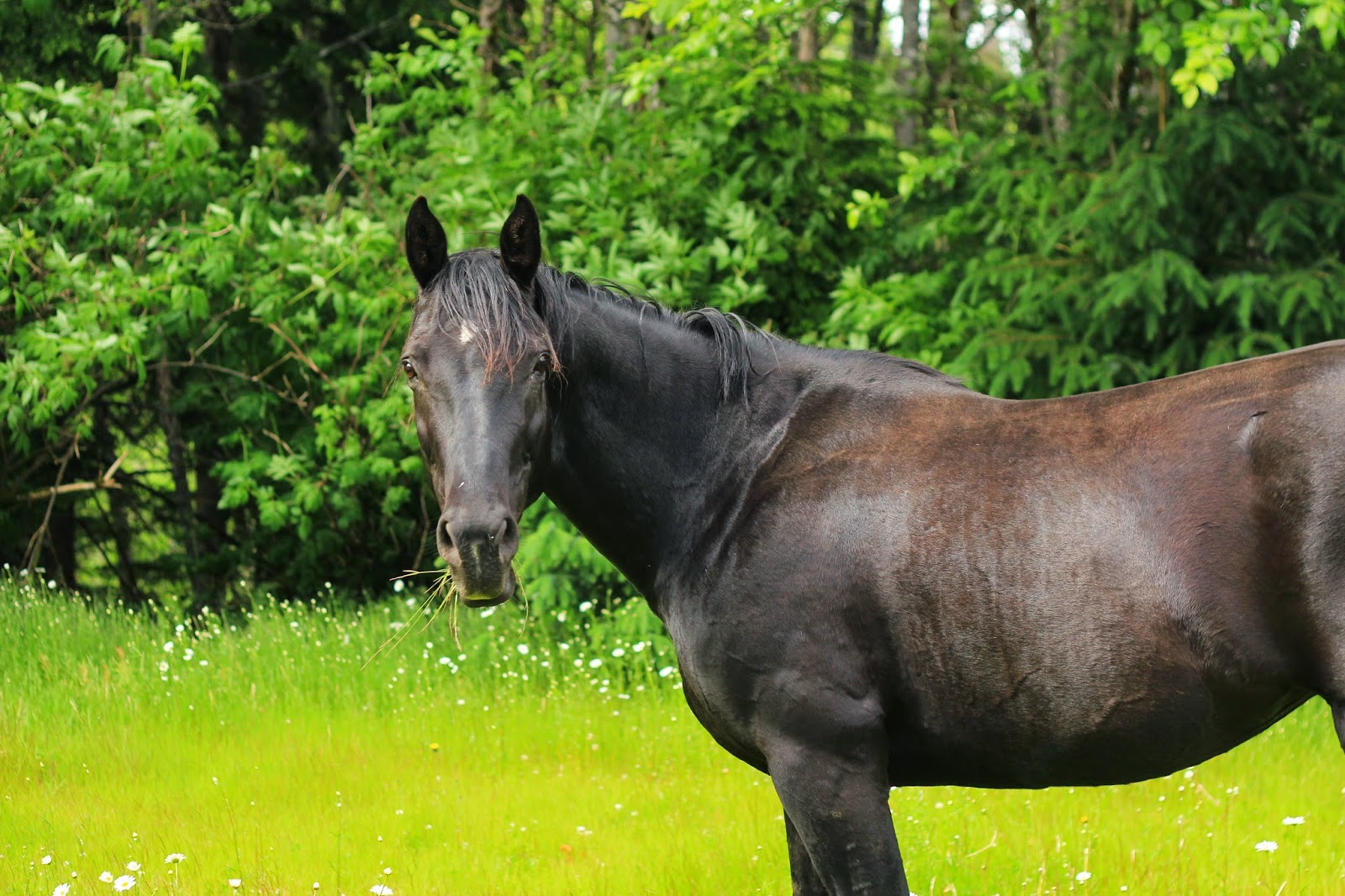 Tally came up on Sunday afternoon, and she settled in without so much as a snort or shake of her head. The meeting between Suzie and Tally was pretty much more or less civil, and other than a squeal and pin of the ears, there wasn't much else that occured. I, for one, love the no muss no fuss horses instead of the ones who have to zoom around the pasture like racecars.


Sunday night I opted to just do a bit of ground work and loosely lunge Tally and ride her around at the walk and trot. She was quiet, willing and responsive. She does have some kind of beef with her right ear - she hates it when you touch it, which makes bridling a bit interesting. However, I've been working with her on it and taking my time and she's gotten much better with it. I didn't really mess around with her too much though, as I wanted her to settle in and take time to adjust to her new surroundings. She hadn't been ridden in the last year, so I didn't want to push her. 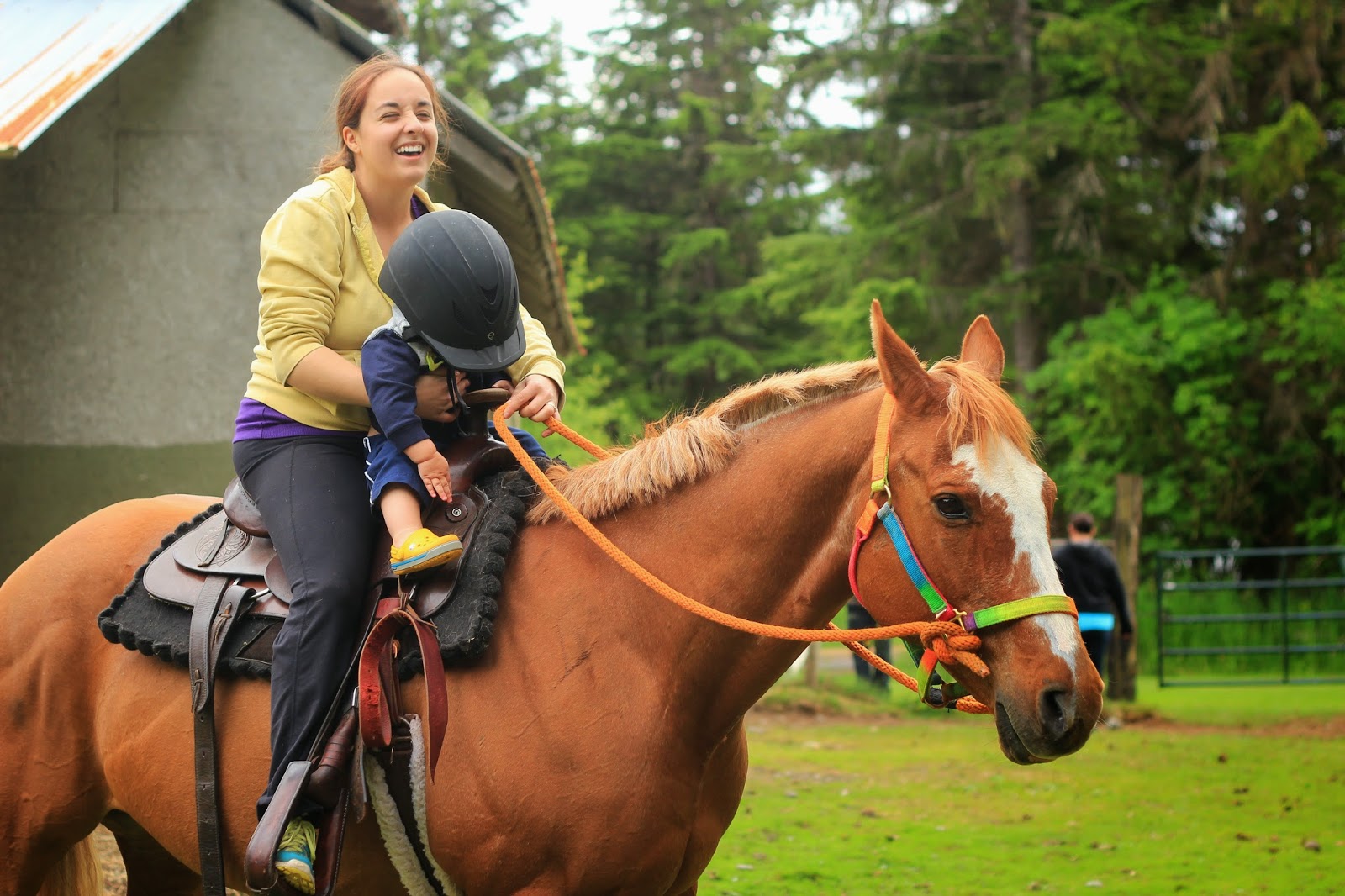 My little year old nephew popped up onto Suzie with me as I rode her around in a halter, and he just LOVED it. My helmet was wayyyy too big for his little noggin, and I had to more or less hold the visor up so he could actually see where he was going! But, he clucked at Suzie and would lift his little legs up and "kick" her. It was seriously the cutest thing ever. I think Suzie prefers little kids - she doesn't seem to like when any of my friends ride her... 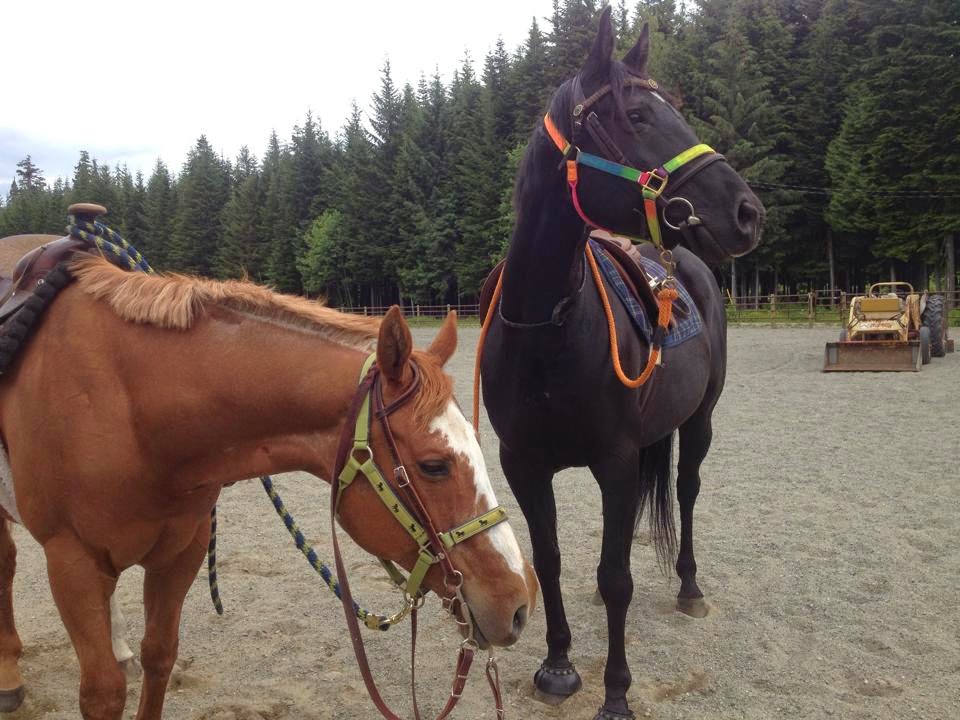 Monday afternoon I headed out and ponied Tally behind Suzie to the fairgrounds (the tractor broke down in the arena and since has been moved out) and rode both mares. Both were great on the trail ride there and they seem to really like eachother now. Tally was quite... erm... forward. She doesn't have much in the way of brakes and sometimes I felt like my arms were going to fall off, but I had a feeling it was to be expected considering her lack of consistant riding. Irregardless, she was SANE. She didn't pull any dirty tricks or being nasty - she was just very forward. She chomped on her bit like a maniac and shook her head when I half-halted, but other than that, she was sane. We did a bit of walk, trot and canter and she was completely safe... a bit fast, but otherwise safe.

Suzie was awesome in her jogging and loping - OH MY GOODNESS I was SO proud of her! We had some lovely transitions and just... overall NICE work ethic. I was definetly very surprised with her - we had a very NICE jog, one that I wouldn't mind to see in the show pen. VERY lovely. I just gushed all over her when we got home.


Tuesday I went out and did some light schooling in the back pasture on Tally - I wanted to start seperating them from one another. Tally was perfect - she didn't care that Suzie was neighing and carrying on. We had some nice moments in the canter but I didn't really push for much considering I just wanted a nice, quiet schooling. After our nice moments, we had a maiden voyage trekk out into the world! We did a nice little hack around the block sans Suzie (who screamed and carried on while we left) just so I could test to see how "beginner" friendly she'd be for Hubs. She was ACE. Buckle rein the entire way and ears pricked forward in interest. She only spooked once at a dog and tip toed past a garage where a guy was playing the drums very loudly, but otherwise, again, was safe and sane.

I opted to take Suzie out on a little trail ride around the block as well and she was more of a pisshead - just being antsy to get back home and being stubborn. I worked her little butt off and after that, she seemed to settle more. I did have to have a come to Jesus meeting with her on the ground, but other than that incident, she was perfect as pie! 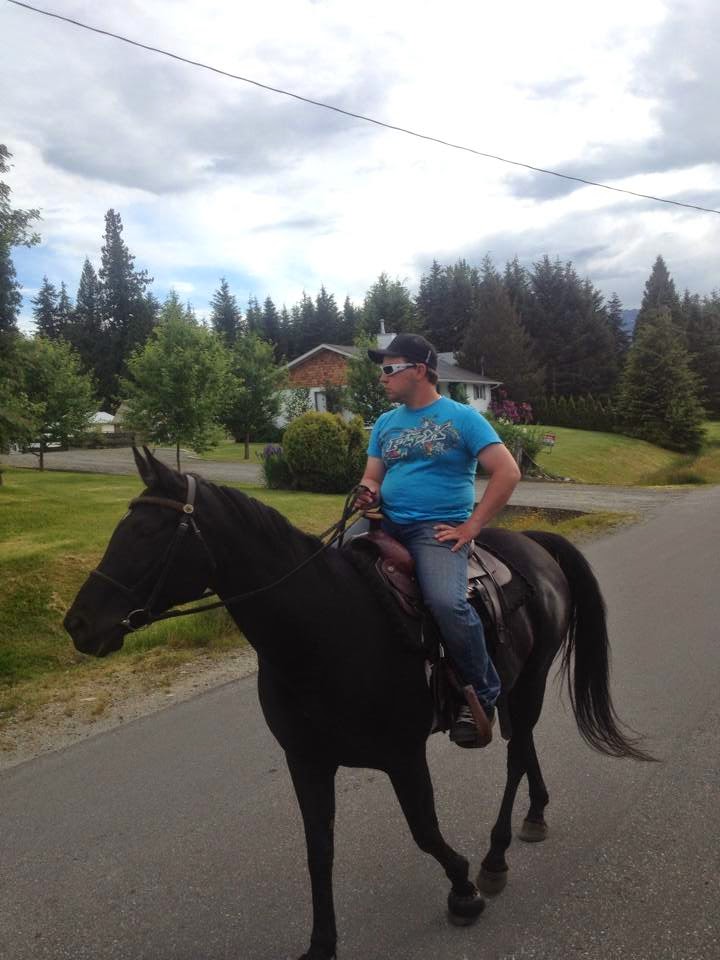 Wednesday evening the SO and I went out and rode. Hubs wanted to ride Tally, but was a bit unsure of her. In the end, he totally LOVED her. Tally was steady, safe and sane for him - stopped when he asked her to and he even - gasp - trotted her!!! We messed around in the arena a bit where I rode both Tally and Suzie and switched the saddles around a bunch of times so the Hubs could ride in the Western saddle. Hubs said he likes Tally more because she listens better! Ha ha ha! I think Suzie is just too sensitive of a ride for him and she responds quicker than Tally does.


Today, both girls are going to be getting the day off. I've been riding both of them quite consistantly and /I/ certanily need a day off!! I'm quite pleased with the progress both mares have been making - Suzie is laying down some awesome lope departures and her jog is just so smooth and steppy. And Tally is just exceeding my expectations - no buck, no bolt, no fuss - she is a bit wiggly, uncoordinated and reallllly out of shape, but she is trying!