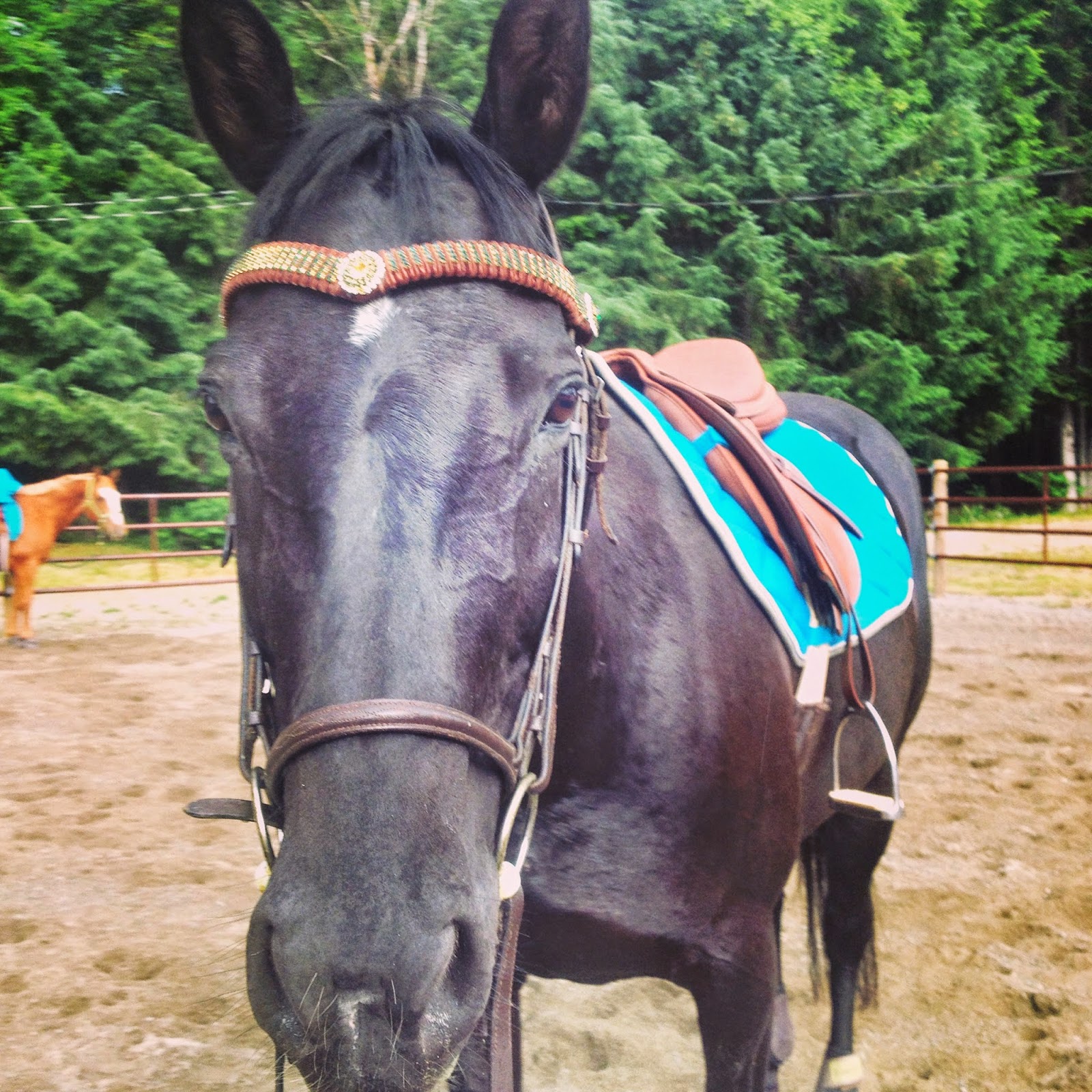 Yesterday I was determined to ride. Despite the recent influx of rain-sun-cloud-sun-rain-sun-rain we've been getting, I was determined to get out and ride Tally, at the very least. I had initially planned a jump schooling on Friday night, but that idea was nixed since it was pouring rain and today after work, there just wasn't enough time to set up the jumps. Additionally, a friend of mine was supposed to have a lesson on Suz, but she cancelled about half an hour before and I was already on my way to the fairgrounds, ponying Tally behind Suzie.

I opted to ride Tally first and put in a semi-decent school on her. We worked a lot at the trot - and I remembered to actually sit UP, roll the shoulders back and be an effective rider. To be honest, I didn't necessarily worry about her too much, as I was more or less concentrating on myself. We did have some nice moments of connection and some not so nice moments of... miscommunication.

Her trot work is coming along nicely, and her canter is still oh so discombobulated. She is very unbalanced and has a very difficult time bending around corners in the canter. I find that I have to use A LOT of inside leg with her and just help support her with my outside aids. We will figure it out. She is very out of shape and a lot of the exercises, despite being quite simple in reality, are difficult for her to maneuver.

We did do some mild jumping - about 2' or so.  I surprised myself that I even wanted to start out jumping that height, but man, once this mare is locked onto a fence, she is LOCKED. It's like a bomb could go off behind her and she'd still be attuned to the fence. Since she has such a rock-star game face, I actually (for once!) wasn't even nervous to jump her! She comes out of the jump in this light, uphill and quiet canter (which she didn't want to come back down from!); her work attitude is just awesome. We mostly did trot in - canter out exercises and I attempted to canter in twice, but her canter is so awkward and un-unified that I had a hard time negotiating to the fence. 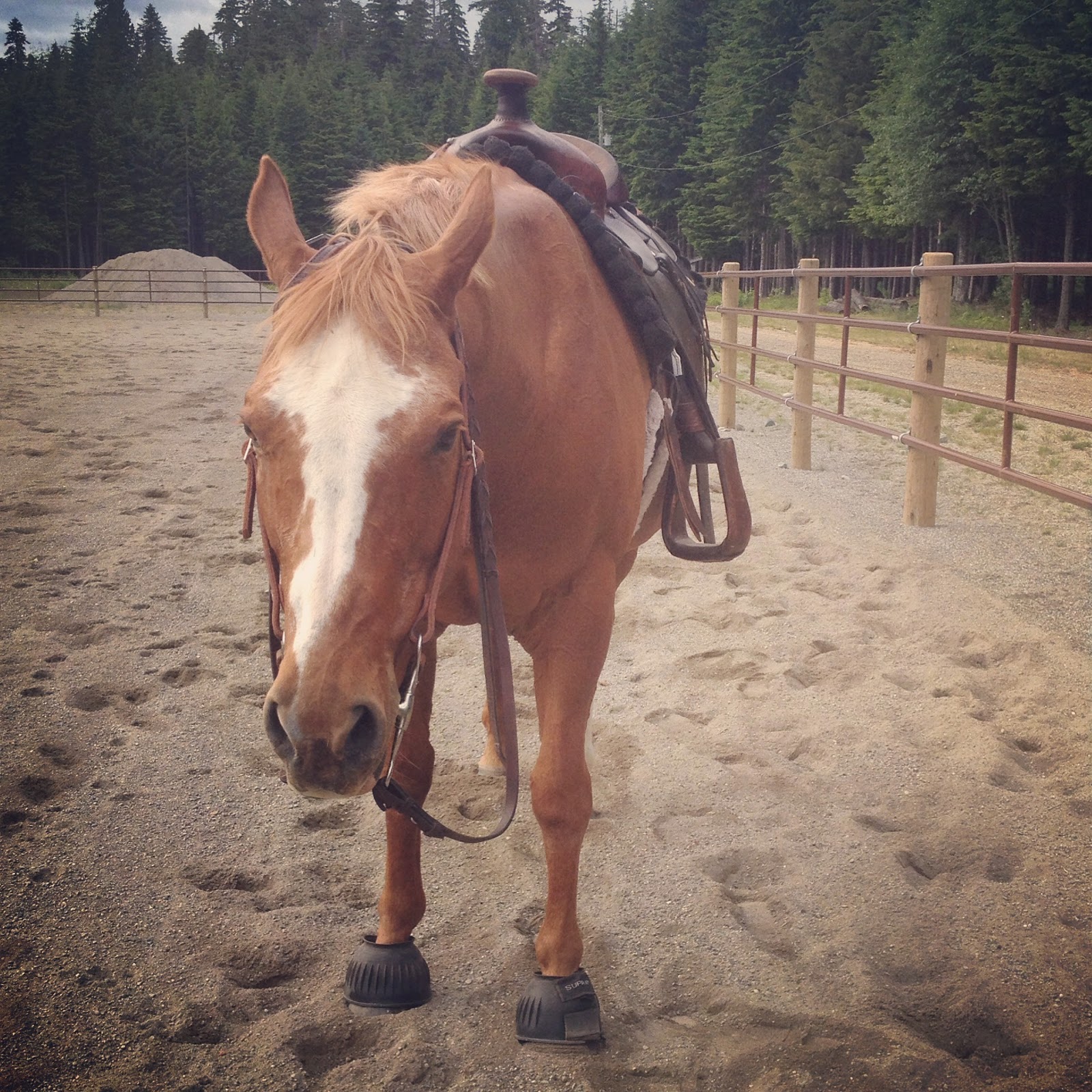 After cooling out Tally, I popped up onto Suzie. We put in a mild ride, considering she just had her the last eight days off. She was totally ramped up; as soon as leg pressure was put on she would just shoot forward. So we did a lot of walk/jog and practiced riding squares - which is a lot harder than you'd think! I had to get her little Quarter Horse brain thinking, so we rode a very interesting set of square turns which actually had her moving off the leg much better.

I also attempted to ride one-handed and oh my lanta, why is it so HARD?! I had a lot of trouble regulating her speed, partly because I couldn't give her an appropriate back up with the reins when I half-halted, and partly because she was game to just GO GO GO.

We did some lope sets; mostly circles to get her to bend and practiced a lot of her moving off of my leg aids rather than my hands because when I ride one-handed I'm apparently a retarded baboon who can't cue my horse to neck rein properly. She was great though - once I had her attention and got after her for little mistakes (not slowing down/stopping when asked, trying to break into trot when leg pressure was put on) she had her A game back on. We has some realllly nice moments one-handed with her just jogging along quietly.

We ran through an impromptu reining pattern twice and she was good. It was pretty rough around the edges, but considering I was attempting to one-hand it and still be somewhat of an effective rider, I think it went alright.
Posted by Cathryn at 10:33 AM