Due to my hectic work schedule and the hours I work, I visit and feed once a day. It isn't ideal, but Suzie has grass to mow down during the day and in the evenings she gets fed. However, that is going to change. I've begun talking to the Land Owner and asked if she wouldn't mind feeding in the mornings for me, because it literally is, impossible for me to get out there in the mornings. Although, I do not think the problem stems from lack of food on Suzie's part.


Saturday evening I went out to meet the chiropractor and as I went to the pasture to grab Suz, I noticed she was nowhere in sight. I literally started panicking until I saw the destroyed fence - it is a sliding rail fence, much like the one pictured above. However, there are two rails and one is about 5 feet in the air and the other is about 3 feet (so, chest height on Suzie). Some of the boards were there previously and were obviously rotten, but I didn't think Suzie would be as bold as to lean onto the fence and break it. Well, she did.

I lead her back into the pasture and we did our Chiro work - the Chiro was very impressed with Suzie and how she looked "sore wise". She re-adjusted her trouble knee again and worked slightly on her shoulder to put it back into place. After Stephanie the Chiro left, I fixed the fence and chased Suzie around a little bit and she bucked and carried on like a little three year old. It was too cute to see. Suz ended up drinking some water while I was there so I dumped some Gatorade in there - she didn't seem to mind.

Lastnight I went out with the SO, a bit later than normal, and we found Suzie in the back pasture AGAIN. She more purposely broke the fence boards again - it definitely looked like she pushed and nudged the one fence until one side came loose and fell out and then ducked under the top rail and broke it while trying to get over. All the while we were fixing it, mare-face watched us from afar and had a certain mischievous look over her face that said, "Bring it on, human."

We reinforced the fence with two top rails, two bottom rails and made an "X" and tied it all together haphazardly with binder twine. I scooted out of work to check on her just before noon and this is how I found her: 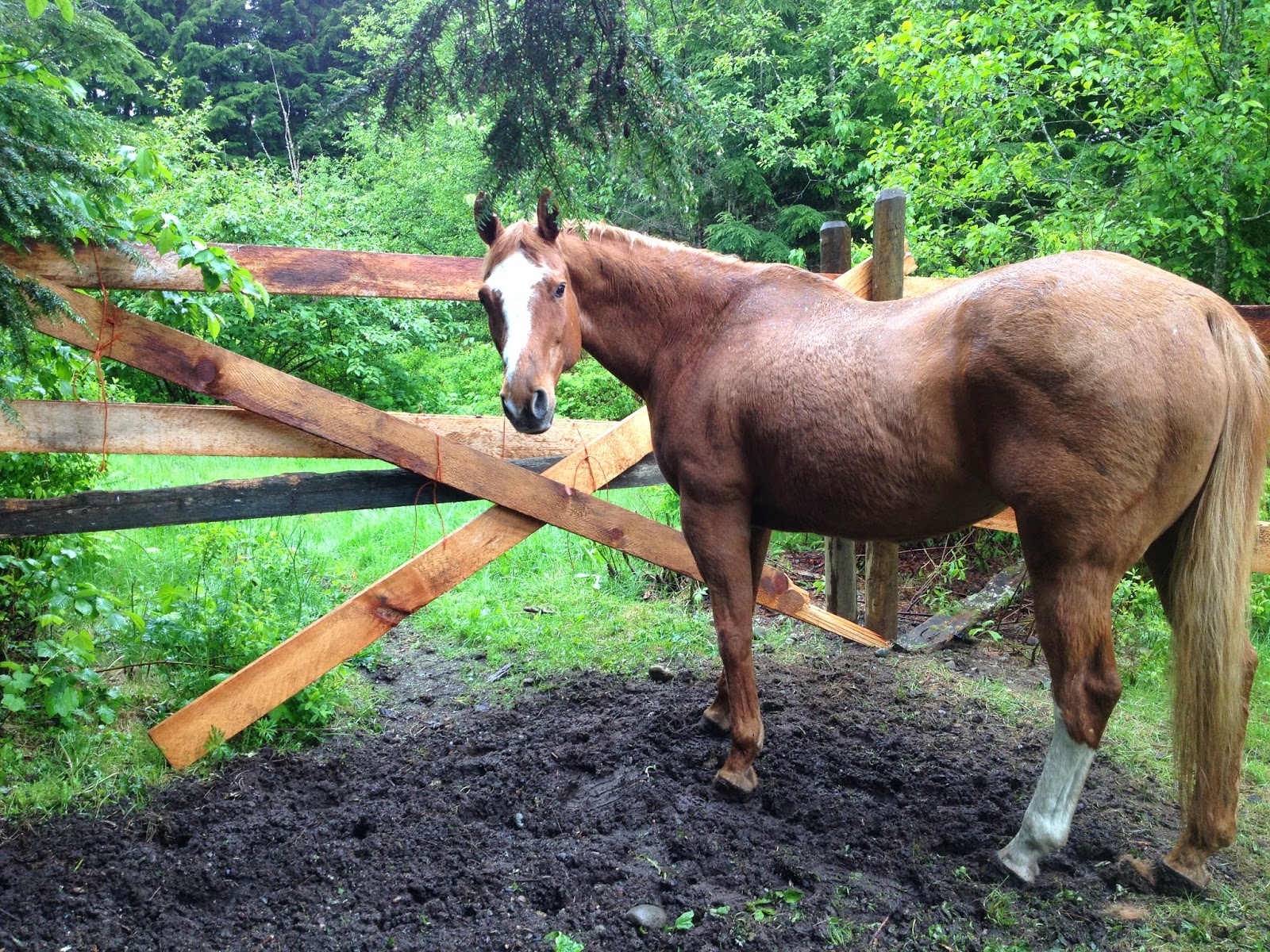 If that doesn't say "Fuck you" I don't know what does.

It looks like a mess, but it works. The back "pasture" she is trying to access is actually not a pasture, but rather, the LO's (Land Owner) backyard and it is minimally fenced. There are large trees and thick bushes lining along the backyard, but no real "fence" or barrier. IF Suz really wanted to, she could easily access the street and road, which, I do not want. She is a pretty smart horse and would rather sit and eat grass all day than play along the road, but I don't want to take any chances.

She's already mowed down her pasture, or most of it, and I'm debating blocking off the second portion of it to let it grow back. The pasture in the back still needs some fencing and we aren't too concerned about it, because the LO had already promised that prime grazing to someone else. As per the map of the layout, you can see that the yellow is where Suzie currently is - where that red "X" appears is where I want to cut off the pasture and let it grow. The pink is the secondary pasture where the other horses will go, come Summer time. And the blue... well... that is where Suzie enjoys pigging out after she breaks fences.

Fingers crossed when I go check her this PM that she didn't get up to too much trouble.
Posted by Cathryn at 4:00 PM