And went out and rode my mare!
Truth be told, I wasn't necessarily keen on riding, considering it was a very cold -18 with the wind. But, I loaded up the mutts, went and picked up my tack and dressed like I was about to camp overnight outside.

Suzie was waiting in her little turn-out section and was happily munching on some left-over hay from her morning's feeding. She looked over at me quietly and I led her out to my car and whipped off her winter blanket and began tacking her up. She wasn't too keen on standing quietly for the first 5 minutes or so, but didn't really put a foot wrong, persay. She just shifted around, careening her head to get a glance of her friends who were calling like lunatics in the barn behind us. I kind of had to giggle, because oh lordy, the cinch she wore at the end of the summer is SO big now. Thank god she lost most of that weight. 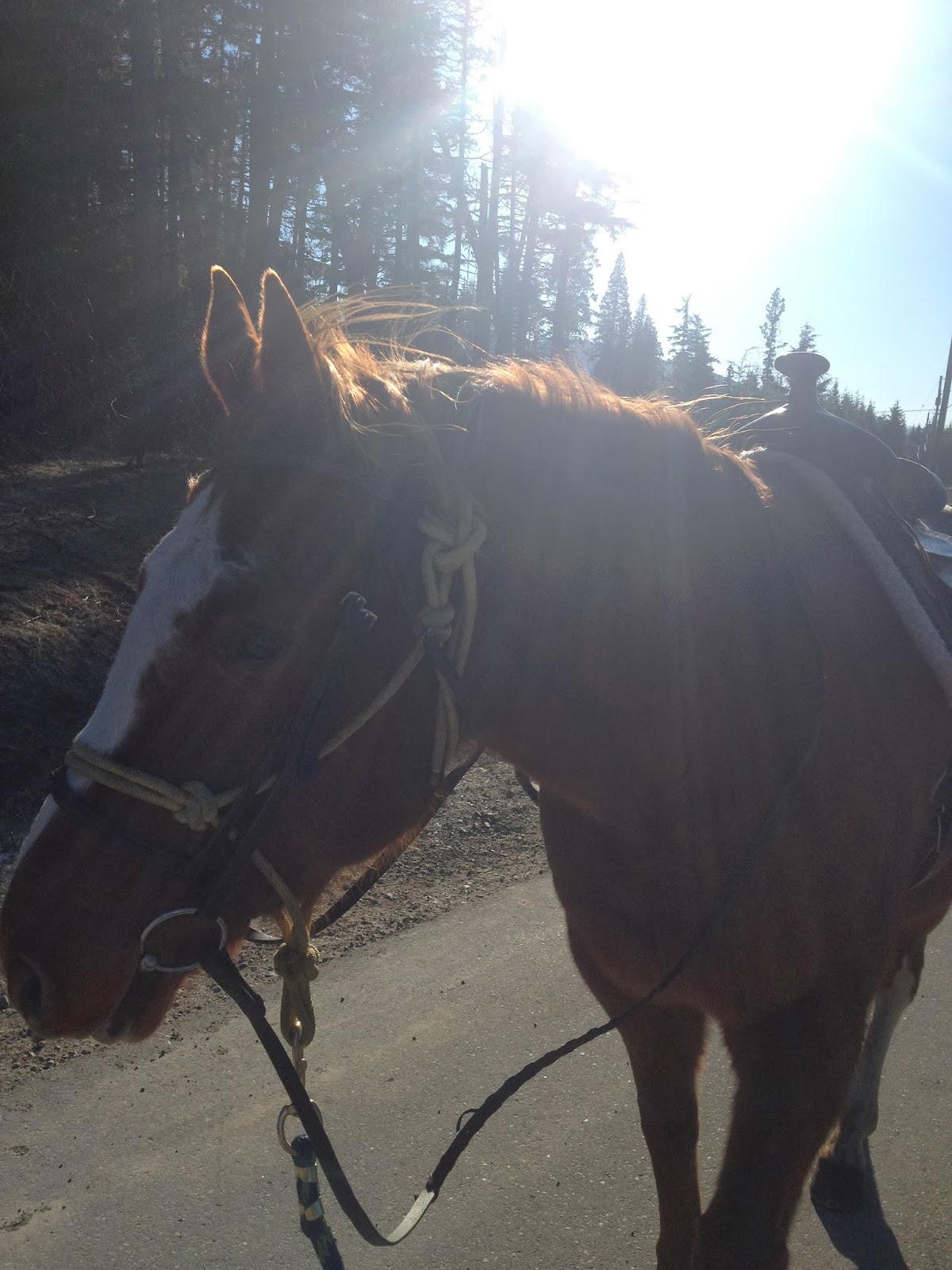 I let the dogs out and hand-walked (to keep an eye on the dogs) until we got to the dirt road. Suz kept up at a gingerly walk and seemed quite pleased to be out, despite the wind whipping around and freezing our my ears, nose and toes. I had begun to feel as if a trail ride were possibly a bad idea, but  I had already come this far, so I might as well commit!

I stopped Suz a little ways down the dirt road and went to mount up. She was a bit wiggly, not wanting to stand still and trying to turn around to go home. I ended up putting my foot in the stirrup and hanging over her saddle like deadweight until she quit dancing around. I re-mounted and she stood much better and we set off quietly. It took her about five minutes to stop acting like a witch and after that, she walked along on a loose buckle rein the entire ride. It was heavenly! I had initially planned to incorporate some jogging into our session, but as I did, she didn't seem very comfortable. I have a strong suspicion that:
A) She is out of shape and stiff from being out of work and the sub zero temperatures.
B) The ground is ROCK HARD. It's like running on pavement. NOT comfortable.

C) She is in need of chiropractic work again. 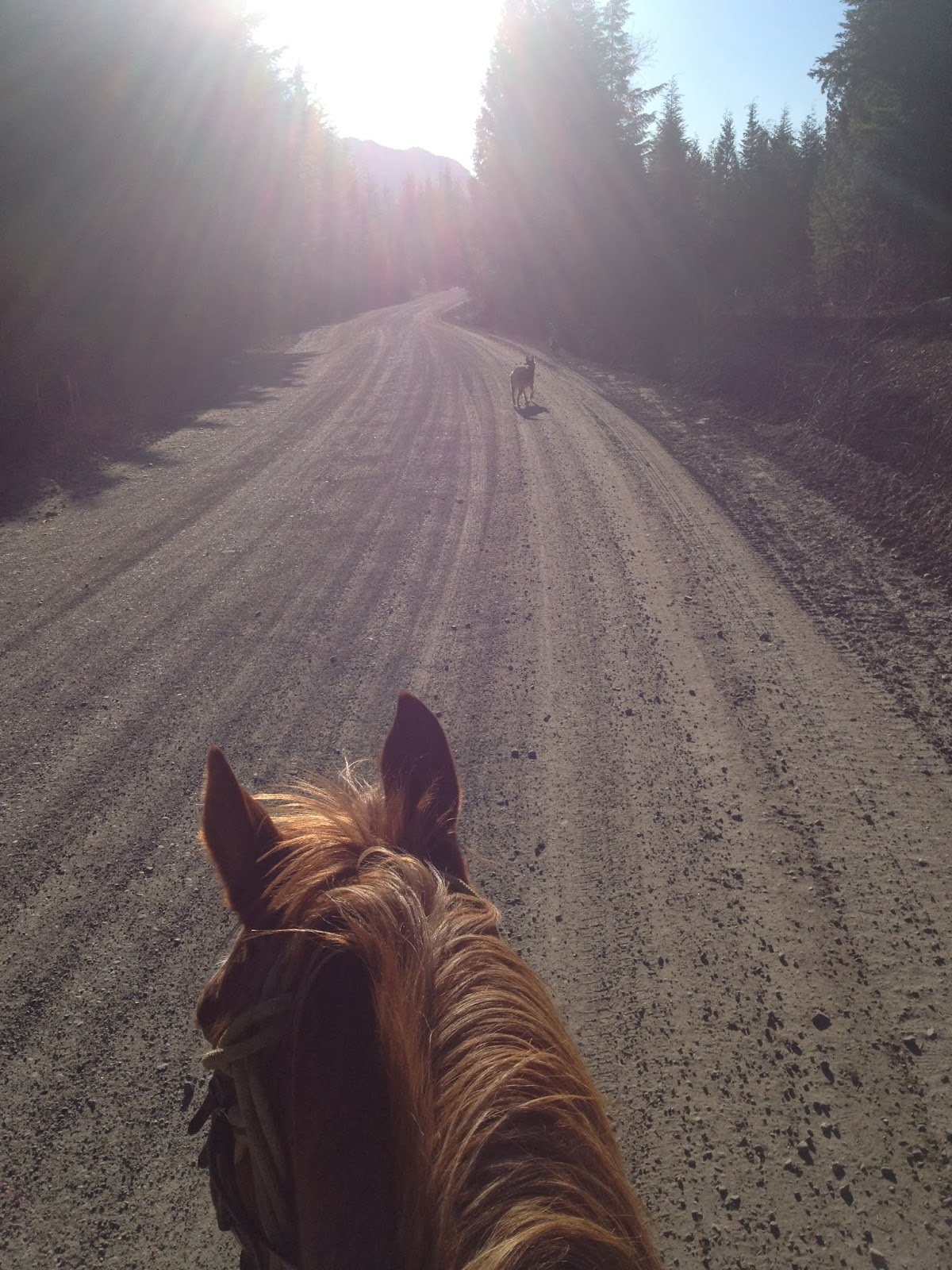 Understandably, she is stiff with the temperatures and being unmotivated to move around her paddock (I don't necessarily blame her!) and doubled with the fact that I only ever have enough time once a week (for now) to get her out walking around due to my work schedule and the poor amount of light we have. And I don't need to go in depth with the ground - it even causes me some discomfort running on it as clumps of dirt and rocks are little tripping hazards since they do not crumble away and instead, are like titanium statues! Ouch. Lastly, it'd do her good to get worked on again. I've already made arrangements with her chiro who lives 4 hours way that when she comes up in the Spring, to please put Suz on her list. Unfortunately, our area is very "horse poor" in the sense that we do not have the amenities "horse rich" areas do. We do not have horse vets here - the closest one is a 3.5hr drive away. We do not have farriers here - there are two that I know of and one is over an hour away. And we do not have an ample supply of horse feed/tack stores - there are two stores an hour away who offer horse feed but it is quite limited and the tack store we used to have, just closed last Summer.
Back to our ride, though. It was a nice little outing and Suzie was quite happy. I was very pleased she took a loose, quiet rein and was responsive to my aids throughout the ride. I cannot wait until the days get longer so I can actually start riding her after work. Please, mother nature, please!
Posted by Cathryn at 8:43 AM