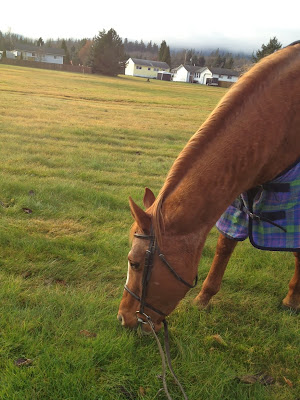 The sun was shining this afternoon and my, my take a look at that GREEN grass! I can't even recall a winter where we have had green grass in late November! It's so surreal, and a tad depressing to be honest... I think that the horses are enjoying it, though, but the MUD!!! Quelle horreur!

I was too lazy to tack up, considering my saddle is at the other boarding facility since Suzie will be returning there late March and I assumed it would've already snowed and I wouldn't be riding! How wrong was I.... Anywho, I threw a sweat sheet onto Suzie to keep my pants somewhat clean and we rode down the street just like the other day and I rode her lightly at the walk, jog, and about a few steps of the lope. She seemed so ouchy on her feet though so I mostly just puttered around.

I think it has to do with the fact that her feet are just SO tender :( I hand-walked her home as I felt bad for taking her out in the first place. I let her snack on some grass as a treat, massaged her out a bit when we got back and did some stretching again.

She was pretty good and actually spooked on me today! I have never had this mare spook on me before! Maybe the cooler weather in the last few days is getting to her head... Either way, she recovered just fine and was perfect as an angel when we were in the field. As you can probably see, the field backs up onto people's homes. On the right hand side of the photo (behind me) there are apartment complexes and beyond the field is a children's playground and ironically enough, my street backs up onto that field!

It's kind of weird, because where Suzie is boarded, it's kind of like a subdivision with large acreage lots so the "non-country" folk are literally a five minute walk down the street. The primary place where Suz is boarded (where she was all summer/fall) is about a 20min walk away from "non country" folk and it's quite a large acreage property. Kind of weird, but that's the way we have it set up around here!