Snow One Day.... Green Grass The Next! 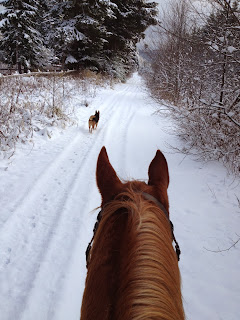 It almost seems as though Mother Nature has no idea as to what she's doing. One day it's snowing, the next it's raining and now.... warm. I'm not necessarily complaining, but I feel for the ponies who are struggling to keep up with not only the temperature changes, but the icky mud that has already started!

I embraced the snow for the first few days - didn't bother even tacking up Suzie, just threw a blanket on and her english bridle. She was mildly behaved. Sucking back majorly and was overall just wanting to turn around and head home. She attempted to pig-root twice and with it being slippery and the sides of the trail being somewhat spongy I didn't really want to argue with her and have her slip and fall. So, I managed with what I could and kicked her little booty into shape. It's funny because she wants to go back to her first barn, not the one she's at right now for the Winter so she keeps trying to go back there since the First Barn isn't that far away. On the walk home though, she settled down and we quietly jogged for a bit and she took up the long rein and puttered home. 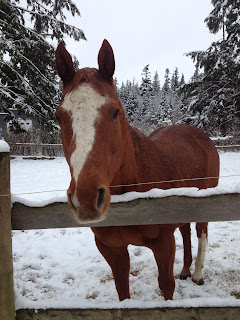 And then it became a battle with Mother Nature. Poor Suz still has her shoes on and the snow has been clumping like crazy in her hooves! I WD-40'd them several times and picked them out but it didn't seem to make a majority of a difference. However, I finally got a hold of the farrier and she is coming out tomorrow to pull them off, so Suzie will be all set for Winter (finally!). Ironically, we no longer have any snow on the ground though... 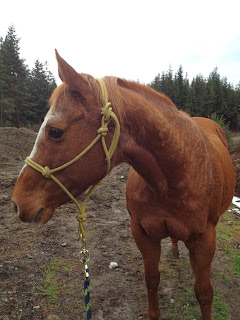 This is what it looks like! Everything is green and alive and... it's so odd! Usually, by my birthday we have several FEET of snow. Mare-pants has a good coverage of hair on her so I don't think I'll need to blanket her, but I have two blankies sitting here at home just in case the wetness gets a bit too much for her.

We just hand-walked today to get her out and about and since she is typically "fresh" when she hasn't been out in a while, I didn't want us to slip and slide out on the trails considering she isn't the smartest with her footing until we turn to go home! What a weird duck, hey? Ah well, we enjoyed our time together yesterday and I jogged beside her a bit to get her creaky bones moving a bit more.

Right now it's pouring rain and windy, so I don't think any exercise will be on the agenda and maybe I will just hide inside and crochet! LOL
Posted by Cathryn at 11:22 AM