I met Suzie back in 2010 when I volunteered to be a stable hand at an Equine Rescue run and managed by a friend I had met a few years prior. Emmy-Lou, who is the founder of the Rescue and the owner of over a head of 30 young and old horses is the reason I have my mare with me now. 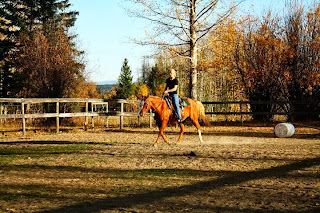 Living over 900km away; about 10.5 hours, it was a long trek to "volunteer", but I was young, brave and seeking a little excitement in my life. I was welcomed with open arms to the Rescue and rode several young and old horses, all rescues of some misfortune or misjudgement of their past lives. Suzie, I learned, was no exception.

At the time, Emmy was Suzie's primary rider, but I soon graced the saddle and fell immediately head over heels in love with her responsiveness, softness and the lick of fire in her eyes. Being a primarily English rider for all of my eight year Equestrian career, I found Suzie to be a humorous mare who put up with my "English" mistakes and carried through with the greatest of ease. She was a barrel horse replacement for Emmy, since her usual competition mare was injured. We traveled to many Gymkhanas and I watched Suzie attack each and every "game" with an open mind and a spark in her eye. 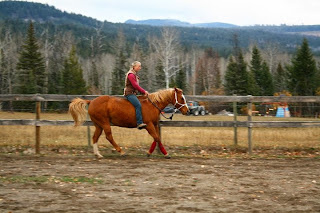 I still remember one of the times I was schooling the lope in the arena, Emmy called out to me, "Alright, that'll be good for her." I went to go sit deep, and take up the slack in my reins and before I could breathe, Suzie planted her little booty and abruptly stopped. I nearly flew over her head.

It didn't take long for Emmy to realize I was completely in love with the little red mare, that I looked forward to every ride on her. As my relationship with Suzie unfolded a bit more - I primarily rode an OTTB and Off the track Standardbred during my stay and didn't have much time for Suzie since she was Emmy's competition horse for the year - I was given the information of Suzie's tricky, and kind of slippery past. 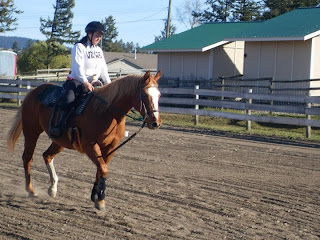 It started out in Saskatchewan, where she was born and raised. She was then sold to a woman in British Columbia (near Emmy) and the woman used her for drill teaming and gymkhanas. As the story goes, Suzie became increasingly arena sour and resistant to performing the drills. Subsequently, Suzie was 'gifted' to the Rescue and the woman purchased a much quieter horse. I never really divulged into much of Suz's past, such as how long this woman owned her or how long she was drill teamed. I don't want to guess into things or make predicaments, but in a way, I'm glad Suzie ended up where she did.

Emmy had her hands full with Suzie, and the remedy to her sourness was simple; trail riding and a lot of wet saddle blankets. With time, Emmy transformed this previous arena-nightmare into a lead trail horse and a gymkhana "back up" horse.