The boyfriend, myself and two other friends loaded up and headed south for a interview at a University for myself, with a horse trailer in tow. We opted to spend a few days so the guys could go downhill biking and myself and my friend could go shopping, etc. We actually made it more of a mini-vacation than anything. I was no stranger to the University or the interview process, as I had attempted to get in for nearly two years already and this would be my last and final attempt. The course itself was incredibly competitive and there were always hundreds of applicants.

I was feeling somewhat rebellious anyhow, and when Suzie popped up and the ability to buy her came about, I jumped at the chance. I needed some positivity in my life, I think, and Suzie would be icing on the cake. And besides, if I did get accepted, I could easily trailer Suzie back to the Ranch to live while I went to school, so win/win, right?

We dropped the trailer off at the Ranch on our way to the University/vacation and it'd be five days until I signed the paperwork and loaded MY NEW HORSE(!!) into the trailer.

She loaded up just fine and we headed off super early! We all took turns driving/sleeping and checking on Suzie during the drive. And it took a long while for me to really realize that this horse would be MINE. I never really had the ability to make choices for a horse before, considering I leased for several years. I bought bags of senior feed, grain, and other nutrional ammenities. I dropped nearly $400 in a tack store getting Western get-up and other things. It's funny because:

#1. I was trained classically English. I rode Western
from time to time, but never really "RODE" Western... and
here I was, buying a Western horse.

#3. I LOVED Geldings... so why was I going
for a mare?!
I can't say for sure what made me fall in love with Suzie, but I think that it was just meant to be.... Just like my dog. We were supposed to adopt a purebred, non-shedding, female, small dog and ended up with (and not complaining!) a German Shepherd/Collie X, male, large dog that sheds! LOL. Sometimes life is just funny like that.


And so, the little red mare travelled 10 hours across the Province to join me. To let me love her. To bring me back to life. 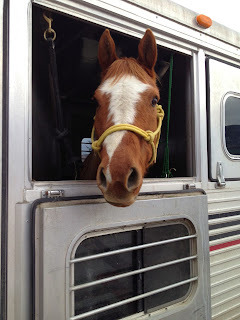