Being a back-up barrel horse kept Suzie busy, and to be honest, I think she really enjoyed it. She trailered like a dream, always warmed up like a seasoned pro and took to each gymkhana game like it was a piece of cake. She wasn't the flashiest or the fastest, but, as they say, she "got shit done". She was a lot of fun to watch, and would be fired up for the games and then come out of the arena as cool as a cucumber.

Emmy always joked that she was going to "force" Suzie on me, and I always joked back that it wouldn't take much forcing for me to take her. During my stay at the Ranch, I lost a huge part of who I am when my lease horse back home passed away in November. I felt so lost, so confused and like a piece of me died inside. I grieved for a very long time afterwards, unwilling to reach out to any horse activities or be a part of anything remotely equestrian related. When I came home, I was depressed, resistive and angry.

It took a while before I branched out and found another lease horse. I ended up with a naughty Thoroughbred/Quarter Horse gelding and most rides ended in being thankful I didn't end up eating dirt. Geronimo was a beauty, and he was a lot of fun for me to learn on and grow with. Him and I went "far" and I learnt a lot with him; he was touchy, hot and a bit unpredictable but I grew to embrace his antics and his crazy shenanigans. 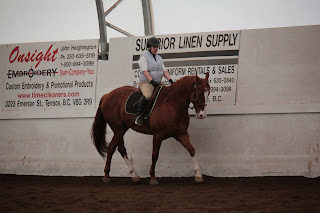 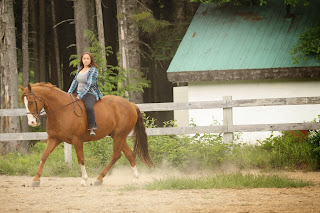 I rode him for two years and during that time, we battled lameness issues and a very upsetting and scary choke that caused him to be out of work for nearly 6 months. We became an unstoppable pair and I don't think he was ever trailered so much in his life! But, in February of 2013 I took a pretty nasty fall which landed me in the ER and unable to walk for two days and the doctors yet again cornered me and told me that I had better smartened up with the horses I chose to ride. You see, I have several complications in my personal health and adding a hot, unpredictable horse to the mix just isn't the answer. Despite that, I continued to ride him and enjoy him.

During that time, however, I was approached by Emmy, yet again "threatening" to drop Suzie off on my doorstep after I had commented on several photos of her. This time, Emmy was serious, and so was I.


I had been aching for a horse of my own for a while, and Geronimo's owner was not too keen to part with him despite mine and his relationship and transformation. I accepted that and as Emmy began to divulge more information, I found myself getting more and more excited at the possibility.

I began to hunt high and low for a boarding facility - they are minimal at best here - and ensuring I had adequate funds to keep her. It all checked out, and I set the date. Ironically enough, I was heading down past where Suzie was to go for an interview to a potential school for Vet Tech. Not really practical to bring a horse back with me, but gosh, did it ever work out in the end!