I have found with my mare that not everything has been perfect; most specifically, trail riding.

We have had our ups and downs with her behavioural issues on the trail with me; which is hilarious providing the fact that she was number one trail horse from where I got her. Suzie knew I was a bit of a pushover and used that to her advantage and thus, we had trail problems.

She'd stop and refuse to go. Back up as fast as she could and no amount of face pulling, kicking or smacking I could do would make her move forward in the least. Suzie would pigroot and spin around towards home, try jogging off towards home and even reared on me. She became more resilient and bold with me, even pulling the same stunts in the arena until I had decided I had had enough.

We worked on the problem and I found myself getting frustrated because we weren't getting better. And I wish I had seen that /I/ was the core of our problems before it got to the point where I was starting to get a bit fearful over trail riding.

The simplest thing caused a turmoil of misbehavior - I expected perfection each and every time.

How was Suzie supposed to enjoy trail riding with me nit-picking each and every thing she was doing? "No, stop here. Stop HERE. Stand.... stand... Walk five paces... Stop. Stop. Back up. Walk for six paces, back up. Walk. Trot a few steps. Stop. Back up." How was THAT fun for her? 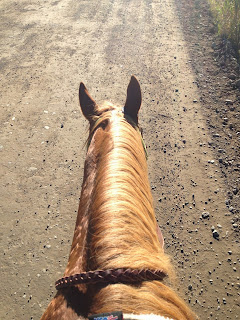 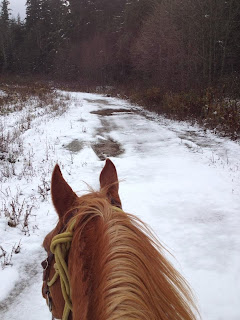 I stopped nit picking. And yes, it did take more than just letting go. I started lunging her in the lower field, away from her stablemates. I lunged her prior to trail riding to drain excess energy if needed. I worked up to walk, jogging and loping in the lower field out of eyesight of the other horses. I trailered her to a local arena and had her work by herself there. I took several "mini" trail rides up and down the driveway, etc. I worked hard to get the results I wanted to, but in the end, letting go assisted tenfold.


Sometimes instead of expecting a horse to be perfect right away, you work on small things and then build on them. Rome wasn't built in a day and our trail riding woes won't be gone overnight.