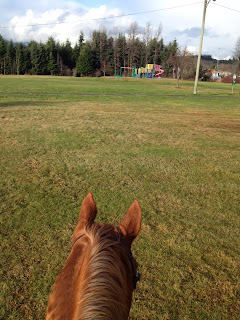 So yesterday it was sunny - much to my surprise(!), the snow must've melted overnight or something. I grabbed my English saddle and Western bridle and headed out, intent on going for a trail ride. There is a park down the street and across the road from where Suz is boarded so I figured I'd head there and do some jogging and loping. Interestingly enough, the big meadow/park is also behind the street I live on!


We tacked up and she was a bit fidgety and jittery, but nothing too out of the ordinary. I hopped up and we headed out and she was all game - ears pricked forward and flopping around listening to my legs. She was kind of sucking back on my legs like she didn't want to move forward but would listen to my request when I asked her to move out, more forward. She was a bit sticky, but still listened.

We went to the meadow/park and did some jogging exercises but she felt a bit ouchy every so often, so I decided to keep it at the walk. And then I had a bright idea to trail ride her through town to go say hello to a friend, so I did. 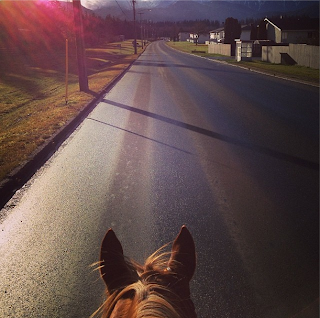 Where I live there isn't much traffic, so I wasn't concerned with being too overwhelmed. She did quite well and I was happy. There was only one instance I was concerned, as we were walking along the grass (in the picture above on the left hand side) and there was new grass that had been laid down and I guess it was super mushy and Suzie sunk up to her knees in it! I made her power through it instead of turning around, as she felt quite unstable. But, we made it through okay and continued on like nothing happened. On the way home, we walked on the road (pictured above).

It was a lot of fun and she was so well behaved. Today however, I think I will be starting her on her arthritis meds again and next week her shoes will hopefully be pulled and her hooves will be trimmed for the winter.