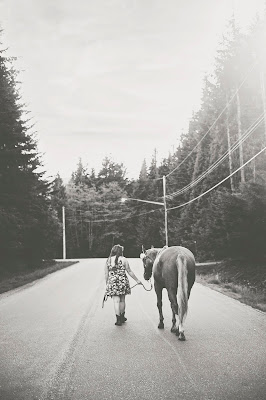 It's nearly been two months since I laid Suzie to rest.

While my barn time is much more bearable now, sometimes I just can't fully grasp the concept she is truly gone. In fact, there have been days where I swear I can see her, or feel her presence. One particular occasion left me sidelined with grief and confusion.

It happened about a month ago - after filling the water trough, I bent down to coil up the hose and a rustling sound from the paddock made me look back up. When I did, I could've swore my red mare was standing there, blinking back at me. My heart filled with instant happiness and just as quickly, plummeted into heartache when I realized that it wasn't her.

It made me incredibly sad - the impact of her loss is still painfully evident. The empty western saddle I once tossed up on her back now sits in my tack room at home, collecting dust. Her halter sits in a bag waiting for me to one day have the courage to make a shadow box in her memory. 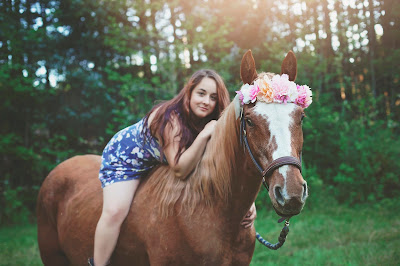 The weird "sighting" was nothing more than the brain playing tricks, I know. But as the weeks rolled by without a glimpse, I ached for a sign of her presence.

I am not a spiritual person by nature. In fact, I play out the rationality of things in my mind all the time. But loss and grief are two things that are very difficult for me to process. Something inside of me wants to be connected so badly to those I have loved and lost. Little trinkets that remind me of them, or simple ways to honor their memory is how my heart gets by. So these weird little sightings, while initially made me incredibly sad, started to bring some happiness into my life.

I don't necessarily go looking for things I can mistake as Suzie. In fact, the times I have seen or felt her have been times where I am completely thrown off guard. And while I am sure there are logical explanations for these encounters, I have decided to be blissfully ignorant to them.

The last time I saw Suzie was a few weeks ago. It was dark outside and I had just pulled into the barn to feed grain. I rounded the corner of the driveway and before settling into park, flicked the truck's high beams on. The lights caught the wind-swept carvings of snow, long settled from a previous night's snowstorm before landing on Suzie's head and neck. She stood there, staring at me from the back portion of the paddock. I felt completely breathless as I stepped out of the truck, unwilling myself to blink. Walking up to the fence, I swallowed hard and told her how much I missed her. 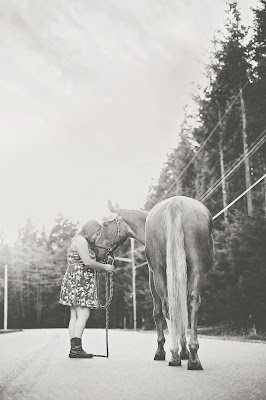