Wearing My Heart on My Sleeve

When Suzie passed away, like most equestrians, I cut away sections of her mane and tail. I had wanted to (at some point) have a bracelet or keychain tassel made in her memory, when I was ready.

I was kind of picky about what I wanted though, because I wanted something I could wear every day (if I wanted). The typical horse hair memory bracelets are very delicate looking and I feared I would snag it on something and end up breaking it. 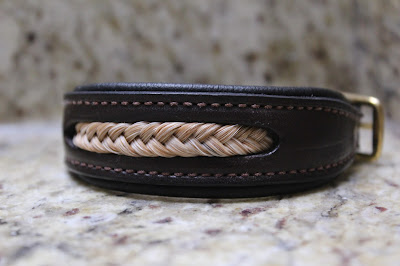 After a few weeks of research, I came across Enter At A's studio and after a few questions, I placed an order and sent a portion of Suzie's hair. I was nervous about it being lost in the mail, but since I had cut so much of it, I knew I had "back up" amounts should I need.

I needn't worry, as it arrived just fine.

A few weeks later, I anxiously began to check my mailbox and finally, I was able to see the bracelet for the very first time.


The pictures really do not do it justice - the hair is quite secure in the little slot in the leather and doesn't snag or catch on clothing. I chose a very conservative color scheme (brown/black), but Enter At A can do any color combination, which is pretty fun if your horse had a certain color associated with them.

The bracelet itself is a bit stiff (which is to be assumed with leather), but I imagine it'll break in eventually with more wear. It isn't super uncomfortable unless it rests on my wrist bones, but I just turn it off-center for the time being until it stretches more. 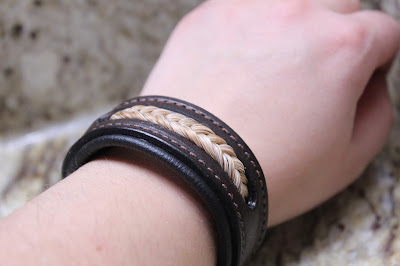 The bracelet means so much more to me than any other piece of hand jewelry I own - it holds an infinite amount of value. I find myself staring down at it and tracing the braiding from side to side, reminiscing about my time with Suzie and how fortunate I was to call her my own.

It's a nice nod to my red mare, and a beautiful honor to her memory.


She will continue to be missed, but I feel more connected to her and find myself comforted by the bracelet and what it means to me.
Posted by Cathryn at 7:00 AM