Since coming home from the BVX, I haven't been able to do much riding. In part, this is due to work (we have a 3 week on, 1 week off rotation), but also because my parents came up to visit for a week and a half to be present for the birth of my sister's fourth kiddo. With all of the family time and subsequent baby oogling, pony time has been limited to ground work and having Spud take the nephews for a spin.

I found Annie was quite spooky when returning from the BVX - she gravitated and attached herself to Suzie every opportunity she could get. I took it as an opportunity to start working on standing tied quietly, especially when Annie is already worked up and nervous. It's always easier to work on stuff like that in a controlled environment, especially when you don't have time constraints.

There is a large tree in one of the three paddocks (my horses have full access to all three at all times) and I decided it would be the best place to tie Annie. The tree is sturdy and it also would be a safe space should Annie pull any stunts. She ties really well by the tack room and immediately cocks a leg, so I figured I'd try something different and "weird" just for the added shock value. (My poor mare, haha).

Outfitted with two halters and leads, I tied her to the tree. One lead was slightly longer than the other. The reason I tied with two is because I've noticed she seems to understand how to undo leadropes (either that, or it somehow just comes undone?) Either way, I wanted to have a secondary restraint in case she untied herself or heaven forbid, pulled back and broke her halter.

I needn't worry because she mostly just paced around the tree, pawed, and whipped her head around to see where Suzie was. It really was no different than what she did at the BVX, although a little less frantic. I let her work out whatever issues she had on her own while I picked poo, scrubbed the water trough, and did other chores. I was always within 30ft of her and able to watch her as I went about my chores. She settled after about 15 minutes and stood there, cocking a leg and waiting patiently for me to untie her.

When I went up to her, she started to wiggle again, as if saying, "I WAS SO PATIENT LET ME GO PLS NOW MOM. KTHX." I instead patted her and returned to my chores. I received a pretty hefty mare glare, but told her it was for her own good.

In addition to the tying, I've also went back to ground work a bit more than I had previously. She decided to spook away from the fly spray one evening, so I went and grabbed her halter, made her stand, and finished spraying her. Poor Annie though, because I tore her away from her grain/mash and did a few exercises like jumping up and down, running, kicking rocks, twirling the leadrope, etc. She was actually pretty fidgety during the jumping stuff, so it's something we will have to repeat.

I don't recall her being this spooky/fidgety in the past, so I'm not sure if it is due to the quantity of alfalfa she has been getting in the last month? Anyone else have issues with their horse becoming hotter from alfalfa? I know Murray has erm... sensitivities to it that make him channel his acrobatic personality.

I was finally able to ride this past Saturday with Nicole and AJ - we had initially planned to meet up and trail ride, but Annie had other ideas. I can't completely fault her, because I hadn't ridden in about 10 days and didn't lunge her or anything prior to the ride.

I had intended to bring Spud and pony him along, but Annie - who was good for being tacked up, standing beside the mounting block, etc - decided that as soon as I got on her back, she was going to bolt forwards and then slam on the brakes and rinse and repeat. So... I was like k this is not fun, horse. I asked her to go forwards again and she erupted forwards - it didn't feel like she was going to take off at a death gallop, but she certainly leapt forwards with more enthusiasm than I wanted. I asked her to halt and then she tried to spin around on me. Spud, bless his heart, didn't exactly follow suit and was being yanked forwards and ended up standing backwards, facing me and parallel to Annie's armpit. At that point, I threw in the towel on ponying and figured it would be more of a hazard to try and continue with Spud along and decided this would be best to hash out one on one. I hopped off and put Spud back in the barn before getting back on.

After I mounted, she did the whole leap forward and slam on the brakes twice more before I just kicked her forwards and let her trot down part of the driveway. I half halted and asked her to walk and she complied, although took a few jiggy steps. I so badly wanted to keep my legs off of her (old habits die hard), but pushed myself to really PUT my legs on her barrel and start asking for some leg yielding. She was really resistant and threw her head up a few times because, "fuck you".

I just kept it slow, asking her to move over a step or two, pat to reward and letting her walk a few steps before asking again. She complied and was leg yielding both directions with ease without threatening to take off trotting or throwing her head in the air. The whole idea is that when she gets like that, I don't want her to learn I'll back off. She has to know that when she flips me the bird or acts flighty/bolty, I'll just ask her to do WORK (most of it is more mental than physical effort). After the little exercise, she was happy to walk on a loose rein.

She spooked at a few things on the walk over, which is kind of weird because she doesn't normally spook at much. Maybe the alfalfa is corrupting her brain, idk.

We met up with Nicole who was riding AJ and ponying her mom's old horse, Flash. I had Annie walk beside AJ and decided we should go to the fairgrounds so I could ride Annie in the ring due to the fact she could probably benefit from a good school. All was well, except for when we got to the open meadow and I walked Annie beside Flash. Without me even realizing, she did her own version of a haunches in towards him and gave a hearty mule kick in his direction.

Uh, no thank you.

She hadn't ever done that before, so I gave her a good spanking. Her kick was intentional and deliberate, especially since we weren't even *that* close. Thankfully, she didn't actually make contact with Flash and no one was really worse for the wear.

I expected the ride in the ring to be... interesting, but was pleasantly surprised to find that she was more than willing to go to work and more than willing to do all the things I asked. She tried to suck towards the other horses, and I was like, "K, well, you were a huge bitch so they don't like you." and we just went to work.

We did so much in the ring - 15m circles, 20m circles, extended trot across the diagonals (aka fast trot), collected trot in the short sides (aka slow trot), halt and back up, outside bend and inside bend, canter/trot transitions and even got a canter/walk transition! She picked up her bad lead really well - only got it wrong twice and after I pushed her shoulders over and leg yielded into it she picked it up.

In the middle of the session, she started to feel sucked back in the hind end, so I worked on getting into a half seat (was using my jump saddle) and just pushing her forward and letting her hand gallop. She was dead tired by the end of it all, so I was only able to eek out a bit of "gallop" before she died on me.

I was pretty impressed with her in the arena - 10 days off and no bucking, bolting (well... aside from the beginning of the ride hah) and a great work ethic. She may have mare-tude, but she certainly makes up for it!

Regardless of the shenanigans, it was a really good school and I feel like a lot of that is attributed to the fact that I rode with a purpose. Yes, I wasn't pleased with her for her attitude earlier in the ride, but instead of being angry I channeled it into, "You will do XYZ because you know how to do XYZ and you will do it because I asked." I didn't get into a single fight with her, didn't pussy-foot around things I know are hard for her to do. I just asked her to do them, expected her to do them (within reason, of course, our 20m canter left is still a mess) and just went with it. There were even a few times she felt like a bendy worm and I enjoyed her ability to move her body so freely and confidently. We did a lot of serpentines and figure eights to change the bend and although I would say our accuracy left much to be desired, she was bending and stepping around my inside leg. A great feeling to say the least!

I ended the ride after some stretchy trot work (we even got a few steps!) and we hacked back down the trail and to the road. We made sure to keep Flash at a safe distance and I practiced haunches in down the trail to keep Annie's hind end tipped to the outside more. She pinned her ears a few times and I could feel her hind end get a little humpy when Flash came too close (Annie was following AJ and Flash then took the lead over after one of the larger hills), but I growled at her and she carried on her way. Good girl.

It can be frustrating, bringing along a young horse. I've said it before, especially when random things like mule-kicking come up and make you question if you handled it the right way or reacted properly. Over the last week or so, I've slowly started to lose the panic that is associated in bringing along a young horse. Previously, I would have been intimidated or even scared by the naughtiness she threw at me when I got on, but now I just ignore most of it and carry on. Baby horses have a good way of testing our patience and it can be hard to not expect them to do xyz all the time, but sometimes we have to just roll with the punches and not take things so personally when issues present themselves.

^ I was going to make this into a gif, but I love the sound of her
hoof-beats and my laughter at the end.


Although the ride wasn't 100% what I had in mind, I actually got teary eyed as we cantered down the dirt road towards home - this horse hasn't even been broke for 10 months (lets not forget she sat for 4 of those months due to the snow) and she is already so much of what I was missing. So for now, while I will blog about the struggles and the hard parts, I am learning to be so much more appreciative of the "little" things and the positive strides we make. 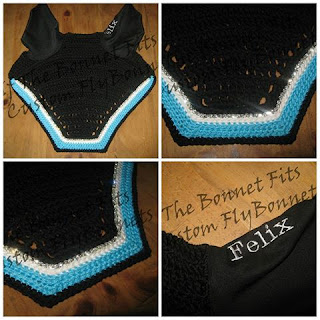