An Update on Ty

While I don't blog about my dogs often, they do make several appearances in my blogging content in the means of pictures or short blurbs here and there. Most days, my blog deeply reflects my horses and our adventures together. Today, it is all about my four-legged best friend.

For those who don't know - Ty is a Shepherd my parents adopted for me as a gift in the winter of 2004. I've had him for a large portion of my life and he has been a constant companion to me, especially during my growth and fight against PTSD and a variety of other anxiety related issues.

Earlier this year, the Boyfriend and I noticed something was not quite right with Ty. It started out as small things - unwilling to sit evenly on his haunches, occasionally dragging his toes on the asphalt, waking up stiff in the mornings. It was around early April I started to notice all of these things and they begun to compound into a rolling ball of moss.

He started to drag both paws on the asphalt - more frequently and much more noticeably than before. He'd walk with this super weird tempo - bouncy steps, but with no rhythm. His nails also started to get worn down, especially the two central toes, from all of the toe dragging.

I assumed he was showing signs of hip dysplasia, so I started him on some anti-inflammatory treatments and arthritic supplements to see if it could help with his stiffness and weird walking.

So, I booked a vet appointment.

The vet at our small animal clinic did a full evaluation and even before sending Ty for radiographs, seemed to know instantly what the problem was. In addition to a few tests (which included walking up and down the curb, trotting out, etc), he found a largely delayed response in a "paw flip" test. Here, the vet disclosed he feared Ty was beginning to struggle with some kind of neurological issue, stemming from his spine.

He began apologizing to me, "I am really sorry, but you're going to hate me for saying this... It is tough when our younger dogs get these kinds of issues."

I asked him how old he thought Ty was, as this vet has known him for most of his life.

He responded by asking, "Didn't you just hike him last year on some pretty intense trails?"

He was shocked when I reminded him Ty would be turning 13 in October and complimented me on my dog's otherwise excellent health. 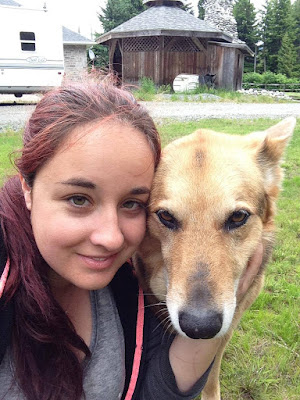 Not long after, the tech's came and took Ty for a series of radiographs. Weirdly enough, the x-rays showed no real issues aside from a minor inconsistency between two of the discs. Even more interesting, Ty's hips are completely free of arthritis or any other breed-related issues Shepherds tend to get. The small little blip on his spine was the only indication of a problem.

Which is kind of hard to hear. 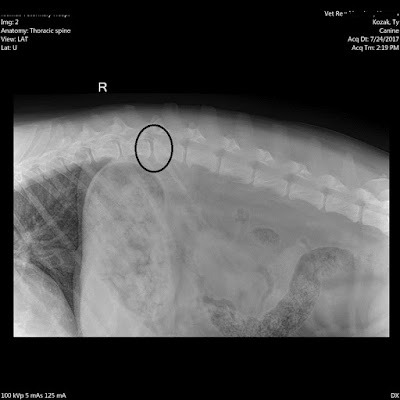 Having a perfectly healthy dog with a teeny tiny speck on one portion of his spine. A tiny speck that is going to cause a very intense and incurable set of issues.

It's almost like being so close to something but having an impenetrable barrier in the way - no matter what, there is nothing I can do to fix it. Which really, really sucks.

I stayed quite a while past my appointment time I'm sure, talking with the vet and discussing various options. Without an MRI (which we do not have in this area), we can't exactly determine if this is some kind of degenerative myelopathy, type 2 disc disease, or some other spinal issue. We know for certain it is not trauma related (we re-did x-rays a few weeks later because I am neurotic). All we know is there is some kind of degeneration happening within his spine that will eventually cause him to become paralyzed.

There is no fast and hard time-frame for when complete paralysis will occur and there is no telling how Ty will ultimately respond to the changes his body undergoes as the disease evolves.

And it scares me beyond belief.

The last six months have been a whirlwind of adjusting our lives and our home to fit Ty's new lifestyle. Additional carpets have been installed, especially on our hardwood surfaces where Ty finds it hard to balance and slips. He wears goofy little dog socks with rubber pads on his hind legs for extra grip. He uses a dog ramp to get in and out of the vehicle (which he hates, thank you very much). And he rarely gets walked and when he does, it's short 15-30 minute strolls around the neighborhood depending on how he is feeling.

I have found myself bringing him to the barn almost every time I go, because he loves growling at the horses when they get too pushy for grain, and he loves sneaking a bite of poop when I'm not looking.

I've laid on the freshly cut lawn and cradled his head and kissed his muzzle.

I have let him win so many games of tug of war.

I've cried so many tears into his neck, telling him how sorry I am there is nothing I can do to help him.

The end result is always going to be the same, which is why I find it so hard to accept most days.

And a lot of friends have tried to be helpful. A family member actually suggested purchasing a cart or wheelchair if he becomes completely paralyzed. And I've tossed the idea around a time or two.

But the more I think about it, it's just not Ty.

He's a very stoic and proud dog. Not unlike my Suzie-mare. He doesn't like us helping him in any regard. And it's not that he is aggressive. He is far from it.

He's a gentleman and pride radiates from him like rays of sunshine. He takes his place in this world very seriously and with the other issues old age brings (lack of hearing especially), he is trying to paw his way through and make sense of what is happening to his body.

Although carts can be really helpful, they are not meant as a means for indoor transportation, especially for a big dog. Paralyzed dogs often are moved from room to room by their owners and without the means of being able to completely feel, some are subjected to wearing diapers or otherwise due to being unable to control their bladder and bowels. This opens a whole new can of worms with bed sores, depression, and a whole myriad of other issues.

It just isn't a life I want him to live.

For now, I'm trying to balance the necessity to pre-plan for the future, but also be guarded about how I make those decisions. Everything is more or less up to him and the rate of this disease. Both of which are out of my control.

So, I continue to bring him out to the horses so he can pretend he's a real herding dog.

I continue to shuffle along the street with him, smiling as he gets quiet bursts of energy to frolick like a half-drunken goofball.

I continue to let him sneak the last piece of chicken.

And I will continue to do these things for as long as we are able. 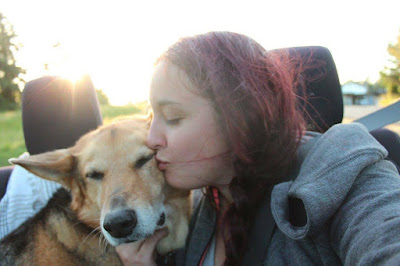