The weather changed drastically in the last few days - from being unbearably hot, to leveling out into decent weather, to going Full Blown Autumn. I've started wearing a coat over my usual hoodie and it's kind of painful that our summer disappeared that fast. In a way though, I am kind of glad the weather has gotten colder - a good portion of British Columbia has been fighting a losing battle with wild-fires and I am sure the cooler/rainy weather is helping. 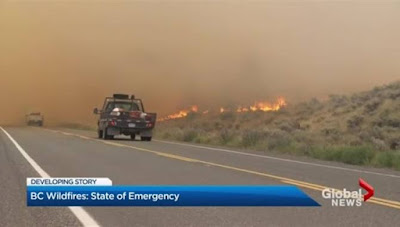 With the anticipation of Fall steadily approaching, I've been upping Spud's workload in preparation for the BVX. I am aiming to do similar classes to what I did last year, but have entered the open category as opposed to "1st Year Driver" like I did last year. This will make me eligible to compete for Driving High Point as well as the Arena Driving Trial. I am unsure if going into this competitively is a good idea though, mostly because there are no hitch divisions in this show - all hitches  are in the same category. For example, in most driving shows, VSE (Very Small Equines) are in their own separate category and Ponies are in their own category. At this show, due to the low level of competitors, everyone is sandwiched together.

It really throws things off, especially when some of the events are timed and there are certain restrictions. At this show, we are only allowed to trot the cones course. This is sort of a catch 22, because the Ponies can trot much faster than any other hitch AND they have the ability to make tight turns. The Horse hitches just can't make the same time they can, and as I found out last year, neither can Spud.

We will do our best though, and obviously cheer on the other competitors just like last year!

For the BVX, I had considered taking both horses, but the finances just wouldn't allow the wiggle room to bring both. I had to make a decision as to who I'd bring and what I'd enter, and in the end, I chose to bring Spud.

My reasoning for leaving Annie behind doesn't have anything to do with the Timberland show - in fact, the Timberland show was a good sounding board in showing us where we stood. Unfortunately, the BVX has a very short class-list for walk/trot, so I would be limited to four classes essentially.

For some, packing up and heading out for a weekend (or in this case, 5 days) and showing 4 classes is the norm. For me, the effort and $$ it takes to make it happen just isn't there this year.

There is the option to take her and just not ride in any classes and instead school the arenas but I decided against this, purely for the fact that the BVX is BUSY.

And I don't mean that Annie couldn't handle it - I mean there is more going on than just horse showing. There are dog shows, parades, rodeos, eating contests, magic performances, concerts, etc. When we go, we go to have fun and watch the bucking broncs and eat corn on a stick. Last year, when I wanted to school Spud the day before our classes, I had a hard time finding an open arena until it was later in the evening (which caused us to miss some of the rodeo). I don't like interrupting people's rides, especially if they are warming up or schooling before their tests.

I'd much rather prefer to take her next year, or even the year after that, when we can ride in the open classes with everyone else and when both of us have more experience and confidence in the arena to make it a positive and successful outing.

Anyways - we've been dabbling our toes back into the arena again. It was interesting, given the fact that Annie had about six days off and was borderline neglected during that time. She was good though - she stopped once while coming out of the street onto the roadway and protested when I asked her to walk off. I gave her a good tap with the whip and she tried to be adamant that we should just go back to the barn - I declined, she accepted, and we carried on.  I didn't need to remind her again and she was happy to tug Spud along for the remainder of the session.

We met up with N and AJ and wandered to the arena. N was wanted to trail ride, so I wasn't able to put in a true school in the arena but we went through her paces. After two botched attempts I got her canter, but she was hopping in the front like an idiot every time I brought her back to trot to try to get the lead again. I basically just rode it out and kept trotting along until her brain re-installed and then we tried it again.

It wasn't the best ride - she was sucking to the gate when N and AJ left and was really behind the leg. I was riding in the Western saddle, so I don't know if I just don't have the ability to fully get my legs on her when I'm in it. The behind the leg feeling was more at the canter - it felt SO collected and bunched up - so I really tried to just kick her forwards and let her gallop. She didn't really oblige, but I did get some lengthen of her stride. N called out that it looked like she wasn't really stepping under herself in her haunches - I'm not sure why she lacked forward, as I've never felt that before in her, but it could have been attributed to the fact AJ made Annie go into full blown heat again and her lover was outside of the arena without her.

I was happy though - no bucking, bolting, or theatrics. Walk, trot, canter with some sass and then we headed out on the trails.

I made Annie follow this time and she did really good, especially considering she was ponying Spud along. We ended up going along a shallow loop and headed back into the subdivision and took the long way home along the road. Annie was quiet and plodded along on a loose rein the entire way - she even walked slow enough that Spud could walk for once! Poor guy is always trotting to catch up.

N and I parted ways by the dirt road and Annie turned around to go home nice and quiet. I even got her to sidepass up to the truck's tailgate to get off (something we had issues with in the past).

Not the best, or maybe most productive ride, but it was interesting to see how she was after some time off and extra calories (I've been revamping my feeding to help her gain some weight). I have three more days of work and then hopefully I can get some good schools on both Annie and Spud before we travel to the BVX!
Posted by Cathryn at 2:37 PM