Thursday morning came bright and early – I didn’t ride until 9:30, which would be the first ride of the day – but Show Buddy and I were up to feed the horses ahead of time. It was brisk and cold out, which meant that after the long walk to the barns, I was more or less awake and with nerves settling in, I wasn’t able to get back to sleep. Instead, I cleaned my tack and got things ready before wandering back down to the barn and grabbing Annie.

She was wiggly at the trailer, wondering where her friends were no doubt, and I had to remind her a few times to stand quiet. She was good to tack up though, and after I got changed I saw we were well ahead of schedule. Instead of hanging out at the trailer, I opted to wander to the warm up arena. No one else was really around and we were the only pair in the ring, which was kind of nice. Unfortunately tho, I had some issues mounting because my tall boots still aren’t completely broken in and I couldn’t even reach my leg up into my stirrup. I had to drop my stirrup down a few holes and managed to clamber on – have I ever mentioned I hate mounting from the ground?


Annie was a bit tense when I got on, jogging a few strides before settling down into a nice forward walk. I opted to stick with a walk/trot only warm up in case she needed some extra time and didn’t want to fool around with the canter too much since we wouldn’t be utilizing it anyways. I remember feeling pretty good about the warm up and asked a friend what time it was – we still had twenty minutes. I kept Annie walking around and engaged vs standing ring-side. I didn’t want to lose her or have my own nervous energy bubble up just standing there.

When they called for us, I marched Annie around the outside perimeter of the fence and by the Judge’s booth – she had no problem with any of it and didn’t even so much as blink at the Judge. I said good morning and continued on my way until the bell rang. Picking up my trot on the long side, we went around the bit check building and down towards A. 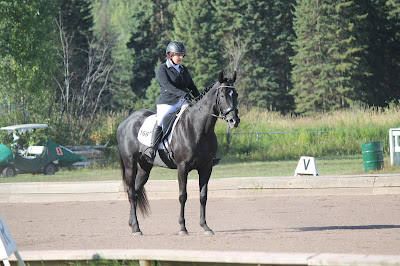 Our first test felt pretty good – she was rideable, although felt behind the leg. Because I don’t really have a Dressage arena to practice in, our figures were not that great. All in all though, I was pretty pleased aside from whatever weird thing she did during our second 20m circle. After the test, I asked a few people what she did and no one was really sure if she was preparing to buck, was just throwing her head, tripping, or trying to scratch herself. My best guess is a little of each?

Or maybe her and Levi had some weird telepathic conversation going on that Olivia and I didn't know about? 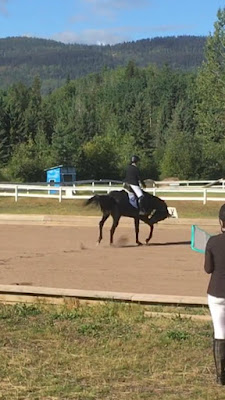 During the test, it felt like she was throwing her head down in protest, but it almost looks like she tripped in the video. In any case, you will see that shortly after her weirdness, she protested to the tap of the whip I gave her. I do love that after the tap of the whip she was like, “NO, fuck YOU.” and then, “OK let’s trot.” I kind of botched the final centerline by not riding into my corners, but we managed to get it done. 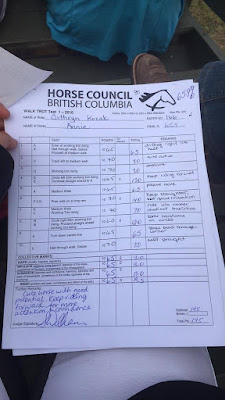 The Judge asked me if I wanted to ride my tests back to back, since I was the only competitor in that level. I said yes and we wandered back to the far side of the ring and waited for the bell to ring.

The second test was my favorite, aside from the obvious lack of steering and pilot errors (esp for the turn at E and X). The last trot circle felt SO wonderful and although she wasn’t connected in the bridle, she felt really great. She did still feel behind the leg, but she seemed more “in tune” with me. I was happy with her performance; and even happier when I learned that apparently a 4-H cow got loose during our test and made its way to the warm up arena where all the Dressage riders promptly dismounted, haha. Clearly Annie and I didn’t even notice, because a few people mentioned it and I don’t even recall any kind of commotion happening.

Overall, very happy that pony showed up to work even tho we were by ourselves for the first test and the show grounds was starting to bustle with activity by the time we did our second test. 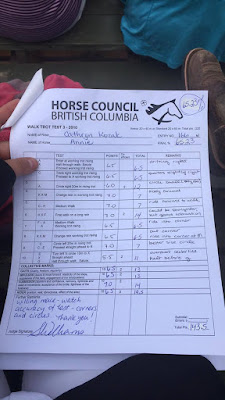 With the two tests finished, we went to get ready for our Halter and Showmanship classes. I didn’t necessarily want to do the in-hand classes, but figured it would be good practice and exposure for Annie. In hindsight, it was good that we did them, but also frustrating due to the poor time management. We stood around the Halter ring for a good hour or so before Show Management was realizing almost every Dressage rider had conflicting times with the Halter ring. So, the Show Management decided to just let people “show up” when they were done their tests.  I gritted my teeth and suited Annie back up and put her away in her stall, as I had already finished my tests and knew there would be a long wait time. I had spoken to Show Management and they told me to just “watch” for the other competitors I would be in the Halter class with and join them when they were ready. Which, would have been fine and all, except they were skipping over classes and going back to other classes as people showed up so I couldn’t really keep track of what class they were on since it was all mixed up.

Don’t get me wrong, I don’t mind waiting. But I was supposed to read for a friend (which the Halter classes wouldn’t have conflicted with if they had run at the appropriate time) and instead ended up having to ditch her (don’t worry, I found her another reader) and sprint to my stall to get Annie because everyone was waiting for me in the other arena! I didn’t even realize the last few riders from that class had made their way over and apologized profusely for making them and the judge wait. Everyone was pretty chill about it and a few ladies ran over to me and started ripping off Annie’s blankets and slinky while I ran to the trailer to grab my boots. It was embarrassing, but it happened quite a few times to various people. We were in a class of five and placed third, which I was pretty pleased about. Annie stood quiet for it and I was happy that even after having strangers rip off her blankets and such, she was pretty chill. She didn’t stand square tho, which was annoying but wasn’t something we have actively practiced so I couldn’t really get too upset about.


After Halter, we stood by the rail to wait for Showmanship. My feet were starting to hurt, as I had forgotten to put long boot socks on and my heels were rubbed raw by my boots. After looking at the program and back into the ring, I asked the Ring Steward how long it would be until Showmanship. I tried the fact I was annoyed when she said, “About two hours.”

With all the running back and forth and putting blankets on and off, I opted to keep Annie out. I figured it would be good for her to just graze ring-side and take in the sights and sounds. But maybe it was a bad idea, because by the time Showmanship rolled around Annie just did NOT want to play anymore. Before we had gone into the ring, Annie kept trying to doze off but would snap back awake when she heard a horse neigh or the loud speaker go off. In the class, she wasn’t dangerous or downright naughty, just was wiggly and not wanting to stand. We placed 2/2 in the class and instead of ribbons, we got to pick a prize. I picked a hot pink lunge whip because #priorities.


I don’t know if it was the long wait times or if it was because she hadn’t slept much during the night, but she was just DONE for the day. Show Buddy and I were talking about it later on that evening and we basically said the same thing – despite the fact we didn’t do much riding work, it was still a lot of mental stimulation for Annie. She is still learning and I am sure there was a lot to pay attention to while she was trying so hard to be a good girl.

Still, I was ecstatic with our Dressage tests. We showed up, did the thing (didn't leave the arena!!), and looked pretty decent doing it. I was looking forward to our flat (and final) class Friday afternoon.

Anyone else have a horse that gets mentally tired before physically?
Posted by Cathryn at 1:16 PM