Weeks Worth of Preparing

The week leading up to the horse show was a concise mixture of very subar riding and dealing with frustrating issues I had thought we were over. Helpful hint: greenies don't just "get over" things in the matter of a few rides, especially when there is a show coming up! 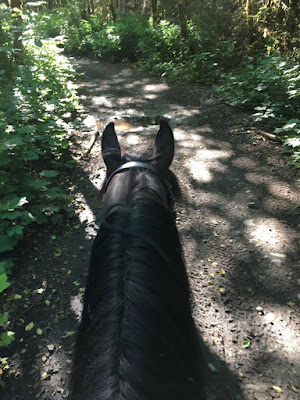 There were things to glean from the rides tho, and as always, any forward progression is still progression even if there are relapses to be had. If this mare is teaching me anything, it is about patience and persistence!

Truthfully, the rides weren't that terrible, but it felt like we still had some left-over angst from Percentage Days and what I assume was her heat-cycle fizzling out. She wasn't broncy or malicious, just very, very pissy. Especially about any kind of outside aid. Because any outside leg aid MUST mean canter. Right?

So. That was fun.

On Wednesday, I didn't have much time so just rode in the back paddock. I haven't ever ridden her back there before and there isn't much room to do more than straight lines and a little 20m circle at best. She was really interested about where Suzie was and it took a lot of effort to keep her concentration.

I kept the ride mostly walk/trot again, trying to keep her from anticipating the canter or when I would ask for the canter. I feel like it's partly my fault since I have a usual routine I do in the ring and she is starting to learn it (usually it's warm up walk, trot, then back to walk, and after walk we canter). Had some decent work, but a lot of that hoppy-ness again where she was anticipating the canter and wanting to go for it. We cantered a bit, but not much, and called it day. I was thankful Annie didn't react when Spud decided to bolt and take off galloping in the other pen - thanks dude.

The next morning I debated long and hard about riding her again, but figured I might as well work on some relaxation and trying to get our shit together. Color me surprised when Mare was pleasant and happy to go to work. We did quite a bit of cantering, especially trot-canter transitions, and she was really really good. There was one moment she anticipated and was pissy, but overall she behaved and was really focused. The trot work felt really good, and I was actually able to sit the trot without her thinking "OMG SITTING MEANS YOU ARE GONNA CANTER SOON RIGHT."

At the end of the ride in the ring, I brought her to the gate and tried to open it from her back. I've done this quite a few times, but that day she just did NOT move when I asked her. Any leg pressure and she would back up. So, I walked back to the middle of the ring and put my leg on and backed it up with a tap of the whip. Once we had that whole argument settled, I marched back to the gate and she was perfect as pie. She was rewarded with a little trail ride around the fairgrounds before I untacked her and loaded her back up to go home.

While a lot of what I outlined over the week leading up to the show was more or less "this sucked and that sucked", we did have a lot of good moments and the disagreements are just part of that growing up phase. It's frustrating, but looking back at where we started, I have to remember this horse didn't even know how to canter before I got her and cantering more than three strides? Yah, didn't happen.

Of course, with a show happening the very next day, I was worried to see what kind of issues would play out in the ring and if I had over-faced Annie in what I had signed up for.
Posted by Cathryn at 1:58 PM