I had meant to do a recap of my ride from last Tuesday, but lack of media and lack of motivation... blah blah blah. A quick rundown of the ride was that it was pleasant - we worked a lot on the canter and did a little run through of a Dressage test that was messy, but decent. All around it was a good school where we worked more on consistency and response to my cues.

The  rest of the week was pretty hectic but when I found out we wouldn't be working on Saturday like initially anticipated, I jumped at the chance to take Annie to another Percentage Days/ Clear Rounds event. For those who are unaware - it is basically a fun and low-pressure way to get young horses (and nervous riders) acclimated to the pressures of the show ring with volunteer judges and some good old fashioned fun. A lot of people go just to brush up on their schooling, or to just have fun.

I decided that before leaving on the trailer, I would dose her with some Omega Alpha Chill - not necessarily for her benefit, but for mine.

Nicole and AJ came with us, and it quickly posed as a bit of a problem. The minute AJ loaded onto the trailer, Annie went into full blown heat mode. She was pretty good about not being a complete slut, but would tense up and lose her marbles if she couldn't see AJ. I'm not sure if this attributed to her poor attitude the remainder of the day, or if she was just being a normal green horse at a bit of a hectic event.

Nicole and I opted to tie the horses on opposite sides of the trailer and I dosed Annie again with the Chill after she pawed the crap out of the side of the trailer. She was good to be tacked up and I opted to wander over to the warm up arena solo - I was curious to see how she'd react without AJ and I didn't want to start having to rely on a buddy when we go places. A death sentence? Maybe.

At the mounting block, she tried to move around but after I stern talking to, she stood quiet enough for me to mount. Nicole and her gelding weren't far behind us, but Annie was still pretty hyped up about it all. She jigged and jigged and jigged in the warm up, which was totally irritating but we worked through it and eventually got some good work. The canters were nice - at one point during a trot-canter transition she decided she was going to give a half-hearted buck so she got a spank for that and we carried on. AJ was lunged at the opposite side of the arena and I tried to avoid where he was and tried to keep Annie's attention on me by asking her to flex, bend, leg yield... just anything that would take her mind off of her buddy. Her bad lead was picked up after about three tries and we ended it there. I felt like the work I got in there at the end was really nice and felt similar to my Karen lessons.

But.
Once we left the arena without AJ, she started to get jiggy again. I gritted my teeth and contemplated asking Nicole to bring AJ over, but in the end I opted to work it out and literally just walked and walked and walked some more. We did loops and circles at the walk, not asking for much, just asking her to walk. I could feel the nervous energy bundling up and it wasn't a very good feeling, but at the same time Annie was really good about it.

After another rider had finished, it was my turn and by that time Nicole had parked AJ outside of the arena. I'm not sure if him being closer helped, but Annie and I laid down a really nice Dressage test. I mean, it wasn't fault-free, but it felt really nice. Our geometry needs work and getting her more relaxed will help put the pieces together.

I opted to do Training Level 1, since I would be showing that later in the week and wanted to get over my fear of cantering in the open arena. The only issue (which really cost us points), was her right lead canter - she actually picked it up correctly and I had thought she picked up the wrong one so I shut her down and proceeded to be unsuccessful in obtaining the lead again. Oops, sorry Bannie. 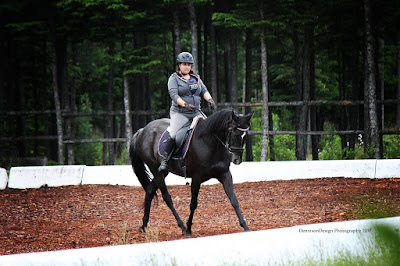 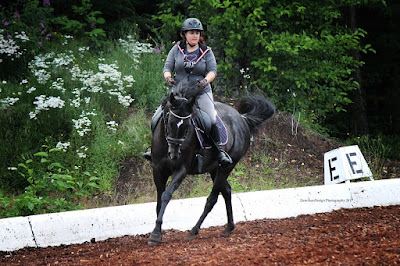 A quick chat with the judge re: the lead and she asked me to come back and enter the court and try leg yielding her into it. I don't think the judge saw she had actually picked it up, but figured hey why not try. She didn't get the lead and we ended up saying screw it and let's go for the next test since Annie was getting frustrated with me asking and then shutting her down.

My second test ran right after the first and was Training Level 2. This test felt less harmonic than the first despite us getting all of our leads. She was more tense and gave me some serious attitude in a few movements - at one point she gave a half-hearted buck and in another she did her very best "fuck you I'm a llama" impression. 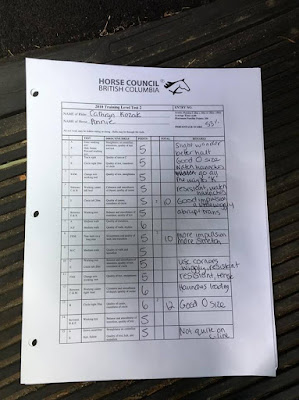 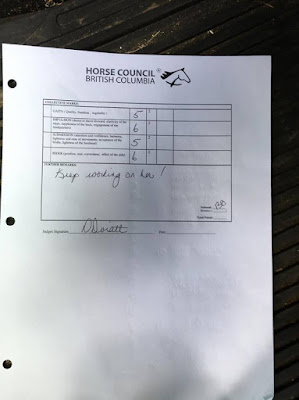 I was kind of discouraged by the behavior, because she is usually quite an agreeable mare with a "yes ma'am" attitude. I think a lot of her poor behavior was stemming from the fact it was a little chaotic, she was in heat, and she was being kinda buddy-sour. A win in this situation was that I wasn't afraid tho, which made me proud and to be fair, Annie DID do everything I asked at the right times and for the right amount of time - it was just more or less abrupt, rushy, and very hollow. I suppose the relaxation will come.

We wandered back to the trailer and I stripped Annie's tack and let her eat some hay. She was quiet and calm as I went and watched a few other people's tests and there was only one point I had to walk back over and tie her a bit shorter and give her a stern talking to for pawing again. For a mare that hasn't really been tied like that at events, I was pleased with her cooperation.

After helping the volunteers set up the jumps, I went into the ring where Annie had NO steering and not really any brakes... or cares... or anything. She kind of reverted back to how she felt when I first got her - just like a wet noodle. She did everything I asked tho - and didn't even hesitate at any of the jumps or throw in any stops. 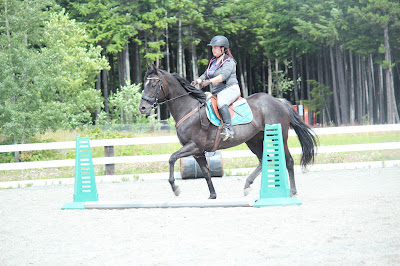 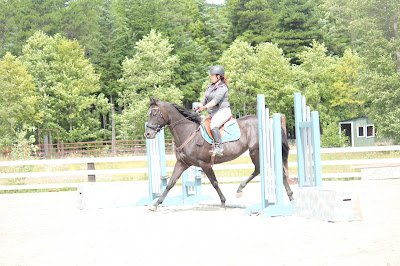 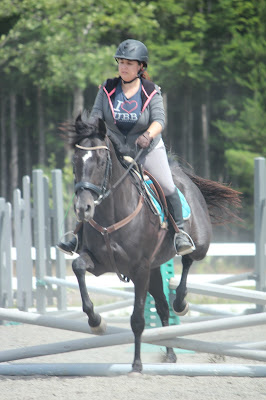 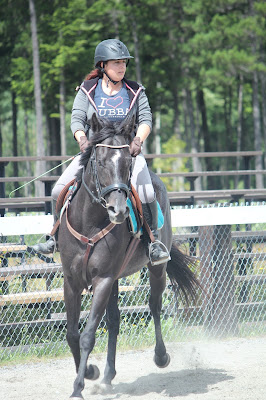 Initially, the plan was to do 4-5 rounds, but I only ended up doing three. Two trot pole rounds and one cross-rail round. Each time we did a round, I had to give her a spank with the whip to get into the arena, mostly because she didn't want to leave her friend.

The first trot pole round was really awful feeling - she ignored my aids and kinda just turned on her own and wiggled all over the place. The second trot pole round was better and I actually let her canter over some of the poles, wherein she knocked a few. The cross rail round was by far the best and I let her canter most of it. I had to really half-halt a lot tho, because her canter is not really compressible right now so she was ZOOOOMING through it. Still - pony went through it and did it all.

All in all it was a pretty good day - we had some major fail moments and some really good moments. Sometimes it is easy to get discouraged to not have the same horse at home as you do at an event, but I suppose it'll just take time. I am still pretty happy that we got to do everything I wanted to do, despite the minor theatrics.

After our third pass in the jump arena, Annie was parked outside the ring to watch a few rounds and she fell asleep. Until AJ and Nicole left back to the trailer... then Annie decided to forget I was leading her and she decided to just be overly rude and pushy. We did some in-hand work and when I asked her to yield her haunches she kicked out... so she got a spanking again. Oh, mare.

She loaded up good and hauled home just fine, even when AJ was dropped off and left.

Anyone else find more exposure makes their horse easier to deal with? Any mare-in-heat horror stories? How long did it take for your horse to get used to the chaos that is horse shows/events?
Posted by Cathryn at 10:29 PM