I debated long and hard about posting this, but I feel like it is important to have a level of transparency to the readers and also to other equestrians who may be feeling similarly. Sometimes it helps to have a familiar face going through the same thing and sometimes those experiences help us get better.

In the three days Annie had off due to her chiropractic adjustment, I busied myself with chores and taking Spud out. It was a nice little vacation, but as soon as Day 4 rolled around and I knew the mare was ready to go back to work, I sucked back at the opportunity to ride.

I mean, I still went out and rode the horse, but that sinking feeling in the pit of my stomach wouldn't budge.

I have went through a mish-mash of emotions with Annie, and while she hasn't done anything necessarily bad, I feel myself expecting the worst and fearing the worst.

My poor mental state at Percentage Days/ Clear Rounds was kind of the nail in the coffin, I guess. Ever since then, I have had mixed feelings about getting in the saddle.

To be fair though, the horse hasn't done anything wrong. I realize she was very well behaved at the event and it can only go up from here. But, my anxious personality and "what if" mantra think otherwise.

And it is frustrating, because it can be downright debilitating.

Especially when the horse hasn't done anything wrong.

The day she kicked out when I tapped her with the whip because she didn't want to go to the fairgrounds, I literally wanted to get off. My instincts screamed at me to get off, that it was going to escalate and something really bad was going to happen.

And I still pushed myself to ride, especially when I had those feelings.

And in a way, it made a huge difference when I started to accept those feelings instead of being ashamed of them and decided to experiment with what made me uncomfortable and why.

A short hack around the neighborhood wherein Annie called out twice nearly gave me a panic attack because ohmygod she's gonna bolt and slip on the pavement and we are both gonna die...

But guys. The horse is fine (Emma knows this mantra all too well, lol).

She is more than fine, actually. 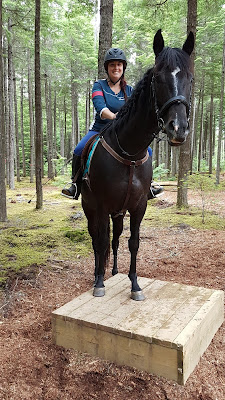 She has a head-case of a rider who makes up shit in her head to be afraid of and the horse still shows up to work and still does the thing. Yes, the horse is starting to test the boundaries, but she hasn't crossed that line. So why am I on guard all the time when I go to put a foot in the stirrup?

Trust is a difficult thing to come by, and it's kind of like a game of tug of war. Nicole said it best with her Trust Bank metaphor, and I really have delved into what it all means and how it actually plays an integral role in mine and Annie's relationship.

Right now, we are chugging along and had I wrote this post when I had truly felt the crippling effects of the fear, it probably would've had a different tune. But now, I'm starting to get over it little by little. The trust bank is building up again and my mind is starting to feels the effects of it - I'm still riding the horse and if any of my followers are on my Facebook or Instagram, you will see that I am so very much enjoying my little mare.

A lot of what helped me in kind of getting my poor PTSD-suffering brain to cope with the high anxiety situations (or what I thought was going to be high-anxiety), was to literally transform myself into someone else. For some reason I chose Charlotte Dujardin, and as I had texted Riding Buddy after I rode that day, "I told myself 'You are Charlotte Dujardin and I will NOT put up with this lolly-gagging nappiness. We have crumpets and tea and canter pirouettes to train for.'" And so, Annie was spanked and we carried on our way.

Hilarity aside, I immediately felt braver and was able to crush down the anxious feeling by literally pretending I was an Olympic Gold medalist just causally hacking around the bush on a amateur friendly baby horse. It even transformed into my riding at the arena - when I asked for things I meant it, and I found myself asking properly vs just trying to voyage my shit-canoe around the arena.

It isn't a permanent fix obviously, but it is getting better. My random bouts of fear don't just attach themselves to horses - more recently they've attached themselves to my new job and the fears associated with that. Living with anxiety is a work in progress and I feel so very fortunate to have a horse that doesn't really feed off of the emotions I project. For a baby horse who could have all the excuses in the book, she plays pretty damn fair.


tldr; I was afraid of baby horse when baby horse did nothing wrong, or did regular baby stuff. So I summoned my inner Gold Medalist Dressage Queen and did the thing.
Posted by Cathryn at 8:00 AM