Prior to the Canada Parade, I had driven Spud during one of Annie's "off" days from her chiropractic appointment. When I put her back into work, he came along for a few rides just to be ponied along.

To try and speed these "catch up" posts along, the rides I put on Annie went really well. We still had some moments where she sucked back and didn't want to go down the trail to the fairgrounds. To be fair, I had been noticing her feet had become incredibly sensitive on the rocks. I had thought I would be able to keep her barefoot, but the sensitivity started to worsen over the last week rather than resolve like it had earlier this year. We still trekked to the fairgrounds and she laid down a really nice ride for me - we still had issues with the right lead but once she got it, I let her canter on it and then ended the session there and headed back home.

Unfortunately, I did notice she had sensitivity in the arena during our ride, so I knew the whole barefoot thing was coming to an end. When we got back to the barn I decided to pack her hooves and leave her for two days to allow any kind of bruising to heal.

In the meantime, a call went out to the farrier so we could try and arrange a date and time to shoe her. With Annie never being shod before, we weren't sure if we would be able to do all four or if we'd only be able to do the two fronts - most of that would depend on how she reacted to the smoke and nailing of the nails.

I also booked some riding lessons with instructor K. I have blogged about her a few times before, and have also blogged about a lesson I had with Annie back in February. K is not from the area, but works out of a barn in the next town. I was eager to get some lessons with her, having felt a little lost in my training exercises and the whole "where to go from here" and just how much pressure I could put on Annie. With the whole head-case problems, I also needed a bit of a confidence boost, and lessons would be the sure-fired way to go to achieve that.

Anyways, back to Spud (the real reason you guys are reading this post).

I wanted to take him in the parade again this year, to continue his bomb-proofing education and because he's so fucking cute he deserves to be in a parade. Initially, my grandma was supposed to join me in the cart but we literally got poured on so the Boyfriend ended up sitting in his truck with my grandma and just watching the parade.

Spud was certainly loads better than last year. All the random outings we go on have really prepared him for the chaos. We did have a small blip where I had to literally jump out of the cart due to a float beside us in the parking lot firing up the american muscle car on the flat deck and revving it... Poor Spud couldn't see due to his blinders and spooked HARD when the car revved. Due to the fact there wasn't much room, I opted to jump out of the cart and hold onto his head to prevent any accidental maiming.

After that, he was antsy to go, but was still good. For the actual parade portion, he was AMAZING. I barely touched the reins, as he seemed to understand when the float ahead of us stopped, he needed to stop as well.

As usual, a lot of people from the community recognized him and one of his neighbors from where he is boarded called out after me asking if he wanted to partake in a kid's birthday party in a few weeks. My pony, you guys, he is famous. 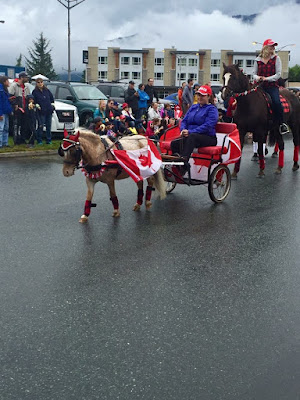 After the parade was finished, I had to drive him back to the trailer at the starting point and we did some cantering and trotting. He decided that when I asked him to canter on a second stretch of grass, it meant he needed to buck like a little asshole, so a bucking strap is sitting in my shopping cart. He hasn't offered to buck before, but I figure I might as well get the little strap and prevent any scary situations from developing. He did stop after I yelled at him and carried on like the good little lad he is.

All in all it was a really great outing and I feel like this guy is getting more and more okay with all my crazy shenanigans. Parades are always fun, but they are certainly more fun when your horse is relaxed and enjoying themselves as well.
Posted by Cathryn at 8:00 AM