Since returning from vacation, I've lunged Annie a few times and ridden a few times. Most of last week was spent stringing up electric fencing so we could turn the horses out in the back paddock (finally!).

And now since that has been completed, I have been able to put a few rides onto the mare and at first, I felt kind of hopeless in a sense, because she reverted back to #drunkdolphin status. The good news is that with each ride I put on her, it feels like she is starting to get back to where she was before I left.

The trail riding has gotten progressively better - she hasn't jigged at all and moseys quietly along which is really nice to see. During a short trail ride around the fairgrounds after a school, she followed quietly behind AJ (typically she tries to wrestle herself ahead of whoever the lead horse is). We even cantered down a stretch of trail, which was a lot of fun!

I have slowly been introducing the neck stretcher into our lunging regime, and Annie is not quite sure what to make of it. Her first introduction commenced A LOT of chomping and worried eyes - so we will just continue to plug away at it and see how it goes. We had a bit of a frustrating lunging school where she wouldn't pick up her right lead and ended up swinging her haunches to the outside and just halting whenever I asked. I managed to get after her and have her canter on the wrong lead since she started to get pissy with me asking her to canter a million times. The lunge probably didn't set us up for the best ride, but it was still pretty decent despite some minor hiccups. 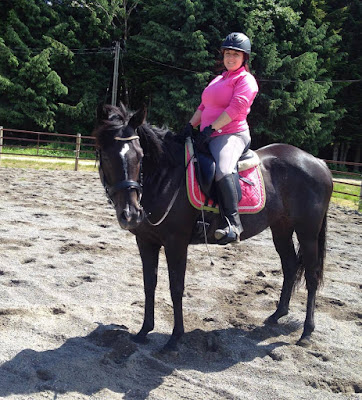 Even while riding, the right lead is still painfully elusive and it sometimes is really good on the lunge and sometimes (like today) it completely disappears. I have been playing around with different approaches to see what works, and I haven't been able to find a concrete solution yet.

Despite this, we completed our entire school this afternoon in an unfenced area and it was really lovely (aside from when Annie got pissy when I put my outside leg on during the canter and bucked). The bucks themselves just felt like sassiness as I was manipulating her and hopefully they will fizzle out as she learns to use her body WITH me vs against me.

But still, we are plugging away at a lot of things, including the fly spray and random little things like standing quietly in the arena for 20 minutes while mom talks to friends.

She feels better, but I think this right lead issue is going to be our biggest hurdle. From what I have been told, it isn't uncommon for greenies to have this issue. Anyone else have experience with this? Helpful tips/ ideas? I am booked into a clinic next month so if we haven't figured it out by then, hopefully we can get some professional help. Before the short riding break, we had more success getting the lead as she got stronger, but I worry that I am ruining her or causing more harm than good by "giving up" on that lead and going back to other schooling? I just didn't see the point in attempting and re-attempting the lead when we weren't getting anywhere, even with the little tricks I've been taught.