The Trailer of Death No More

As the title alludes, we have had some major break-throughs in the whole trailering business. I do feel like a large portion of the success attributes to the new attitude I took towards the entire debacle.

In my last post, I was pretty somber and down-beaten, which is understandable but not necessarily helpful. I was reaching a plateau with Annie - asking her to get into the trailer nicely and babying her each step she went in was not working, as evidenced by the fact she refused to even step from the ramp to the trailer during a 30minute session on Wednesday last week.

I reached out to a few friends and a mentor and found that my issue may be stemming from the fact that I needed to up the pressure a bit more and instead of just asking and asking and asking, I needed to start telling. I had a gut-feeling that the whole regression in the trailer loading was not only Annie being hesitant, but also testings me.

As we all know, horses are incredibly intelligent and I had a feeling that Annie had figured it all out and "had my number" without me even realizing it.

So armed with some knowledge, I headed out on Friday prior to driving out to the horse show I would be volunteering at and went in with an open mind and determination.

For those curious as to how I achieved my results, I essentially needed a way to continue forward pressure on the halter BUT I also needed to be in a driving position (ie. near her hind end). I thought about getting a helper for the exercise, but figured attempting it on my own wouldn't be the worst thing I have ever done and most of the time I load alone anyways.

As far as equipment, all I needed was the rope halter, a lunge line, and a dressage whip.

Essentially, the idea was to run the lunge line through the trailer (I ran it under the divider and back out the opposite stall) so I was able to stand on the ramp. The dressage whip was used solely as an extension of my arm and a driving aid to get her to go forward. The aim was, obviously, to have her go forwards and as soon as she went forwards I would stop driving, let the halter loose and praise her.

The first 20-30 seconds of me asking her to go forwards commenced some serious dancing at the bottom of the ramp and her attempting to turn and remove herself from the forwards pressure on her poll. Instead of giving her the baby voice I normally do, I sternly told her to "walk on", gave her bottom a tap with the whip, and what do you know, she did.

Her mind was pretty blown over this newfound confidence I seemed to have and after a few repeats of installing this forward motion up the ramp, I pushed her more to step onto the trailer. And much to my surprise, she LOADED FULLY.

And not only did she fully load, but she let me rub her neck, belly, haunches, etc and waited for me to back her out.

As much as people will tell me that I should've stopped there, I praised the crap out of her and continued asking her to load and unload. She was still kind of antsy coming out of the trailer and yanked me down the ramp a few times, but I corrected her simply reloading her and asking her to back up and stop randomly down the ramp. Any time her head went up and she made the motion that she was going to launch down the ramp, I growled at her and put pressure on the halter to ask her to lower her poll.

We continued with the progress we had made on Saturday when I got home from the show and I was really, really happy with her. I opted to use her regular leadrope vs the lunge line and she was really good about self-loading. We got to the point where I closed all the doors except for the hay-manger door so she could look out still.

And on Sunday, I brought the Boy out with me and we loaded Spud and Annie and went for a little drive around the street. She was a bit sticky about loading, but resigned and loaded up just fine and let me do up the butt bar and the doors before tying her with the safe t tie ring.

The drive was uneventful, she moved around a bit for the first few seconds and then settled and I couldn't feel either horse shifting around at all. We did a lot of full stops and at one point, pulled over and stayed parked for a few minutes for the Boy to check the trailer plug.

When we arrived back, she unloaded fast, so we worked on that again and we did a few more loading and unloadings just to reinstill that she must load even if we literally JUST got home. 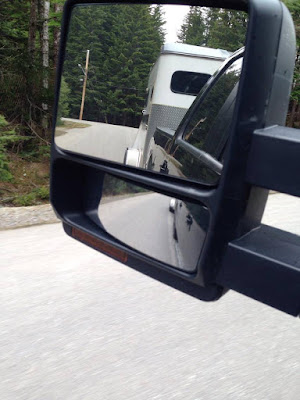 I wouldn't say that we are 100% road worthy yet, but I feel like I can haul her to a clinic or show now without a fuss. I feel like she may challenge me again down the road about getting on, but for now this is a HUGE accomplishment and I will relish in our well-deserved pats on the back :).
Posted by Cathryn at 9:45 PM