As evidenced by my last post, Annie was a bit shocked to see a ''change'' in the rules, especially when it came to the likes of trailer loading. I don't necessarily like to think it is a complete 180 change from where we were before, but it is more like upping the expectations and pressure. We are slowly but surely figuring eachother out and slowly forming a partnership (I realized I put the word ''slowly'' in the same sentence twice, but I feel like it needs to be reinstated that any forward movement is slllloooowww).

Since I was busy with all the trailer loading stuff and helping out at a show all weekend, I wasn't able to hop into Annie until Monday morning. The Chiro was coming out later in the morning and because I figured Annie would need a few days off after being adjusted, I wanted to ride her prior to the appointment itself.
< 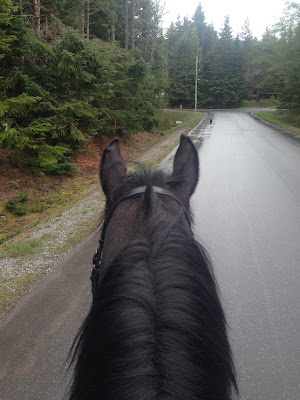 Things started out OK - she tied quietly altho was a bit dancey when I threw her saddle pad and saddle on. She didn't really play up the antics, just wanted to move her feet around a bit. I had put my jumping saddle on, as I had left the trial saddle at home with my dressage leathers and irons.

Once she was all tacked up and I was ready to motor, we wandered over to the mounting block (ie a bucket) and instead of letting her wander away and just quietly following her wherever she went, I start to incorporate the ''new rules''. Before, I had let her move away but quietly just followed and mounted wherever she stopped.

But now, I had changed the rules and was keen on having her stand still regardless of what I was doing or where we were. I think it came as a shock to her because she seemed pretty offended by this new set of rules - but it took less than five minutes for her to just stand quiet as I mounted and dismounted several times.

﻿
Off we went for a little hack around the neighborhood wherein she was verrrry forward, as she often is when we first head out. I reminded myself to keep my leg on during times where she felt tense and flighty and to encorporate half halts into the ride as well. The half-halts really did help, but it kind of came unglued when I attempted to add leg-yielding in and she just could NOT leg yield off of my left leg. It grew into her completely ignoring my left leg and shooting forwards, so I decided instead of firing her up on the roads, we'd head home and work on it some more.


We got back to the barn and I worked with her in the front paddock that has no fencing - so it is just an open space of green. I had only lunged her back there once or twice and she seemed concerned we were riding back there. The resistance to my left leg continued and I actually hopped off to do some in hand work because she was just NOT getting it. When I was in the saddle, she was flinging her head and just being a cow about it. The TOF and TOH we practiced were really bad as well - she kept getting stuck going to the right (off my left leg) and would just lock up her entire body. The in-hand stuff went OK - she started out ignoring my whip poking her side but reluctantly started to listen.

I went to pop back on and she started moving away again so we worked on the mounting stuff once more. I got back on and she felt very fired up from our discussion on the ground re: moving off my leg. She also started to suck towards the barn and on a particular circle, she bowed towards the barn and I gave her a sharp kick with my leg. She responded by throwing her head down and giving a half-hearted buck. I responded with another kick and she repeated the offence. I stopped her, jumped off and immediately went to the barn for the lunge line.

I have no problems with antics undersaddle - I just prefer to deal with shenanigans like that in an enclosed area where it is a little more safer.


Annie got Bad Pony Lunged for a solid 10-15 minutes wherein she attempted to flee to the barn once and was shut down quite firmly. After the lunging, I hopped back on (without any wiggles during the mounting process) and rode her around the area at a walk, ensuring she was listening to my aids. She kept popping into a jog but I felt like that was more due to her nerves rather than being bad. We settled at the walk and she was just fine turning away from the barn and towards the barn.


We did a few laps of trot where she was good and I felt like she responded better because I was using my calves vs my heels like I had been before. I feel like I ride with my heels more in my jump saddle and maybe it pissed her off that I used such a loud aid vs a quieter one like I normally do?

Regardless, there was no need for snobbyness, hence the Bad Pony Lunging.


We also did a TOF both directions and she was SUPER good. I was pleased and hopped off right then and there, solidifying that she had answered the question just right.


So, not the best ride we have had. But, I think in some ways it was an important ride to have.

While I think I could have stayed on and fought it out with her, I didn't really feel like it was the place or time for a head to head battle. I was getting frustrated with her being pissy about something so simple and hopping off to grab the lunge line was the better option in the end.

And she is starting to learn that when I ask for things, she needs to comply somehow. She doesn't need to make a complete TOF or TOH - just make the attempt and I'll be happy. I also think doing these tricky exercises with a fence rail will help since doing TOF and TOH out in the open is a bit harder of a concept for a green horse to grasp.

﻿
Still, we will keep plugging away at it piece by piece. For now, asking smaller sections of the question might be necessary for her to truly grasp what I am trying to get her to do.


As for the chiro appointment, I was really, really happy with how she acted (I mean, it could also have been because she was tired lol). She let the chiro assess her, touch her all over, and adjust her as necessary. She was out in a bunch of places, but most signifigantly were her left haunches and left shoulder. 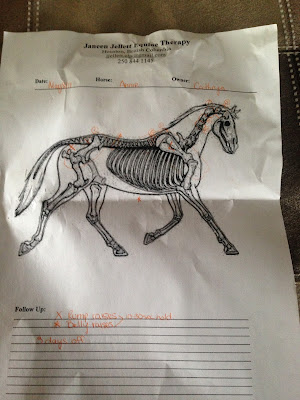 I had mentioned how our ride went and that Annie was really terrible about getting off of my left leg, especially instances were my left leg was the inside leg (so think of her bending her right ribcage around a circle). Chiro had said that she was higher on the one hip, which was causing her less leg mobility behind and it would be more evidenced in a circle. She also gleaned that our right lead issue is probably stemming from the locked up left hip as Annie was compensating on her left shoulder quite a bit. So the whole left sided-foulness may have been due to pain, or it may not have. Chiro said to give her three days off and see if things have improved.

Fingers crossed she is feeling more limber and loosened up!
Posted by Cathryn at 2:39 PM