The Week That Was

Alternate titles: When you are Too Lazy to Post Everday and also Too Much to Say, Too Little Time.


Things continue to plug along and for the most part, Annie is making very slight (yet rewarding) advances into her role of becoming an Amateur Friendly mount. Over the last few months, Horse Show Buddy (HSB) and I have been talking about our young horses (HSB has a 3 year old who was just started a month ago), and I find myself so excited and exuberant for the future.  We’ve been chatting about the similarities in Annie and her 3 year old, Riott, and it’s really interesting to see where they line up and where they don’t. Being older, you’d think Annie would automatically be ahead of the pack, but as I have said in previous posts, I’m starting to see that age is just a number. Of course, both horses are quite different not just in age, but breed, build, and temperament, but still interesting nonetheless.

The past week and a bit we have been alternating between hacking, schooling in the arena, lunging, trailer loading practice, and ground work. I don’t particularily like to squeeze everything in one day, simply because #babybrain. I also don’t think that repeating the same thing every day is necessarily useful in all applications, so I’ve given her days off to ‘’absorb’’ the information from the previous session (this particular method comes from the Stacey Westfall series and I have found it to be really helpful).


Now onto what we’ve been up to since Easter Monday (17th) :

No Pony Day. I did school work and house work. My package from Riding Warehouse arrived tho, so score!

Spud was given the serious duty of carrying my lunging gear (among other items), ponying Annie, and acting as Chaperone Pony as we made our way to the outdoor arena to lunge. One of my goals for this month was to get some lunging in, and while I am not particularily fond of over-doing the whole lunging thing, I am feeling more and more like is going to help strengthen Annie’s hind-end weakness (see : still growing baby body + lack of muscles = weak baby horse) and help her get that sticky right lead without the issue of a rider on her back.


Everything went as well as it could – I learned that Annie doesn’t really understand the concept of lunging (I am assuming she was round-penned, which is typical of young horses) but we made some good strides despite her not really wanting to, yanno, work. I’m pretty sure I got more of a work-out than she did, which is fine.

The evasive right lead was still weirdly sticky for her, and I ended up contacting a chiro who will be in the area relatively soon. If she is still having issues on the lunge, I suspect her body is sore from using all these muscles she’s not familiar with. 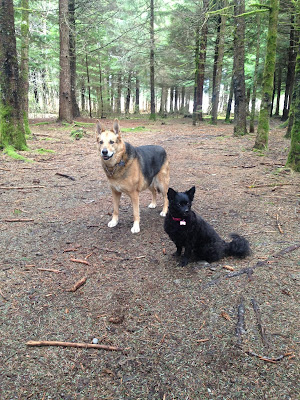 Shin splints flair up which left me tensor-bandging my legs and hobbling outside to walk the dogs. 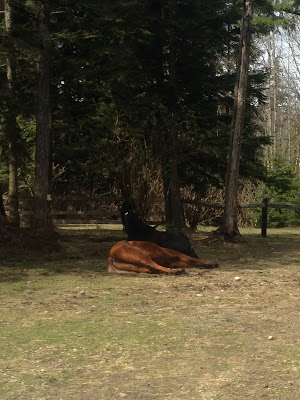 I found Annie laying in the paddock with Suzie, which was super adorable. Suzie got up ASAP because ‘’You here to give me grains, human?’’ but Annie stayed down and let me pet her, which I thought was super cool.


We practiced loading again after I had given Suzie and Spud a bath, with Annie tied quietly as I worked with the other two.


It was another step in the right direction, and Annie inched in closer than previously! Success.

BF and I helped the MIL with some Spring cleaning on her property – lots of alders were cut and taken to the dump! It was an all day extravaganza. We also pumped water out of our property all day to prep the giant swimming pool for more dirt.

Continued to pump water out of the lot but was able to end the day with the horses! We worked on lunging as well as trailer loading again.


The lunging went really well and she was good about her sticky lead – she cross-fired a few times but more often than that, she goth her leads. We also did some work on yielding the haunches and some in hand work. You know, the boring stuff! 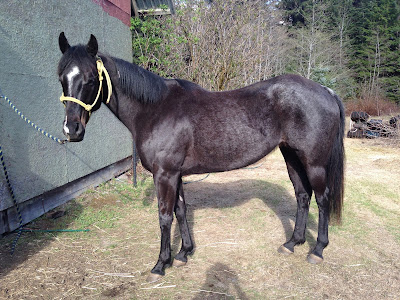 Trailer loading went well, I actually used Suzie this time instead of Spud because he wasn’t at the barn doors when I went to go catch him and I was being lazy.


Suz was great – stood quiet and let us do our thing. We played around with self-loading stuff and Annie was good, altho hesitant. Another inch towards success though! 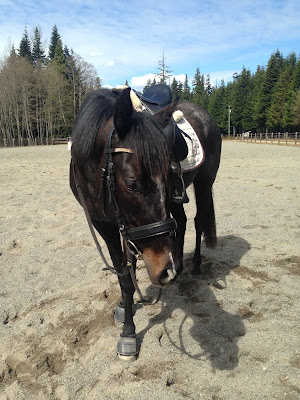 The sun was shining and the weather was WARM so I headed out to ride, with plans of heading to the grounds. I rode in my Dressage saddle for the first time in foreverrr and after watching the video of myself, I listed my saddle for sale again. It just does NOT fit me. So, anyone looking for a 17.5’’ Bates Innova, hit me up and I’ll give you a good deal!


The ride itself was great – we finally got some semblence of rythmn at the trot and her halts are really wonderful. Of course, our geometry leaves much to be desired at the moment (our 20m circles are really 36.8m pie-shaped ovals) and the contact isn’t where I’d obviously like it, but we are continuing in a steady stream ahead and each ride and each session gets better and better.

The videos are a bit hard for me to look at because there are some serious glaring faults, but I feel like this will be good media to look back on as we progress.


Her canter is starting to come along – she was having some issues in the sand in the arena (it was moderately deep) and I could really feel how weak she was in her hind end. Her engine kept dying out (see video), especially during the arcs of the circles where she was trying to just motorbike it and I was like ‘’We have to turn properly so we don’t die.’’ and her body was just like, ‘’That’s HARD work, lady.’’

We did get her sticky lead a few times, but I still booked the chiro to do a work up on her.


After I hosed her off, which she was also great for!


We did some ground-work in the back paddock – pivoting, yielding to pressure, lowering her poll with just vocal commands, picking up and stretching her legs forwards and backwards.

In our loading session there is not much to report. but Spud was Chaperone Pony again and we did the beet pulp in the bucket exercise. I moved the bucket little by little down the trailer aisle and she would come in, eat, and stay until I backed her out and repeated. Annie did give me a huge moment when she loaded all four feet into the trailer and stood quietly so I could back her out.


She has this weird, almost funny, reaction with the trailer when she overcomes another hurdle to successful loading – she reverts back to being uncertain again. For example, once she loaded all four feet and was unloaded, she was like, ‘’I did the scary thing, I’m done for the day.’’ 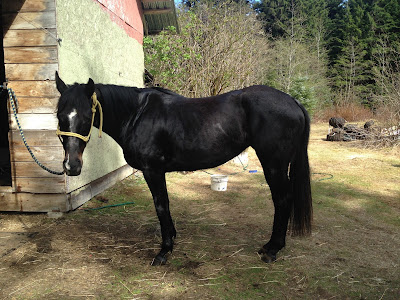 I kept working her, and we ended on a good note so that she realizes she doesn’t get to say when she wants/doesn’t want to load. But also, I didn’t push her to repeat her huge milestone – just because we are working with the trailer doesn’t necessarily mean she will need to load fully and that was the message I wanted to convey.


We headed back to the barn and I introduced her to the clippers – ran them all over her body, legs, head, and even clipped a few hairs on her chest. She was uncertain, but good and stood after she realized she wasn’t going to die.


I look back at where we started from, not just in regards to riding, but handling and everything that goes along with it, and I can’t help but feel excited. We haven’t done a lot of riding just yet, but we’re gearing up and slowly but surely my time is being able to be managed a bit more. With doing self-care at the barn, it can be tough to have the motivation to ride after doing chores, especially when the riding arena is a 20min hack each way.

I feel like right now this on the ground stuff is our main focus. Not to say that I don’t want to or don’t enjoy riding her – because holy shit I am having SO much fun riding her! But I make a plan on what I want to work on, I often hear myself thinking ‘’trailer’’ or ‘’fly spray’’ or ‘’lunging’’ because all of these exercises will transfer into the saddle.
This whole ‘’Bringing Up Greenie’’ thing is exciting, terrifying, and rewarding. I admit I’ve made mistakes with her (ie. Trailering) but I am working tirelessly to fix them and I have hope that we will make it. There is a schooling show next weekend that I had planned to go to, but for now we will sit out (although I am still going to help and cheer on HSB!). And I’m not even that disappointed about it – we will get there when we get there. Having a trailer is a crucial part of where I live, especially for things like lessons, but for now I think plugging along the only way we know how isn’t so bad of an option.
Posted by Cathryn at 7:43 PM