I've put off blogging about it, but I feel like this is an important thing to write about and document, as terrible as it is.

Learning lessons - horses are full of them.

This past Sunday, I had planned to trailer Annie over to the next town's indoor arena to ride. Suffice to say, things did not go to plan.

I'll cut to the chase and say that Annie loaded up just fine, but then literally doubled backwards and dragged me out of the straight-haul. She seemed frazzled and tense, but I didn't really play into her shit and loaded her back up two more times wherein she shot out backwards like the trailer had somehow grown teeth and bitten her.

It was uncharacteristic of her, as she had never pulled this stunt before.... And this is where I should've stopped.

This is where I should've realized a deadline didn't matter. 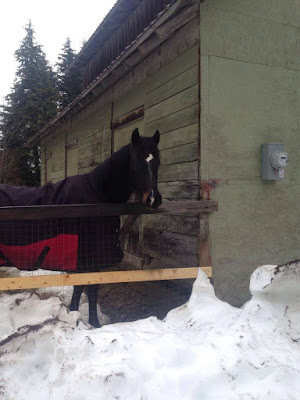 Instead, I loaded her back up again, a little annoyed and frustrated for her being so stupid about loading into the trailer. I  patted her neck before slipping out the escape door and tying her near the hay-bag I had sitting in the front manger. I observed her quietly and wandered over to go shut the back doors and do up the butt bar.

I hadn't even made it to the back of the trailer when Annie shot back and hit the end of her leadrope.

I watched helplessly as she thrashed at the end of her halter. She had used the long tie I had left for her to her advantage and both hind legs were dancing near the ramp. She was heaving hard, legs flailing and slipping. She even bashed her skull off one of the sidewalls.

I haven't witnessed anything like that in my life, so it was exceptionally violent and horrifying to watch. I jumped to the front door and attempted to undo the quick release knot, but she had pulled it so tight it wouldn't budge (FYI the leadrope is still stuck in the trailer).

The next few minutes seemed to drag on as I darted around the trailer, trying to figure out if I had a knife big enough and sharp enough to cut through the leadrope (I didn't). And I even debated running onto the road to call a friend (no service), but stayed with Annie for fear of her slipping and falling onto her sides - not that I would've been able to do anything if that had happened.

I just watched, waiting for her to stop so I could help her. With all the thrashing, my truck bounced and rolled back with the weight of her body slamming back and forth.

It felt like hours, but she finally stood, still pulling back as hard as she could on the halter. I attempted to tug her forwards so I could undo the halter snap, but it was so taut that I couldn't budge the clip. I couldn't even undo the rope halter from above her ears - to be fair, I avoided getting too close in case she decided to thrash around again.

And like fate would have it, as soon as I stood back to think, she started to thrash again.

At the end of this fit, she was breathing heavily and I realized the rope halter was pressing very hard under her throat. She started to weave back and forth, her four legs on the ramp of the trailer, and I realized very quickly that she was (probably) going to faint.

I ran to her haunches and without even thinking, pushed her hind-end as hard as I could in an attempt to get her to relieve the pressure under her jaw. I don't know if she was going to actually faint, or if she was just really tired, but I wasn't sure what would happen if I let her stay like that with the rope taut. Luckily, she staggered forwards, heaving big gulps of air. I ran to the escape door and tugged her forwards before she knew what I was doing, and unclipped her.

Both of us stood there, quivering with a rush of anxiety. She was heaving hard, her eyes wide and glassed over. I looked down at her legs and saw blood beginning to dribble down her hinds. I patted her neck, stroking my hand across her shaking body, telling her she was such a good girl and I was sorry.

I walked away from the trailer with acid in my throat and a painful knot wrenching in my stomach. Once back at the barn, as calmly as I could, I assessed her entire body and found the damage to be in large quantity but thankfully superficial. Most of the wounds tarnished her hind-left, but were also found on her face and hind-right. 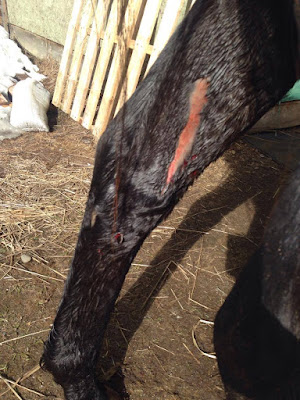 I tied her without saying a word and began to mix up some bute. As I offered it to her, and watched her eat, I sat on the ledge of the stall door and cried. Hard.

As bad as this sounds, I couldn't stand being at the barn for a second longer. My phone was out of service and I was unable to reach anyone that could come out and give me some moral support. I felt like I was going to vomit. My heart was still thudding hard and my hands felt cold and clammy despite the rising heat along the nape of my neck.

Doctoring an injured (albeit mildly) horse, was not going to happen.

So I finished assessing her, made sure she had her bute, and turned her back into the paddock before calling the boyfriend on the drive home.

As I arrived home, the Boy greeted me and I collapsed into his arms in a mess of frustration, anger, and embarrassment. When I had righted myself (and he agreed to go back to the barn with me), we headed back out to doctor Annie up. He drove, mostly because I was shaking and the feeling in my stomach kept doing flips like a dolphin at SeaWorld. We didn't even unhook the trailer.

Annie seemed pleased to see us when we arrived and I pulled her out and tied her. She danced and fidgeted, unable to calm herself. No doubt, she had a terrifying morning and was beyond the point of being riled up. The Boy ended up having to hold her because she kept dancing away from me, and at one point, into me (which knocked me onto my butt on the ground).

She was cold-hosed, medicated and wrapped where a few of the wounds were a little deeper before being released back into the paddock.

I'm not huge on stall-rest, unless it's really needed, but felt movement would be the best thing for keeping any swelling at bay.

That day, I cried and told myself I was going to sell her. Not because she is a bad horse, but because I'm scared of ruining her.

The unfortunate thing is that I've already ruined her. And I'm ashamed to admit I don't know what to do from here.

So I called a friend and teacher - one of my old 4-H leaders for advice. I admitted how foolish and stupid I had been, and how embarrassed I was about the entire situation. Apparently, 4-h leader has "been there". In that moment, my shot self-confidence didn't feel too poorly.

She gave me a good game plan to work on, and we've already started.

As far as I am concerned, Annie is now restarting her trailer training. We have no pressing deadlines, nowhere to be, and we will work on this as long as it takes her. The idea is similar to the one Emma spoke about for her guy - one step at a time (literally), lots of treats, and ending before she gets to that "bolting" point.

I hauled the trailer out this morning, keen on giving Annie some confidence in me (and my trailer) back. She was quite worried as I walked her over, but I kept the leadrope slack and let her choose to join me, or not. We paused once or twice for her to look at the trailer when she halted - this isn't going to be a "force" thing, she is the one who decides when she is ready.

We made it up to the trailer, and I walked up into it. Much to my surprise, she followed on a completely loose lead and stepped a tentative hoof up onto the ramp. She quivered, uncertain what to do next so I fed her a treat, asked her to back off, and repeated.

Our "Trailer Dance" is something like:
At one point, she refused to step onto the ramp, so I just waited and she threw her head down and really sniiiiiiffed the ramp before putting a hoof onto it. I actually laughed.

And as we moved onto her two fronts coming closer to the trailer, I gave a little tug on the leadrope to see if she would come closer. She stiffened immediately and went to pull back (usually what she does before she bolts backwards), but I loosened the leadrope, told her to whoa and fed her more treats. She chose to stand quiet and I backed her off the ramp.

Our little shuffle didn't result into any miraculous trailer loading - she really only put her two fronts on the ramp.

And what gives me hope is when she stood with her fronts on the trailer and I clucked at her, cooing her to come closer, she stiffened and craned her neck before very tentatively, inched her way fowards. Her front right stepped right where the ramp meets the trailer and I very quickly praised her, backed her off and fed her tons of treats.

I decided to end it there - she really wanted to back-pedal when I asked her to come closer but instead chose to face her fears. That is more than I can ask for.

The boyfriend had also recommended investing in some panic snaps (or quick release snaps) to prevent this very situation.

My pride is still hurt and I am upset I put Annie in that situation and that things ended very, very poorly. It may not be one of my proudest moments, but it was a learning curve and thankfully no one was too seriously hurt. For the matter of confidence and trust, Annie is going to need time to trust me again and I think I'm OK with that.

We'll chip away at it, together.
Posted by Cathryn at 7:00 AM