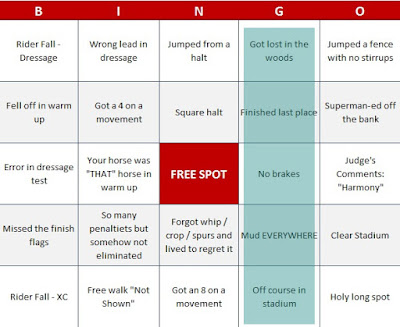 This past weekend, Spud and I had a show - I haven't talked about it and have avoided blogging because it was a complete and utter disaster.

While most of my followers know that Spud and I have had a successful driving career thus far, I decided to switch gears and attempt eventing with him. I feel like getting him well-rounded in plenty of divisions and disciplines is the best thing for him.

From this unfortunate event tho, we may just stick to driving....

Everything started out really well, we arrived on time, got him bathed and braided and ready for Dressage the next morning. 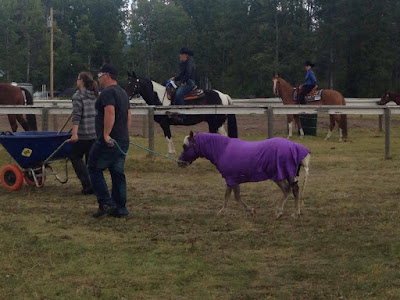 All was well when we had tucked into the camper for the night - it was even a bit humid out so the BF and I left some of the camper windows cracked open for air-flow. It was nice until about 2am when a torrential downpour awoke us.

BF rolled back to bed, but my heart sank thinking of all the flooding that no doubt would be occuring from the downpour. I hoped that it wouldn't last long and managed to roll over and fall asleep for another hour or so before waking up to feed.

Most of the facility managed to be rain-free, save for the dressage court that apparently was sloped wrong when it was made. It literally held in mud and I watched as a volunteer in her gumboots got her boot sucked right off while walking across.

I gulped and went to get Spud ready.

I didn't even warm him up because he's pretty awesome with the fancy stuff, so we waited for the bell to ring and I hopped on and away we went.

And I'm really proud to say Dressage went SO well. Thank god he's a driving pony because I didn't even have to use my reins - he just listened to me whisper commands.

Downside was we got SUPER DISGUSTINGLY MUDDY. 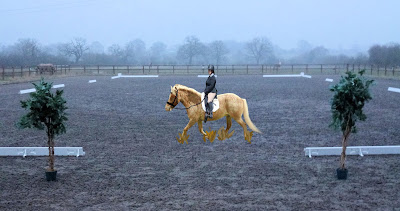 I kept checking the scores after Dressage, and we were in the lead!! We had a fantastic ride and the judge really liked how well I fit him.

Next up was stadium, and I don't have any pictures from it because the boyfriend was in the line-up getting Spud a hot dog (gotta keep the pony happy you know).

But this is where things started to go bad.

Spud did one of these in front of a swedish oxer: 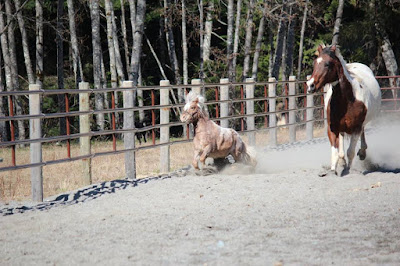 And as I exited the class, I learned that we weren't even supposed to jump the swedish oxer - it was just in there for the next division.

I ignored the fact he was being bad, mostly because we have never jumped together before so attributed it to his greenness (no kidding).

Because this was a one-day event, we were able to roll into XC right around 3pm. I was pretty happy with my time since that meant we could head home early.

The unfortunate thing about XC was that... uh.... 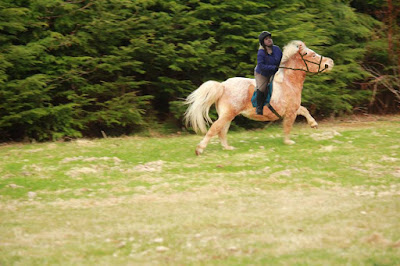 We literally had NO fucking brakes!

I ended up getting lost because Spud wouldn't stop and we flew by three jumps that we were SUPPOSED to jump. I ended up just letting him gallop home because he literally locked his neck and just went.

So I guess next time I'll use a gag?

Suffice to say, we did not hold onto our first place after Dressage.

We came in dead last and didn't even get a ribbon. It was awkward tho because the division only had three people... so I guess that's how bad we were. Maybe we will just stick to Driving?
Posted by Cathryn at 7:33 PM