When I last wrote about Annie, it wasn’t super positive (aside from the fantastic trailer loading session). I was delving deep into my own inward battle with anxiety and nerves - which, according to almost everyone I whined to about, is totally and completely normal (who knew?).

In an effort to triumph over the newfound feelings, I booked a lesson with Trainer K who is a resident trainer at Barn C. Some blog-followers may remember the lesson I took on Suzie with Trainer K back in the summer of 2015. Trainer K isn’t new to me by any means – I used to be quite a regular student back in the days of 4-H when I rode a calm and sedated Palomino and afterwards, a fiery chestnut gelding.

Unfortunately, the lessons came to a halt due to a multitude of reasons – the primary reason being that I was freshly graduated and pretty much broke. Riding by any means was already a luxury and lessons were icing on the cake, so suffice to say they didn’t occur much.

But now, with the ability to trailer anywhere anytime and a bit more of an open pocket book (although it certainly isn’t much!) I find myself in a position to start rejoining the masses and getting some appropriate instruction. For a horse like Suzie, occasional lessons were just fine since she was already very broke in the riding aspect. For a horse like Annie, I’m a bit of a fish out of water, so I figured getting the additional guidance and hand-holding would be more than beneficial to both of us.

And so, I booked a lesson for Sunday. 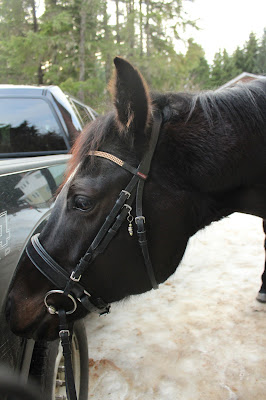 The intention was to lunge and/or ride sometime before the lesson, since I hadn’t yanno, cantered Annie since the last time I was at Barn C (over two weeks ago…). But the weather turned grim and it actually snowed on Friday afternoon and overnight into Saturday morning. I figured I would have to cancel, and some part of me was almost happy that I wouldn’t be able to go to the lesson. Partly due to the fear of embarrassment and partly due to anxiety.

The weather improved greatly over Saturday and on Sunday morning I woke up to make the call if I was going to haul or not. I actually had already typed out a “Let’s re-shedule” message to Trainer K but for some reason decided not to send it, and ended up pulling on my breeches and going to hitch up the trailer.

Fortune favors the bold and if worse came to worse, I could just lunge her in lieu of riding if it was that bad.

I got to the barn about an hour or so before I wanted to actually hit the road because I wasn’t too sure how Annie was going to load, and also because I couldn’t stand in the house anymore feeling my nerves bundle up.
Everything was loaded up and ready to go – except Annie. Because for some fucking reason she decided to balk, hesitate, and just downright refuse to load. I literally tried everything to get her on: baby talking, growling, ground-work, yelling, soft petting, cooing, spanking, treat offerings, hay offerings, opening the middle divider to make the trailer “bigger looking”, opening the escape doors and side doors to increase the amount of light in the trailer, and so on.

I literally was ready to call up a friend to see if she could help me load, but instead I shifted from the mindset of, “We are going to MISS the lesson!!!11!” to “I got all day, bitch.” So I parked my butt in the trailer, out of the rain, and waited.

We sat at this stale-mate for several long minutes wherein neither gave an inch and neither offered to fold the cards they held. I spoke to Annie in a soft voice and she randomly decided to clamber on, which took me by surprise. I tied her up, closed the doors and got into the truck. I still had over an hour to drive to my lesson and the roads were clear – do I still go, or do I just go for a short drive around the block and put Annie back as a reward?

Fuck that, we’re going to the lesson.

At the Barn, Annie unloaded well and was good when I left her in one of the vacant stalls while I got all my tack and things ready. She ate some hay and snorted as she stared out at the other stabled horses. She was also great to saddle and tack up in the stall – a bit wiggly but nothing crazy.

I had opted to lunge her in the arena prior to my lesson and this Big Green Monster I painted her to be was nowhere to be seen as I literally chased her around the arena to canter. I spent a grand-total of maybe 10 minutes lunging her (most of it was me running) before climbing on. She felt good, but tense. We did a lot of walking while we waited for Trainer K, as I didn’t want to do too much because Annie isn’t fit yet and I didn’t want to waste her energy before the lesson.

There was one moment where she took great offense to my left leg and kicked out when I gave her a kick for not responding. She halted once and got sticky, but it seemed more of a brat move vs her scheming to do a Black Beauty rear. I was still nervous, but continued to push her to walk on.

The lesson started about 5 minutes later and I am pleased to say it was a really, really good lesson with many aha moments! We worked on bringing Annie’s poll higher and having her stay above the vertical during transitions and when she wanted to evade, some turn on the forehand, snappy upwards transitions, steady tempo, circles (because holy shit it feels like riding a drunk dolphin), and giving her more support as a rider (instead of yanno, just sitting there).

Some take-aways (which are things that I should have remembered):


The canter work left much to be desired, simply because Mare was tired and the fact I wanted to canter on a circle was difficult for her. We did what we could and got a canter in both directions for a limited time – something we will revisit in another lesson because she simply was just too exhausted.

Still, she tried very, very hard and was good about everything, including when another horse joined us mid-lesson. It wouldn’t have been a very challenging lesson for a seasoned horse, but it was just long enough and just difficult enough for Annie’s baby brain. We are still very directionally challenged, but she definitely felt a lot more malleable (save for the end of the lesson when Horse just could not Horse anymore).

Trainer K said she really likes her, thinks she will be a great partner for me, and basically told me what everyone else has been telling me about the whole nerves thing. Things will get better, and having just the one lesson has already improved my confidence tenfold – and I have already began planning out weekly (or biweekly) lessons into our schedule. Mare needs to learn how to load like a proper lady and we need some hand-holding.

After the lesson, a friend stuck around to help me to load Annie but apparently Annie was too tired to argue (or maybe she knew we were going home?) and loaded like a seasoned pro… figures.

As a weird sidenote, it is kind of neat comparing my first ride on her at Barn C to the videos and pictures that were taken at the lesson. She isn't so tucked up and tight anymore - it'll be interesting to see her unfurl herself, fill in those muscles, and really take the contact. I'm excited at the prospective future.
Posted by Cathryn at 6:37 PM