A local club was hosting a “fun jumping day” on Monday, which also was a holiday in BC (Family Day). I had tentatively agreed to go, mostly to take Annie to experience a busier atmosphere and more of a “show like” feel. After our fantastic lesson the day before, I didn’t hesitate to rehitch the trailer Monday morning and coheres a friend in joining me.


I picked up N and her horse AJ first since I wasn’t sure if Annie was going to load solo and I didn’t want to waste time begging and bargaining with her like I did the day before. N offered to help load, so when we stopped to grab Annie I was pretty pleased she walked on after minimal hesitation.
At the grounds, she was pretty good, just looking around at other horses and horse trailers entering the area. She ate a good amount of hay and was well-behaved even when N put AJ on the other side of the trailer to tack up. 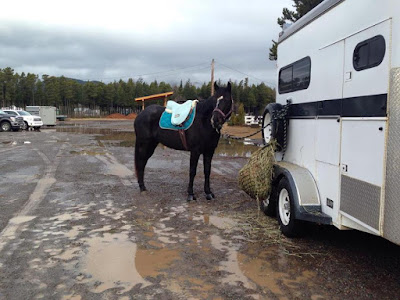 She was good being tied to the trailer, except for when N took AJ away. She had a bit of a melt-down pawing and snorting. I let her continue to be stupid until she calmed a bit and then I untied her and took her into the indoor.

It was a very lax environment and the event actually ran somewhat like a group lesson – Trainer K was there giving instruction. It was kind of neat to see, especially because this whole event was free and Trainer K donated her time to help a few of us out with jumping. A lot of people who attended hadn’t jumped yet this year so there was A LOT of fresh horse flesh cantering around the arena.
Unfortunately, a lot of people did not RSVP so instead of having 17 total riders, we ended up with 25 or so. For reals. There were three groups, and after much deliberation about who would go in what groups, we finally figured it all out.

^ First time through with a jump. We just rush rush rush.

N and I were in group two, which meant we were over an hour early, but that was ok. We sat and watched other horses go around and it was good for Annie to stand quiet in the indoor while other horses were ridden in the arena.

When it came to be our turn, I could tell Annie had bonded quite heavily with AJ and didn’t want him out of her sight. Trainer K gave me a leg up and Annie jigged off, nervous and anxious. I, on the other hand, felt just fine!

^ Through a teeny tiny line.

I didn’t really ask for much of her, because I could feel her brain spilling out a bit, but she was pretty solid the entire hour we were in the arena. And oh my god, the arena was CHAOS. There were probably 10 horses in the arena with us, of varied levels and disciplines and an entire jump course littered throughout. There was not much room to breathe, let alone try and get some quality work in (I almost ran into a few people because Mare was like “Nope, Imma just keep trotting” and the person in front of me abruptly came to a walk).

And literally, other horses in the lesson where freaking right out. One horse was bucking and kicking the wall while another horse was spooking hard at whatever it’s Arab mind saw.


^ The sassiest bounces you ever did see.

Trainer K had half of us sit in the middle so the other half could canter around the outside perimeter of the fence and when it came my turn to be on the rail, I had already decided I was just going to trot but somehow I grew a giant size of testicles and asked for a canter. And boy, I got it! It was quiet and discombobulated, but I got it!! With several other horses cantering! I looked up into the stands where Show Buddy was sitting and she legit gave a big fist pump to the air! Woohoo.

The rest of the lesson went really well. Annie was nervous and jigged for almost the entire hour whenever we were supposed to be walking and waiting for our turn. But, she didn’t do anything bad and near the very end, she parked quietly next to another friends horse and stood on a long rein.
We fumbled through a lot of our first attempts through a gymnastics line, but that’s what it’s all about. We got some good little baby jumps and we had some nice little canter departs.

And you guys, Annie jumped her first full course!! It was very, very messy because holy shit there were people and horses everywhere and uhm, we can’t steer, but we did it!!


^ It was messy and disgusting, but I'll call it a win!

I am so very proud of her. It wasn’t perfect, but I got a lot of compliments from a few riding friends and acquaintances. The fact that Annie has had such little done with her and is already starting to show how honest she is, is awesome. It can only go up from here, and I truly hope it does.
Posted by Cathryn at 7:00 AM