Initially, I was going to stuff all the information about Annie into one blog post, but I figured it would be too messy and long to read, so here is the recount of my first meeting and overall impression of the new kid on the block.

Being that I wasn't quite certain what I was getting into, I was a bit anxious for her to finally arrive so I could finally assess her. It was a tense few days when she was not delivered on the dates we had first agreed upon, but Mother Nature isn't one to give notice of impeding snow storms and sub-zero temperatures. Plus, I'd rather have my horse arrive in one piece vs the alternative.

Yesterday, the Boyfriend and I drove the 45minutes to the next town's riding grounds (fun tip: you may recognize the indoor arena from Spud's lessons last year) and anxiously awaited Annie's arrival. A few close friends who were interested in meeting her met us there and we stood out in the freezing cold (it was about -23C with the windchill) chattering excitedly.

I had unloaded my saddle and such from the truck, and was in the process of bringing my tack into the indoor when the hauler arrived and we hurriedly wandered out to watch Annie unload.

The hauler's trailer had quite a large step up and it took some coaxing for Annie to make the leap out and down. Her exit from said trailer lacked a lot of grace, but she made up for it by casually observing her surroundings and blowing softly from her nose. I pulled the sheet the hauler had tossed over her to keep her warm during the trip off and we wandered over to the indoor where we would be out of the wind.

A large portion of snow had blown up against the indoor arena's doors and it took some awkward two-stepping to open the door, tip-toe around it, and then finally emerge into the indoor. She blew and snorted at my saddle sitting on the saddle rack before we turned her loose in the arena to stretch her legs from the 6 hour drive.

To almost everyone's surprise, she casually walked all over the arena, sniffing along the ground and checking out all the signs and other interesting items without so much as a spook or snort. In an attempt to decipher what kind of mood she was in, I swung a lead-rope at her and clucked to see if she would take off bucking and carrying on, but she literally just jogged around the arena and stopped when I was far enough away. To get her to canter, it took two of us to convince her, and she cantered for about 11 strides before walking again.

Crazy mare I tell ya.

The main purpose for this was to assess her before I got on. I'm not as young as I used to be and don't take the chances I used to take, so chasing her around the arena to see if she was going to take off galloping, bucking, etc, was a chance for me to get a feel for her personality. The fact she was pretty lazy was a good indication she wasn't going to kill me.

After that was done, I caught and led her to the center of the arena and just played around - picking up her feet, touching her ears, tugging her tail and forelock, poking her udder and teats (I'm so mean), backing her up, asking her to yield her haunches and shoulders, etc. And when I got to touching her muzzle to check her teeth, she was suuuuuper offended. I noted this and carried on with the rest of my assessment.

Once I deemed things good, I led her over to the make-shift stalls to tack her up. She tied good, although she was just a little wiggly (which is normal). Quiet to saddle, quiet to have the girth done up. An issue blossomed when I went to bridle her, where she gave me a very large NO and wouldn't even let me touch her muzzle. Based off of the knowledge I received from the owner, she had had her teeth done late last year (2016) and was a bit funny about the bridling thing, but it had gotten much better so it is possible this is her attempting to test me. We will work on it and if she continues the behavior, or it worsens, I'll have to get her teeth looked at just in case.

During my attempts to bridle her, I just kept at her with a steady pressure, giving a few growls here or there where she was rude. It took about 2 minutes to bridle her, but once it was on, she was fine and complacent. She stood quietly for the remainder of me getting ready, which included when I walked away to put my helmet on and she stood ground tied without so much as a blink of an eye.

The other issue that cropped up was when I went to get on her - she swings her hips away from the mounting block. I wasn't really prepared and kind of just skipped off the block, so I had to reline her up and re-mount. She is wiggly there, so it'll take time to work on but I'm not sure if she is familiar with blocks or if she knows what they are all about and she is just being a smartass. 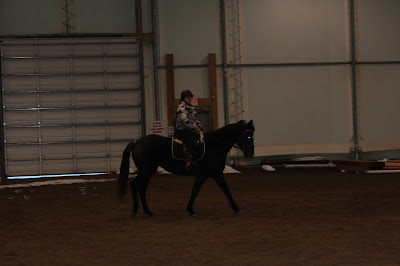 We took off at a walk, and she jogged several times on me before we came to a clear understanding that she needs to WALK. It was not malicious at all. I worked her walk, trot, and canter and aside from feeling very unbalanced and weak, she is very solid! Just willing to please and strives to do the right thing for her rider. Any fears of uncertainties I had about riding a young horse melted away and I immediately trusted her (this isn't to say I am not cautious).

I rode her around with kid gloves - not asking too much and not expecting too much. I don't think she has done much lunging or otherwise, so we will be adding that to her regime to help her with the canter stuff since she is very unbalanced. 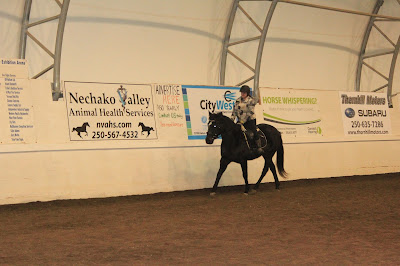 A friend of mine hopped on and rode her around quickly before I hopped back on again and pushed a wee bit more than I had previously. She certainly feels like a young horse - the steering isn't very refined, she ruuuuuns into her canter transitions, she is very unbalanced and unsteady, but she shows a very large amount of promise.

Much like Emma, my posts surrounding her will be all about exciting baby stuff as we grow and learn. Things like, "Omg we cantered without doing an extended trot first" and "We halted when we meant to!" will be the forefront of this blog, but I am excited for the journey and excited to see Annie develop and grow.

With limited access to an indoor arena, and due to the inclement weather we currently have, Operation In-Hand Bootcamp has commenced. Not that she is terrible leading or anything - but I wanted to refine a few things and really make clear and concise indications about what is tolerated and what isn't. I will also be working on the mouth thing (if anyone has any tips or advice, please feel free to add).

This In-Hand Bootcamp is something I have done with quite a few horses I have "restarted" in previous years and it really sets the tone for a working relationship. The foundation of trust starts on the ground, and with it being terribly icey out and unsafe for riding activities (unless I haul), I don't want to rush into things.
Posted by Cathryn at 7:38 PM