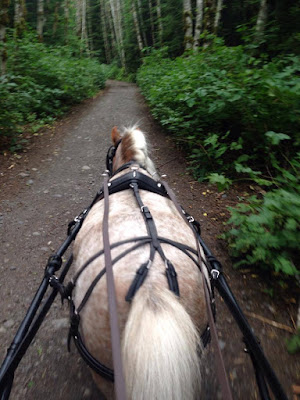 Since the horse show I had putzed around a bit on Finn, but was holding off on serious riding until he had his chiropractic appointment. I didn't feel like it would be fair to drill anything in to him, especially since it would just end in me getting frustrated and flustered anyways.

So Spud has been pulled out more than usual and we've put in some serious miles this July. We've gone approximately 35km thus far, with many more to be added on! For a pudgy pony, he has some serious endurance.


In addition to the endurance aspect of our drives, I've begun implementing some mock "cones" drills with a bunch of random spare tires that used to be a cross country jump at one point. Spacing out the tires gave me the ability to do some "cones courses" and to work on more refined turns and speed control. I don't have a problem letting Spud choose his pace and such during the endurance stuff, but when it comes to speed + tight turns, there has to be some serious communication going on to prevent any cart tipping or otherwise.

A friend of mine who is pretty interested in Spud and the whole driving thing is up here visiting so I've drug him out to drive me with the last few times and had him try out all his new gears since the last time he visited. It's also super fun to see someone else drive him considering I've been his main driver for a good portion of his career.
I'm gearing up for a show at the end of August, which will be our only show of the year. I have high expectations, but at the same time, I'm not going to put the pressure on him. He's still quite green and this will be the first (of many!) shows in his career.

In Finn news, I trailered him out on Wednesday to see the chiropractor/body worker that Finn's owner normally uses (not the same one who has adjusted Suzie and Spud). The appointment went well and the findings were quite interesting!

Finn's entire pelvis was shifted and his right femur was actually turned and was crooked. His ribs were out in multiple places, as well as his spine.

In all honesty, he was a mess.

But I shouldn't be surprised. He hadn't been adjusted in nearly two years (since he was retired) and I had been riding him more than he had been in the last while.

The body worker took about 45 minutes to adjust, re-adjust, and work out knots and such. Finn's back quite literally came up about 2 full inches and the body worker showed me how actually fucked up his hip was (how did I not notice, like rly?).

It also explains our "lameness" on the left rein.

Three days off for Mr. Finn and then we will get back to our regularly scheduled program. Hopefully all of the adjustments help his striding, transitions, and overall work ethic. It's amazing what professionals can find with just one look.
Posted by Cathryn at 7:12 PM