The little gaffer is finally home! Initially, he was going to be brought up by the Trainer and meet us halfway, since it would be over a 16hr drive to get him if we went the entire way. Unfortunately, circumstances changed and I had to find a ride for him to the half way point. After some very tense moments and some major anxiety, it turned out that one of the horses I was hauling was continuing on the next day to where Spud was. After some brief talking, the hauler agreed to bring Spud to us since he would have an empty trailer anyways.

Spud arrived in the evening on Friday after a 7hr haul - he was chilly, considering it was -35. BRRR!! I let him walk around the indoor for a bit and he rolled and followed me around.We set him up in a stall with some feed and water and he was cool as a cucumber. Saturday morning we loaded him and another mare up and hit the road. He travelled quiet and calmly, which was good.

After we had dropped off the other mare we were hauling, Spud had the run of the entire trailer, which was good. He is a very good hauler, just stands quietly and doesn't make a fuss. 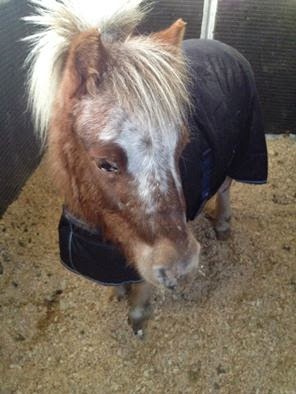 After the 6.5hr drive, he met Suzie for the first time. There was no squealing, no kicking or anything else (well, Suzie DID pin her ears at him when he tried to eat next to her). I'm pretty sure it was love at first sight, which was totally adorable to see. He settled right in and chomped down some hay (after Suzie attempted to bite him). It has been pretty uneventful thus far, but later today I am going to be hitching him up to the cart. I debated waiting a bit longer, but he is pretty quiet and mellow, as well as I go back to work tomorrow so any play time we have will be very, very limited with the lack of daylight!

Email ThisBlogThis!Share to TwitterShare to FacebookShare to Pinterest
Labels: spud is home